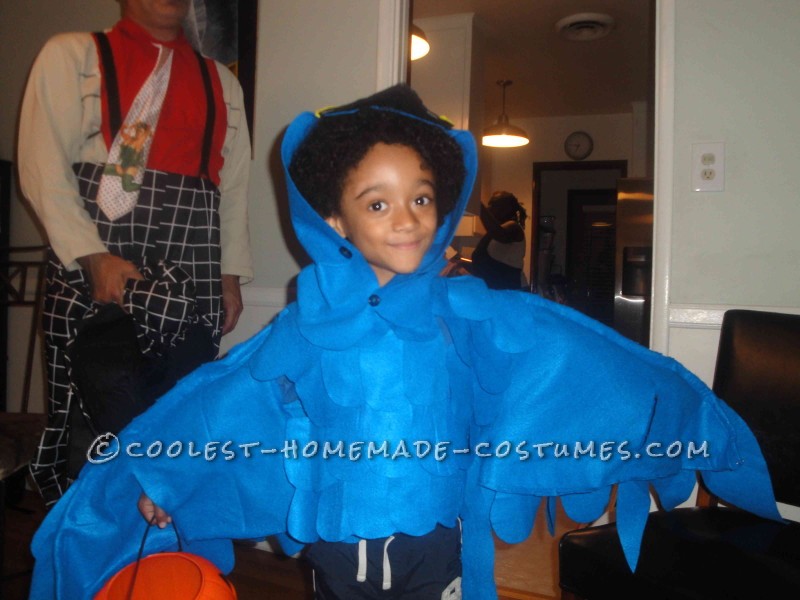 So Halloween is 4 weeks away, my daughter wants a standard buy it at Spirit Halloween costume and my 6 year old son wants to be a blue Macaw parrot similar to the one in his favorite movie, Rio. Good enough, or so I thought, I can find both costumes online or in any store, I’ve got time, right? Week one, daughter’s costume found, son’s costume no where to be found. He likes none he sees online and we see nothing in the stores. Panic sets in. What’s wrong with being Darth Vader I suggest to him, no he says…I want to be a blue Macaw parrot. I haven’t sewed anything since a simple tear in a tank top but I keep passing by Joann’s Fabric store in search of this mysterious parrot costume.

Week two I stop in to Joann’s fabrics, I see fabric that could do the trick, but what trick, I haven’t a thought about what this would look like, but I’ve got to do something right? I run home go online search what does a blue macaw parrot look like? I find several real life images and several costumes, one looks very difficult to make, as a matter of fact they all look difficult to make especially without a sewing machine or talent….I begin the process by drawing on liner fabric the outline for the wings by having my son lay down and stretch out his arms, after that I have no idea. I check out more pictures of costumes that I like and take a page from that masterfully done book.

End of week two my son asks…is the costume ready yet? Really? Week three is more of the thinking week, how could this be done in two weeks? YIKES!! then a revelation…I have to make this costume or no costume for my 6 year old this year. I begin by thinking just put two pieces of fabric together for the wings, and figure the rest out as you go. It can’t be two pieces because where does his body go so he just slips into the wings as though the wings are his arms…good idea.  Then cut out circular pieces of fabric to make the feathers on the back, looking good so far and friends are shocked at the progress and how good it looks far from completion, then cut the tail feathers stitch them together, by hand, then stitch them to the shirt that my son will wear Halloween night.

Now for the hood, how do you make a hood, Google…how to make a hood? Several hoods later I’ve made the hood which fits nicely over the top of the tshirt, I make a button hole, sew on a button to keep the hood in place and attach a beak and eyes to complete the look.  What do I do to cover the front of the whale tshirt. More feathers this time not stitched but glued on. Oh, that glue doesn’t really work, of course not, so back to hand stitching the feathers onto the tshirt. No more whale tshirt for you…feather tshirt. Thank goodness it wasn’t a favorite.

Day before Halloween costume is ready, but will it fit? and what will it look like on? Well not too shabby although my son hates the hood, says its too itchy, aka, could’ve done without making that but what’s a blue Macaw costume without the head. He got oohs and awws…..and who made that? I couldn’t believe it was me. Beginner’s luck I guess.. 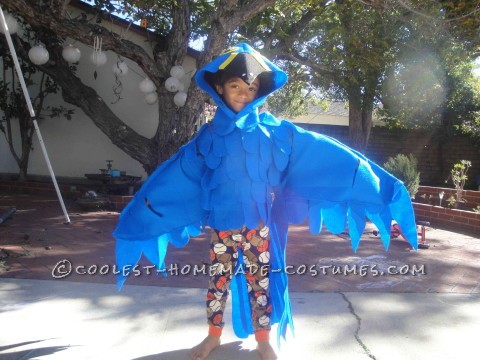 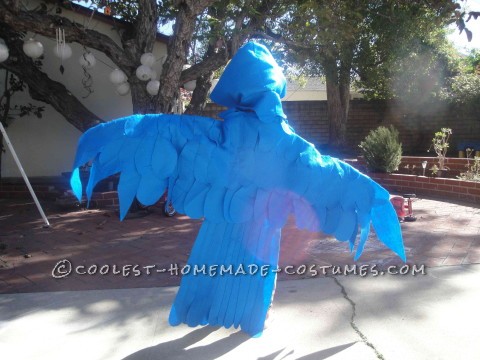