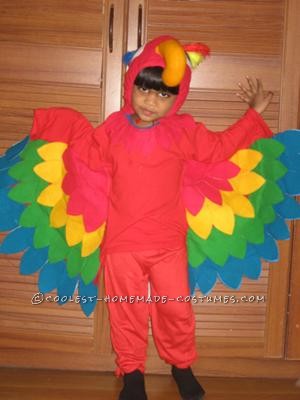 My son Aaron was selected to be a parrot at his preschool fancy dress contest. I was very apprehensive at first but going through this website “Coolest homemade costumes” I got some great ideas and also executed it well. This is what I did for my child parrot costume.

First, I bought a red t-shirt with a hood – 2 sizes bigger than his usual size. I altered the sleeves and the sides of the t-shirt but didn’t change the length. Next, I took 1 meter of red cotton fabric, spread it out and placed it below the t-shirt. On the red fabric, I drew the span between the wrist to the hip of the t-shirt in a curvature and cut it out. You get 2 pieces in the shape of quadrants. I stitched these 2 pieces in place, that is, below each sleeve and along the sides of the body. Now when you look at the t-shirt it would look like a t-shirt with batman wings. Half the work complete.

Next, I bought 1 meter each of felt material in 4 different colors- blue, green, yellow and red. I drew a feather on thick cardboard free- hand and cut it out. I used this as a stencil to draw feathers on each colored felt material. I cut out 48 blue feathers, 40 green feathers, 28 yellow feathers and 20 red feathers.

Starting with 1 wing (the inner side), I neatly placed a row of 12 blue feathers, vertically, on the outward side of the wing. I pinned it in place using office pins. Next, I arranged 10 green feathers in a row, slightly overlapping the blue feathers. I pinned this in place using office pins. I did the same with the yellow (7 in a row) and red (4 in a row) feathers. I placed the last (5th) red feather horizontally over the top of the red row of feathers and pinned it in place. I repeated the same procedure with the other wing (inner side).

I turned the t-shirt over and did the same procedure that I had done on the insides of the wing but this time taking care that blue row on the inside aligned with the blue row outside and pinning it in place using office pins. I took care of each color row alignment. This took me the most time.

Next, using the same color thread of each felt material, I stitched the feathers in place on the red cotton fabric in rows. I removed all the office pins and stuck each feather in place using hot glue/ fabric glue.

For the tail, I cut out a long inverted triangle in red cotton fabric. I cut out 3 more blue feathers, 3 green, 4 yellow and 5 red feathers. Starting with 1 blue feather placed on the tip of the triangle, I stitched it in place. The next row was with 2 blue feathers. The next with 3 green feathers, then the yellow and finally the red row. I finally stitched the tail on the back of the t-shirt.

I drew the beak free- hand on dark yellow felt, cut it out, stitched it and stuffed it with cotton and stitched in place on the hood. For the eyes, I cut out 2 oval shapes in white felt and stitched it in place (on either sides of the beak) on the hood. I stuck 2 black bunny eyes over the white felt eye to make it look more real. For the final touch, I attached three feathers in red, blue and yellow on the top (crown) of the hood.

On the day of the contest, my son wore this t-shirt along with red tights and black socks. To complete the look, he said “ki ki ki”. Though this costume took over 5 days to complete, I’m happy and proud of the outcome, my son won the contest. 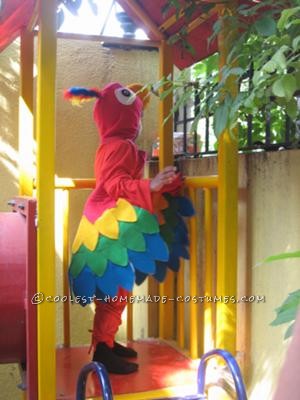