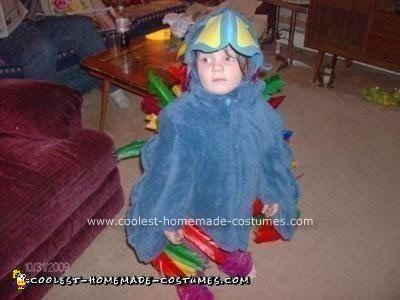 My daughter asked to be a blue bird for Halloween last year. All I could think is how am I going to make a Halloween costume. We took a trip to the local fabric store and I showed her the simplicity pattern 3663. She told me before hand that she wanted a big beak so I took that to mean a toucan or something similar. I couldn’t believe I found this pattern. Then I had to figure out if I could actually make this Bird Costume Idea. I can sew, but I am not that great at it. Then the price of materials kind of scared me. The pattern called for boa covering the entire costume to be the feathers. Well, the fabric store only had pink, red and white boas and my daughter wanted to be blue, that was it.

I checked out the faux fur fleece thinking that could simulate feathers and not be cumbersome. Well, they had red, white and tan, NO BLUE. It was the end of the world. I went to store in the same shopping center to look around (not for Halloween) and found a blue furry fleece blanket for around $8 on clearance. It was definitely the kind I wanted and more than I needed for less than I would have paid at the fabric store. I definitely recommend looking for those clearance blankets they have at most stores. It?s the same material for a better deal.

Well, I started making the costume. It went pretty smooth. I found blue Velcro that blended into the blue furry fleece. I used craft foam for the beak and my sewing machine went through it. I did struggle with that a few times. Maybe my needle was too big, but if it was too small it would have just broke.

Now the feathers! I tried to sew those and they even broke a jean heavy duty needle. I changed the needle and kept trying because it was late at night on a weekend. I did give up knowing there must be a better way. I went back to the fabric/craft store the next day and found some no sew press on adhesive. I tried it and they stuck.

Now for the tail! A bird has to have a tail. I bought a half sphere floral foam and sewed two strips of fabric across it hold it to the costume and attached it to the back portion of the costume. Then I stuck a lot of feathers into it. You can’t see it too well above, you can kind of see them sticking out around her head. There is a globe of feathers behind her.

The tail worked great for trick or treating until my niece that it would be fun to pluck the birds tail. The foam didn’t hold up to well.

I am trying to figure out something else the fix the costume because I keep all the old costumes. You never know when you will need them again. I’m thinking I could somehow use the no sew press on adhesive, but it has been a year and I still haven’t tried to fix it and the cats are playing with all the loose feathers they find no matter how I try to hide them. I forgot to mention I didn’t have to pay for the feather because someone’s mom was cleaning out her house because she was moving and I got a box of all kinds of stuff and there was a large bag of feathers in there. Proves one woman’s junk is another woman’s treasure.

Cost: $20 (plus the spare things I had around the house)