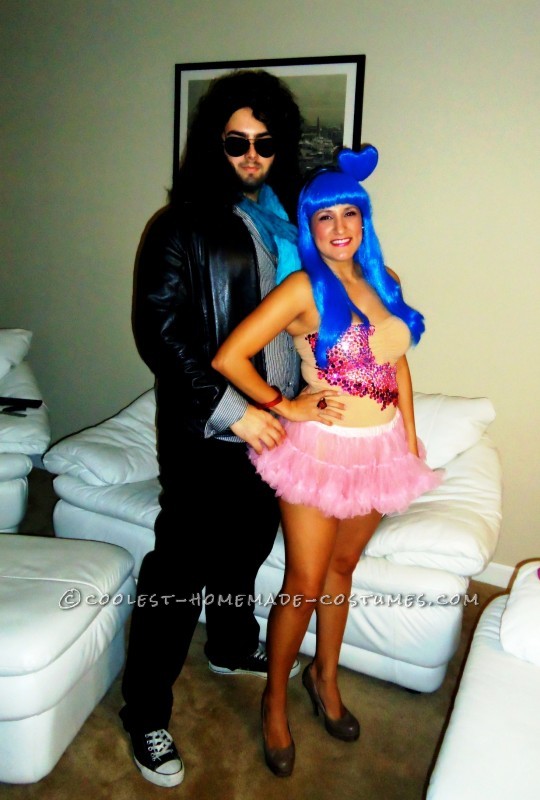 It was our first Halloween together and as a couple, our first costume pick was essential. My boyfriend and I were on our way to the Halloween store and we were throwing out ideas of what we might want to pick out.   Suddenly, a song by Katy Perry came on the radio and it dawned on me, what better than a blinged-out Katy Perry and Russell Brandt couple costume.

At the Halloween store, we picked up a black long-haired wig for “Russell” and Katy Perry’s iconic blue wig with the heart on it.  I Googled some images of Katy Perry and Russell and decided we can make our own costumes.  For Katy Perry I purchased a pink pettie coat skirt and some jewels at the local craft store and had a nude leotard at home.  At home, I separated the jewels by color (which took a bit of my time) and started hot glue gunning the jewels onto the leotard in a pretty pattern which took about 3 days to complete. It was a tedious task but this was the most important part of the costume and well worth it. On Halloween, I put my bedazzled leotard on, pink pettie coat skirt, blue wig, and paired it with nude shoes.  I did some make up and pink lip stick and was ready to meet my Russell.

Russell’s costume was easy, as my boyfriend had most of the clothes already in his closet.  He wore black jeans, a white button down shirt that we left half unbuttoned, a black leather jacket and converse sneakers.  We added one of my scarves and a chained necklace. He put on the wig and some sunglasses, and we then shaded in his facial hair with some black eyeshadow for the full effect.  When we were done, we were both in awe as to how great we looked!

We made our first Halloween debut in Lincon Road which was packed with people.  It was great when we would hear our names, “Katy Perry!” and “Russell” being shouted out as we walked by. There was a handful of people that even stopped us to take pictures with them.  For our first Halloween, I can definitely say it was a success!!