My nephew requested an astronaut costume for Halloween this year. (This was pretty lucky as it went well with his older brother’s sun costume!) To make this homemade costume, I used a pattern. The material I used is vinyl. The patches were ordered off of the internet.

One Small Step for Man 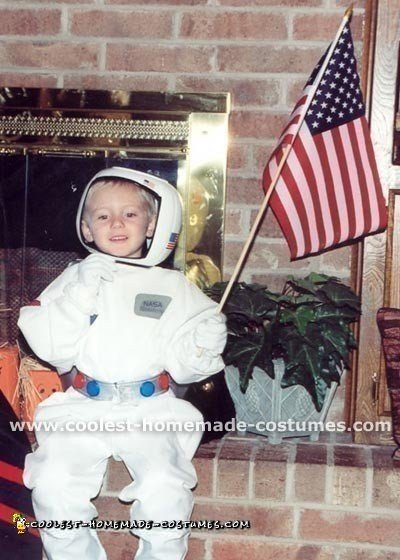 For this costume, I made a simple one piece jumpsuit. I found some clip art and made the patches for “NASA” and transferred them to iron on paper.

For the helmet, I used a plastic pumpkin and spray painted it white. I used a dremel tool to cut out the front for the face. I added some reflectors. (In addition, this is also great for seeing the child at night).

For the rocket booster backpack of the costume I used some shiny Capri pants I got at a garage sale and cut the legs off and sewed the end shut and stuffed it. I made two and attached them to the belt with more reflectors. Wow, looks like he could walk on the moon with his costume!