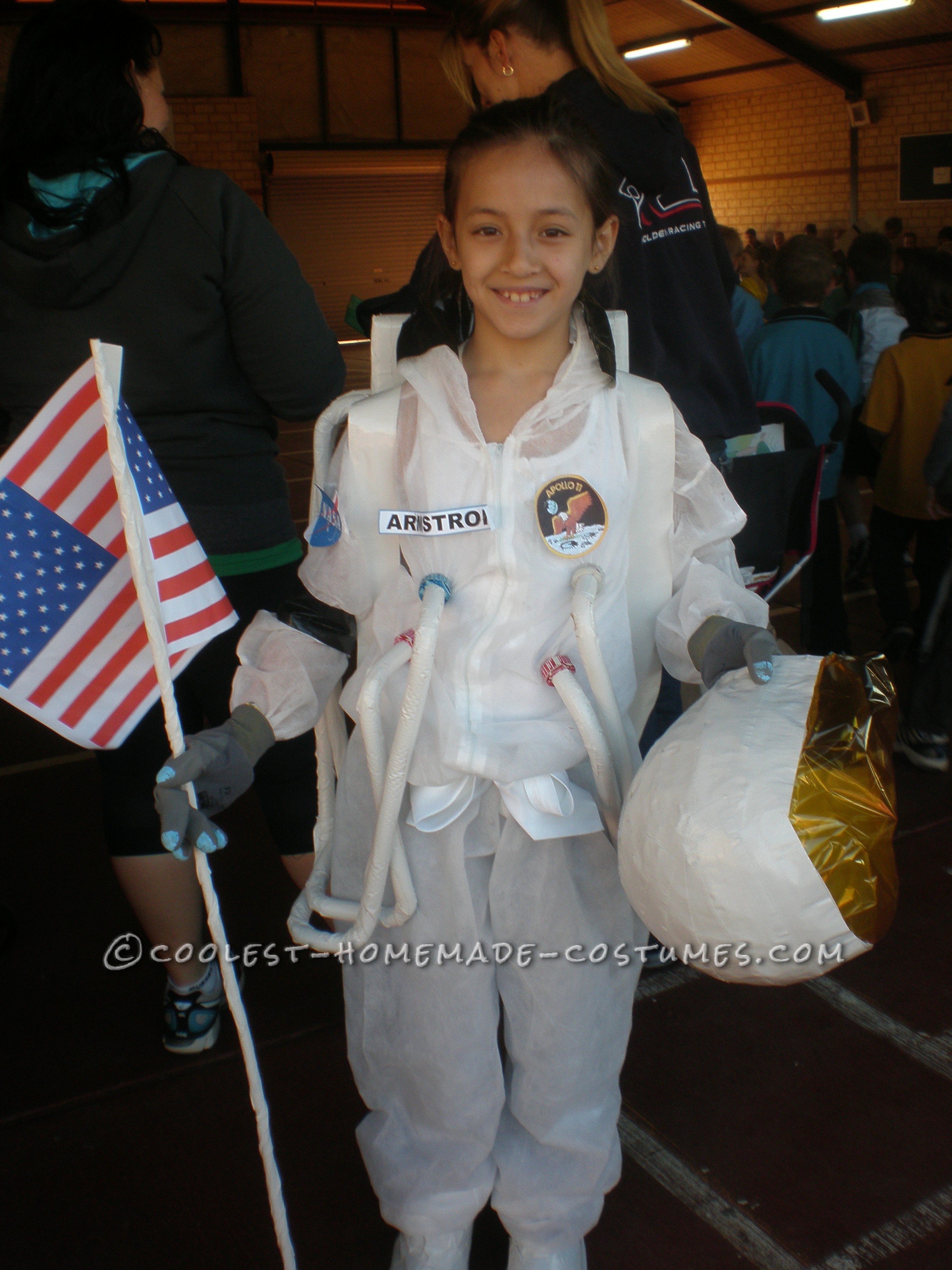 Last year our daughters’ Book Week theme was Champions. We love Book Week in our family as we have made it a family affair and everyone gets involved in the project. Our eldest daughter Isabella has always loved anything to do with astronomy so when we asked her to think about people in history who she admired, she said the first man on the moon. Well of course the crazy Book Week bells just went off in my head when she said this, and hence the project of making a Champion Neil Armstrong costume was born.

I first worked out what I could make with what we had around the house and then made a little shopping list for any extras. We have always tried to use anything existing we have around the house, which I just love seeing what we can come up with but there are always a few things supplies that we have had to go out and buy.

So I worked out for the helmet I would papermache around the Leapfrog Globe the girls had with pva glue as if I used a balloon I was scared that she would have an egg shaped helmet, whereas the globe was beautifully round and big. I watered down the pva glue and used toilet paper. I applied over three nights, about six layers of t.paper. Now I didn’t papermache right to the bottom of the globe, more like three quarters down, as I had to make sure when it dried I could shimmy it off the globe itself. Once it had dried it only took a little bit of lifting away from the Globe but it came away quite nicely. I then cut out the front piece of the helmet and with a piece of yellow cellophane glued this over the gap. It didn’t matter that the glue dried a bit messy on the cellophane as to make the helmet sturdier, I used white fabric tape and taped from top to bottom over the papermache. It looked great and all of these supplies we already had in the garage.

We didn’t want our daughter to wear white clothes, we really wanted to make it as authentic as a dressup costume could be, so we bought a $5.00 paint suit from the local hardware store (size medium which was absolutely huge on her) and tied a belt around her waist and just hitched it up. This way it was still billowy but not massively oversized. I then went about checking images of Neil Armstrong on the web and made sure I printed off all the logos and just stapled these onto her suit. The pack on the back was made from a box we had and again I taped the entire thing with white fabric tape. I started to paint the box but it didn’t look good but when I began to tape it, it looked consistent with the helmet and had a better finish. The costume was starting to take shape but it still needed the hoses from the back pack to the suit. This is where my fabulous and just as crazy about Book Week husband came in. He went and bought from the hardware store about 3metres of grey piping, cut them to shape and then cut holes in the box and inserted them in and also in the suit. To hold the piping in place in the suit, he had also bought some plastic screws that actually were made to fit onto the pipes. We painted the plastic screws red and blue and also covered them with the white fabric tape. My husband had to go and buy one more roll of the white tape as this was proving very crucial to the finish of the costume. Working down to the gloves, my daughter wore her dad’s work gloves which were already grey but I painted the finger tips in blue. This blue paint was also used on the tips of the boots. Our daughter Isabella wasn’t keen on wearing gumboots, white ones at that, but I came up with the idea of her wearing her winter ugg boots and I would…you guessed it, tape them with white fabric tape. I have to say, they looked awesome!!!

So now for the finishing touches, we used one of our garden stakes and wrapped it with the white fabric tape. I printed off the USA flag twice and glued these back to back, then taped this on the stick. And with that our Neil Armstrong had her flag and was complete.

We had been working on our daughter’s costume for about two weeks and in conjunction with this she had been reading her book about Neil Armstrong, so became quite attached to the costume and we could see that she really was quite proud to be going as someone who truly was a Champion. Unfortunately the weekend prior to her Book Week Costume Parade, we heard the sad news of Neil Armstrong’s passing. As I had been searching for Neil Armstrong on the web for any additional information about the costume, the last time I looked was in the weekend when he passed and found one of many news clips. I couldn’t believe it and didn’t know how I would break the news to my daughter. She was so upset, as were we. This wasn’t just a costume making exercise, we were all learning about a great man. Two days after his passing at the Book Week Parade, our daughter wore a black band on her arm and wore her costume with such pride. She won first place, for her, for us and in honour of a great Champion.

We love Book Week and what it has taught our girls and us.

Our other daughter went as Amelia Earhart, but that’s another winning story! 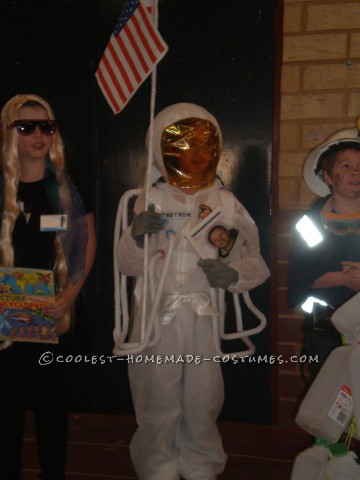 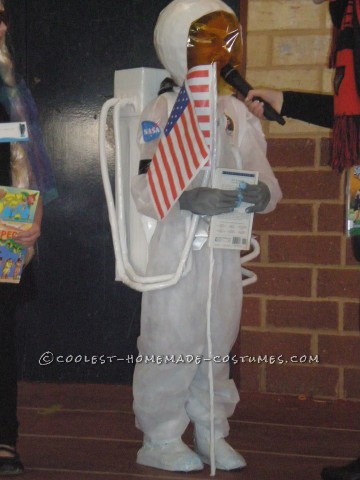 2 thoughts on “Homemade Astronaut Costume in Honor of Neil Armstrong”