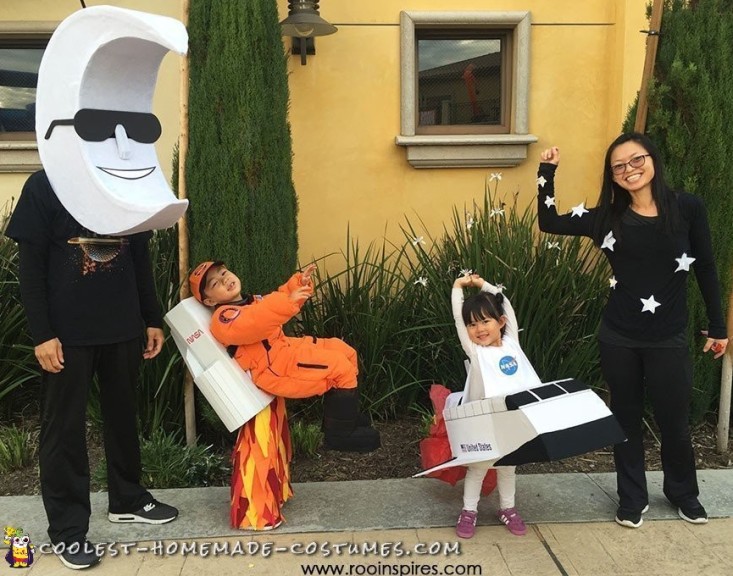 This year our son’s school requested for peaceful costumes of someone from history that made a difference in our lives. He has shown a lot of interest in rocket ships and space lately so he chose to be an astronaut. Our space themed family costumes revolve around his love for space. Materials Most of the materials … Read more 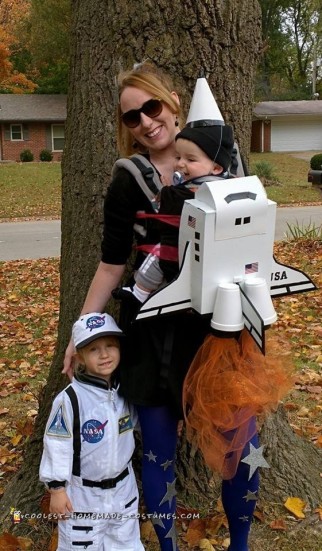 My dear daughter desperately wanted to be an astronaut for Halloween. Who better to be her space shuttle than her baby brother? I made his costume out of cardboard, spray paint, tape, stickers, plastic cups and ribbon. I cut all cardboard to the shape most similarly resembling a real space shuttle. The main portion was … Read more 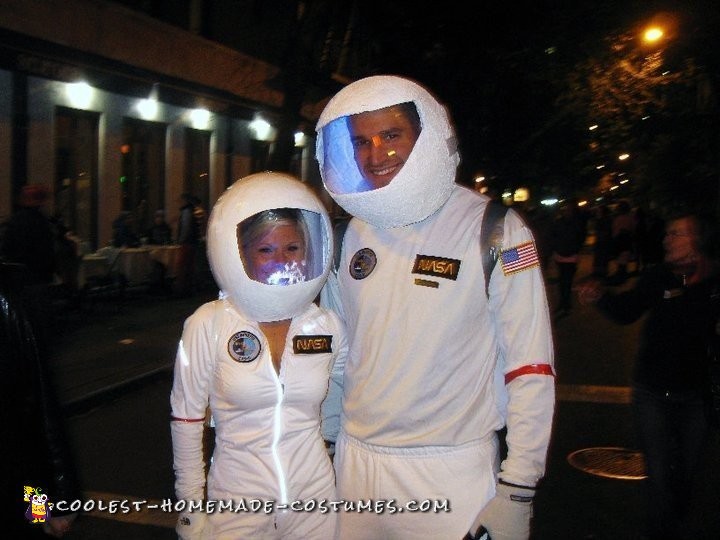 The helmet was the most difficult part in making this costume come to life. I was set on having it glow blue inside, and making it ourselves. It took almost two weeks to paper mache these each night in order to create a thick enough layer that would hold its shape. (Blow a balloon up … Read more 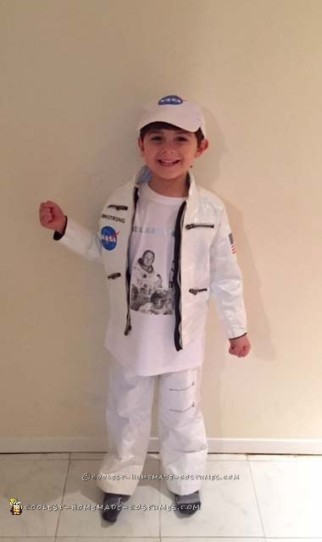 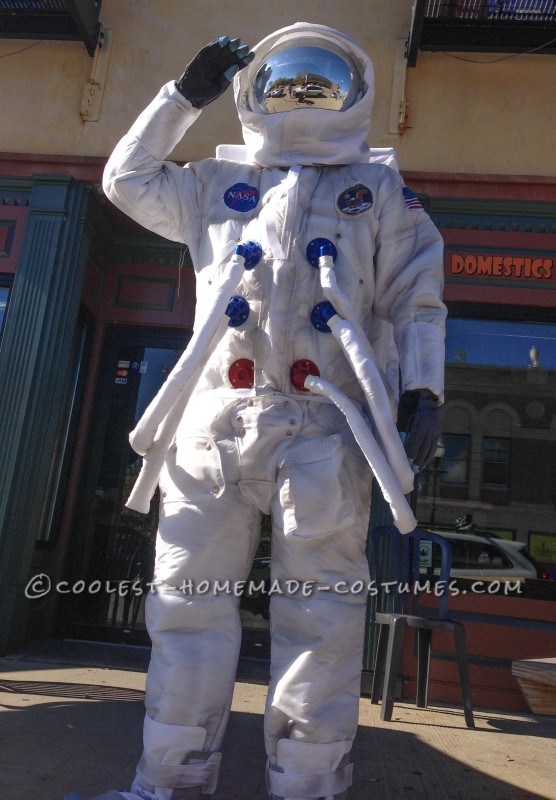 I set out to make this astronaut  costume as part of a “what I wanted to be when I grew up” theme for work.  I had always wanted to be an astronaut from as far back as I can remember. So, when the theme came up at work this year it was a no-brainer. First … Read more 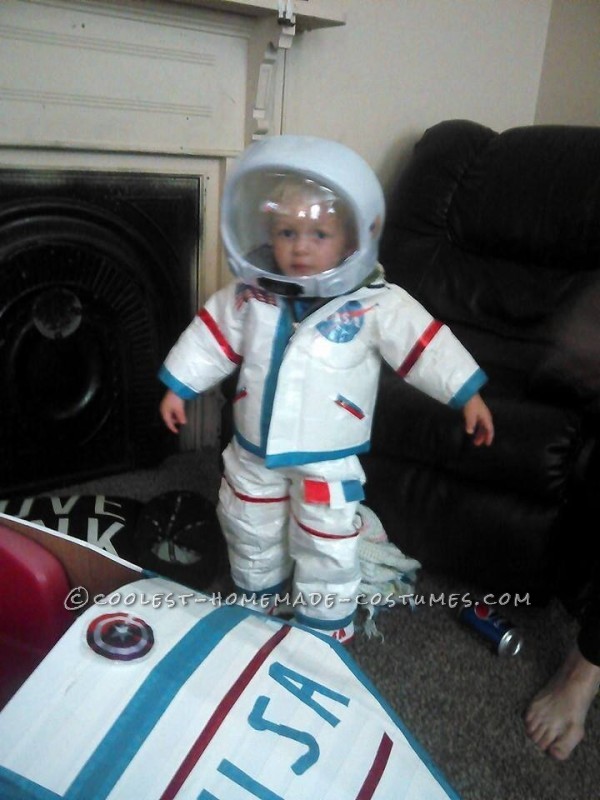 This is my creation from duct tape. I love arts and crafts but one thing is for certain, I never learned how to sew and so this is where the duct tape came into play. This is a toddler astronaut costume, made head to toe out of duct tape. I used hand me down snow … Read more 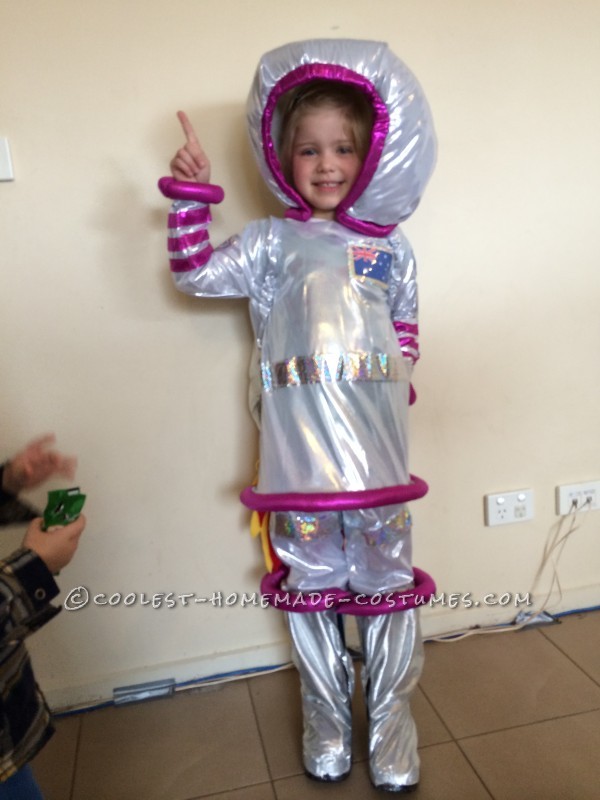 I’m always up for a challenge, so I love to let my kids pick whatever they’d like for Halloween, and then do my best!  My daughter so far has always had some sort of dress (witch, princess, etc), but now, at the age of 4, she chose to be an Astronaut!  However – it had … Read more 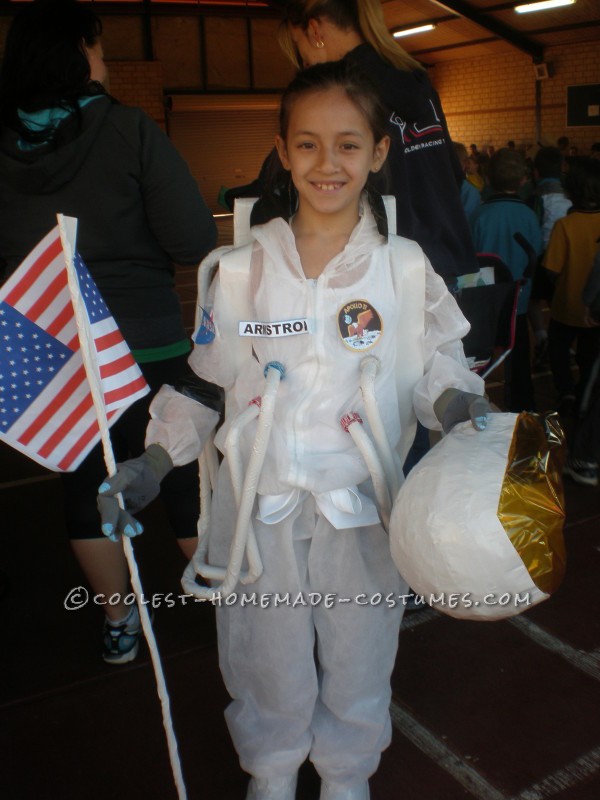 Last year our daughters’ Book Week theme was Champions. We love Book Week in our family as we have made it a family affair and everyone gets involved in the project. Our eldest daughter Isabella has always loved anything to do with astronomy so when we asked her to think about people in history who … Read more 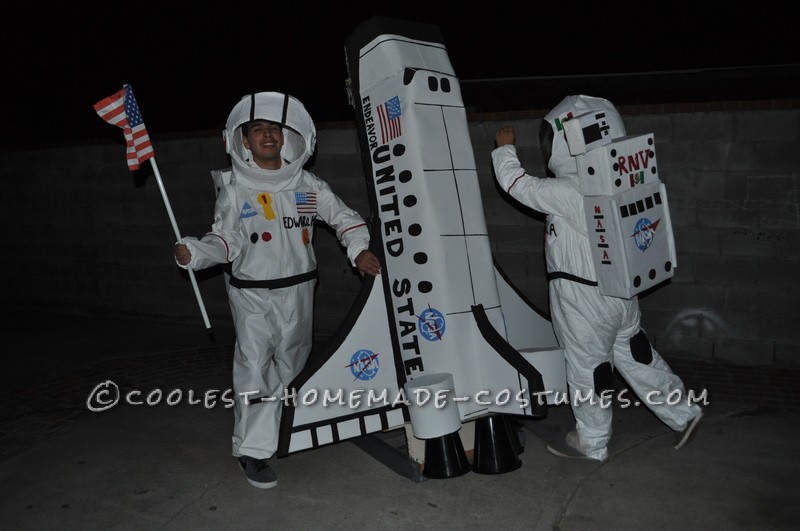 These astronauts costumes were inspired by the one and only first astronaut that landed the American Flag on the moon by Edward H. White. One of the things that inspired me was when the Endeavor final mission landed on L.A.X. I was one of the most fortunate of hundreds of people to go see it … Read more 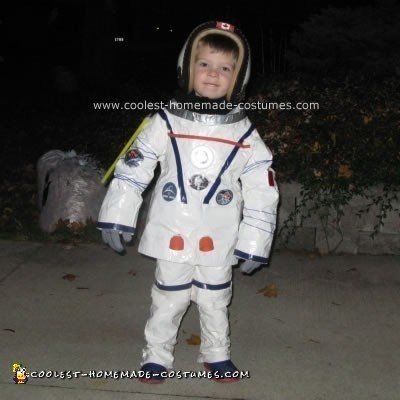 My son wanted to be an astronaut for Halloween so we created this Astronaut Costume for him. We started with an old karate uniform and covered it with white duct tape. We were able to add some detail to the legs by folding the duct tape. The badges were printed off the internet and taped … Read more

My nephew requested an astronaut costume for Halloween this year. (It went well with his older brother’s sun costume!) I used a pattern; the material is vinyl. The patches were ordered off of the internet. Total Spent: $25

For this costume, I made a simple one piece jumpsuit. I found some clipart and made the patches for “NASA” and transferred them to iron on paper. For the helmet, I used a plastic pumpkin and spray painted it white. I used a dremel tool to cut out the front for the face. I added … Read more 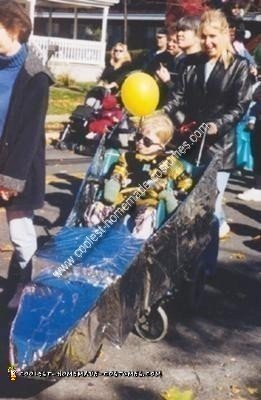 Years ago we read a suggestion in Exceptional Parent magazine to incorporate the wheelchair into the Halloween costume. We’ve had lots of fun doing just that and making this Astronaut in a Rocket (or Driver in a Racecar) Wheelchair Costume! We thought we were making an astronaut in a spaceship costume – but we discovered … Read more 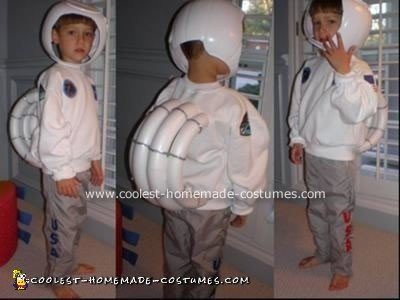 I am super-cheap, so I look for the most inexpensive items for my Halloween costumes. This year I made an astronaut costume. I bought a white sweatshirt for $4 at JoAnn Fabrics. I found NASA patches and logos on the internet – saved the images and printed on Iron-On Transfer paper (cut them out and … Read more 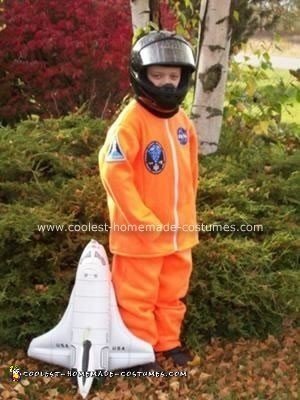 For this Shuttle Astronaut Costume I made a zip up sweatshirt/jacket and sweatpants from orange fleece. (Pattern for both at my local fabric store.) I bought the patches online (just do a search, there are several sites which sell them.) There’s also a US Flag patch on his left arm…they’re available almost anywhere. I took … Read more 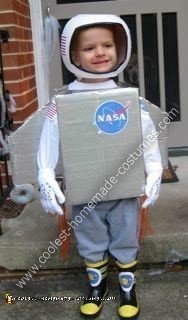 My 3 year old son requested his costume to be “an astronaut in a rocketship” for Halloween this year. Here is how I made this astronaut homemade Halloween costume and rocketship: 1 – I cut a diaper box to fit his torso. I cut a U shaped hole in the top for his head and … Read more 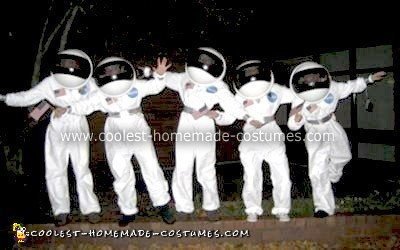 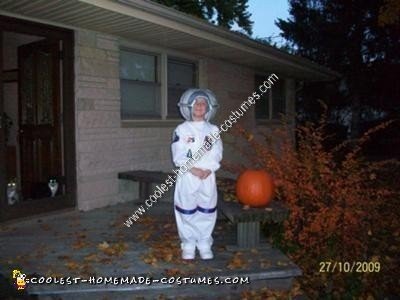 My sister and I made this Homemade Astronaut Halloween Costume Idea for my son. All he wanted to be was an astronaut for Halloween. We stated with a basic white two piece pattern for the suit with actual NASA patch all over. The helmet is made of two salad bowls glued together with silver fabric … Read more 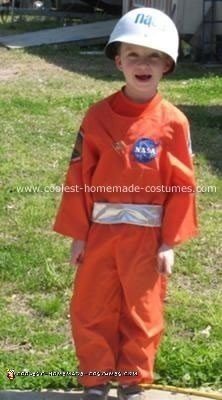 I have always loved to sew. In years past I have always sat down at my sewing machine and sewed almost all my Halloween costumes. I’ve been Minnie Mouse, Bride of Frankenstein, 50’s girl with the Poodle Skirt. When my 8 year-old was little I sewed some of his costumes also. He went one year … Read more 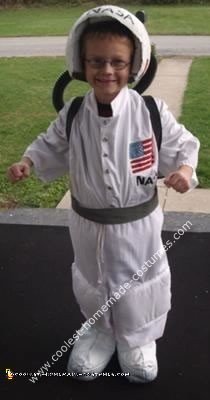 Mikey wanted a Homemade Astronaut Costume this year, so I started with white scrubs pants and a Dr white jacket that I purchased at the thrift store. I resized the back of the coat, shortened the sleeves and hemmed them. I took in the waist on the pants and hemmed them and took a white … Read more 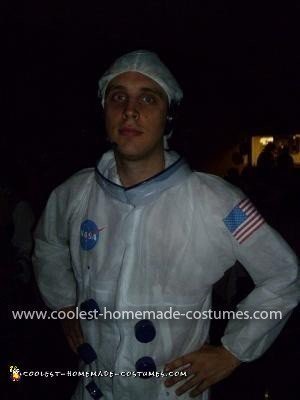 I didn’t know whether to post this Homemade Spaceman Costume or not as I took inspiration from a costume already on the site. The actual astronaut suit is based on the suit posted by Greg B from Bellingham. I’ve decided to submit it though as I’ve added a jetpack and an alternative helmet for those … Read more 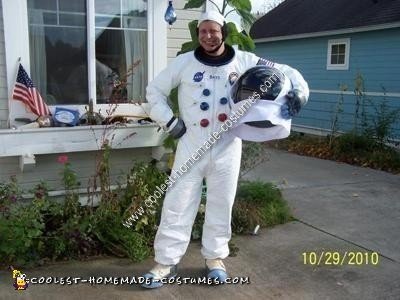