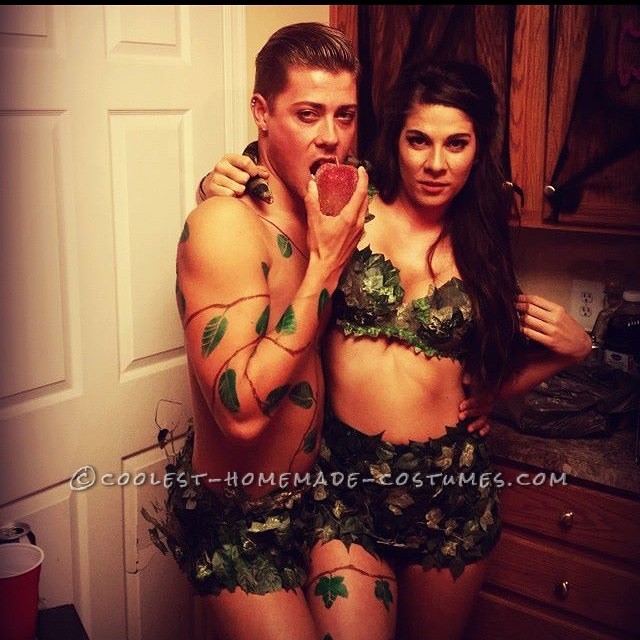 Our couples costume was just sinful this Halloween. Adam and Eve broke out of the garden of Eden and graced the 2014 earth with their presence. We made these costumes with one thing in mind, we better look so good that people will want to take a bite, but that would be forbidden. We gathered all of the supplies from Walmart and Michaels such as the leaves, vines, airbrushing machine, snake, and apple. Eve got a flesh colored bra from Ross for cheap and some high wasted green shorts from Forever 21. Nothing too fancy.

Adam purchased some compression shorts from Walmart to completely cover with leaves. All in all the costumes probably cost $60. We glued a tremendous amount of leaves onto some shorts and a top and airbrushed a vine that wrapped around our torso, arms, and legs. The whole process took about three days to complete mostly consisting of trying to figure out how to use a airbrushing machine womp womp.

We won 2nd place in a couples costume contest at a bar, but ended up losing to a couple who was there for their bachelorette/bachelor party. I feel pretty good for making it to the finals in the couples division (beating out about 20 other couples) considering we had decided on a whim to stop at the bar and join the contest without knowing anyone in the area. Overall, the reactions have been outstanding. We have had compliments pouring in and even have had offers from people to purchase our costumes because they looked so great in person. I couldn’t bear to part with a costume that I had spent so much work on and was so proud of, but I did teach someone how to make their own and donated my leftover leaves that had gone unused to them. So pick us for the costume contest, because picking anyone else would just be a sin.