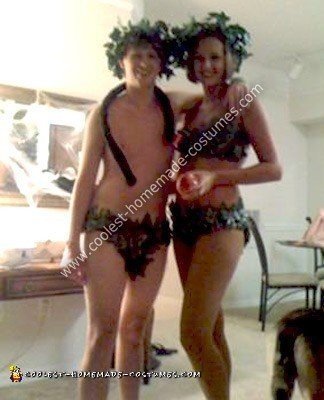 My boyfriend and I decided that we wanted to do a couples’ costume this year. The idea first started off that he wanted to be an Indian. After that I did some research and came up with the idea of a Homemade Adam and Eve Couple Costume (after the fall).

I went to a craft store and bought leaf bunches, like you would use in an arrangement and pulled off all the leaves. I also bought a garland of ivy leaves for the head wreathes. I took gold glitter paint and painted each of the leaves to give them a sparkle.

We took men’s bikini briefs for him and a pair of underwear for the bottoms. I found a bra that snaps in the front and cut the sides off under the armpit. I took clear elastic and sewed it across the back of the bra (Eve didn’t wear leaves on her back). I hand stitched all the leaves onto the garments making sure to cover all the fabric.

For the snake, I brought black knit fabric and sewed it together like a cylinder. I stuffed it with cotton and wire so it would wrap around the arm or neck. I used red felt for the tongue and bear eyes for the eyes.

All in all this Homemade Adam and Eve Couple Costume was a very easy costume to construct but time consuming.