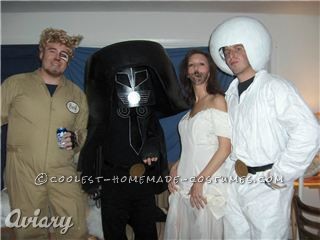 This ultimate Spaceballs group costume was made up of Lord Helmet, Princess Vespa’s stunt double, a Space Ball Trooper, and Barf. We picked characters based who we looked like and what people would recognize. PS princess Vespa did not look like a man but we thought it would be funnier.

Barf had made his costume the year before and it was pretty funny so we played off of it for the following year. His costume was pretty easy.  Just a jump suit and a mullet wig he put ears on. He sewed a tail on his backside and attached the tip by fishing line to his shoulder so it would wag. He also added gloves and face paint.

The Space Ball Trooper used a cheap painters jump suit from Lowes and  beach ball from Walmart. I paper mached the beach ball then popped it and cut my head hole. I spray painted it white and put a towel in there so it would rest on my head. It worked OK.

The crowning achievement by far was Lord Helmet’s costume. Everyone knew who we were when you saw us coming down the street. The helmet was made out of a blue plastic 55 gallon drum a friend gave me. I think you can get them pretty cheap on Craigslist. I cut the shape and cut the face plate out then used a heat gun to bend up the edges. That was a lot of work because I would cut, bend and glue.

I used foam insulation and bondo on the top of the helmet to remove the depression you would normally find on a drum. This was also a lot of work. This made the helmet extra heavy, well over 12 lbs which might not seem like a lot until you have to wear it on your head all night. I bolted a construction hard hat inside the black helmet which worked out well.

For the face mask I cut the eye holes then glued plexi glass into them. I then used window tint to darken them. I used scrap plastic to make a track for the face mask to slide up and down on. It worked so well that when Lord Helmet was at the bar his face mask would randomly fall down just like in the movie!  And we painted the helmet as you see in the pics. Lord Helmet also required costume glasses, a cape, and card board tie and belt buckle. Surprisingly since I had a lot of the stuff for his costume it was not expensive at all to make.

Needless to say we won first place at a local bar’s costume contest. 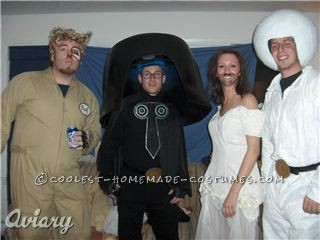