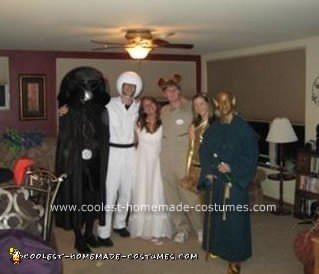 This group Spaceballs Costume was put together by myself and friends. It consists of six characters from the Spaceballs movie created by Mel Brooks that is a spoof of Star Wars and a few other movies. From right to left the characters include Yogurt, Dot Matrix, Barf, Princes Vespa, a Spaceball (aka-Major Asshole), and Lord Helmet.

We are all huge fans of the movie and thought it would be a blast being the characters for a night, which it was. The costumes where pieced together from random items, for the most part. It took about a month of shopping, ordering, and building to get it all.

The helmets where by far the hardest part; especially Lord Helmet’s helmet. The Spaceball characters helmet was made from a decorative outdoor lamp post cover. It was cut to the shape of the helmet and then spray painted white. To fit it to his head we used insulation foam to secure a bicycle helmet inside the globe. Lord Helmet’s helmet was a little trickier. We first took a Booda kitty litter box’s top and cut it to the shape of the helmet. Then we spray painted that black. After that we mounted a face shield helmet into the litter box lid with two bolts and lock nuts. To mount this we had to bend some metal to fit the needed shape and attach both the face shield helmet and litter box lid.

Next came the face shield which I think was the hardest part. We had to again bend more metal to securely mount it in the helmet but also allow room and ability to move open and shut. This was tricky but basically just done with bolts, washers, and lock nuts. We also create the look of the face shield with a drain from a sink for the mouth and for the eyes some car window tint and foam window sealer strips.

The Yogurt character was created using a green robe, gold elf shoes, a gold rope with tassels for the belt, gold makeup, fake hair, elf ears, and of course the Shwartz ring which can’t really be seen in the photo. He also has a mini Yogurt doll like the movie.

The Barf character was made from a khaki pair of coveralls stuffed with pillows, a wig, some mouse ears, a sowed on tail, face paint, and a sowed on name tag.

The Princes Vespa character was made simply by cutting up and modifying an old wedding dress and then doing her hair to match one of the styles in the movie. The Spaceball character just needed white painter’s coveralls, a belt, and the homemade helmet.

The Lord Helmet character needed the homemade helmet, nerd glasses, black tights, black short shorts, black under armor shirt, batman cloves and cape, shoulder pads created from a cut up rain jacket and silver marker, a belt with buckle made from black cloth and cardboard with a printed dime glued to it, and finally a tie made from cardboard, black cloth, and silver marker. O! We can’t forget his Shwartz ring made from two ring pops.

All in all these are the best costumes we’ve made so far and the most fun we’ve had YET!