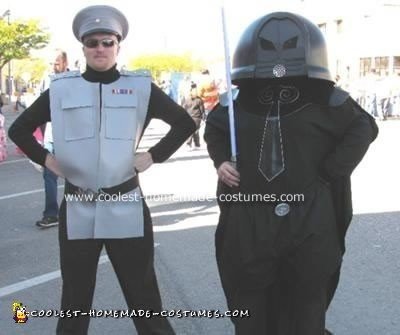 DARK HELMET (AKA my mother!)

Its a cat litter box! No joke. There were some really good ideas for Spaceballs costumes on this site, but we only had 1 day to do this one, it was a last minute idea. We tried to figure ways to make the mask move up and down, but everything we came up with involved something elaborate and expensive, so we gave up on the moving parts. Instead, we bought a litter box! A new litter box, of course. We picked up the BoodaDome litter box for $20 at the pet shop and spray painted it black. The mask portion is cut from cardboard, spray painted with mesh for the eyes, and glued into the litter box door. We lined the inside with thick foam so it would stay on and be comfortable. Note: remove the litter box filter before spray painting or you could get sick from the fumes in the filter!

The rest of the costume is vinyl for the “armor” and “tie”, cheap black satiny fabric for for the cape that we velcroed to the armor part, some nylon jogger pants we hemmed into shorts, black tights and a black shirt we already had, and the belt buckle is a dollar sign necklace we got at the dollar store and painted silver.

My husband decided to do this a few weeks ago, so I had a bit more time to work on it. I tried to find a military hat that was gray, but apparently gray isn’t a color we use here in the US. I bought a damaged white one on eBay for $5 and recovered it with gray knit. It took about 5 minutes of sewing and some hot glue.

The tunic is vinyl pieces attached together with staples, velcro, and hot glue. I made the little military pin out of a fake credit card I got in the mail (I was pre-approved!). I cut it into a strip and glued different ribbons around it, then glued it to the vinyl tunic. I glued some gold buttons I already had to the shoulders and the hat. The clothes we already had, too: a black turtle neck, black pants and a stretch belt.

Not many people know the movie Spaceballs so we got a lot of Darth Vader comments, but the people who did know it loved it and we got some good laughs. Next year we might add Dot Matrix, Vespa and Barf to complete our group. We don’t usually repeat costumes, but this was too fun! 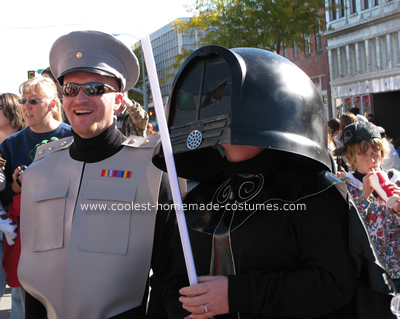