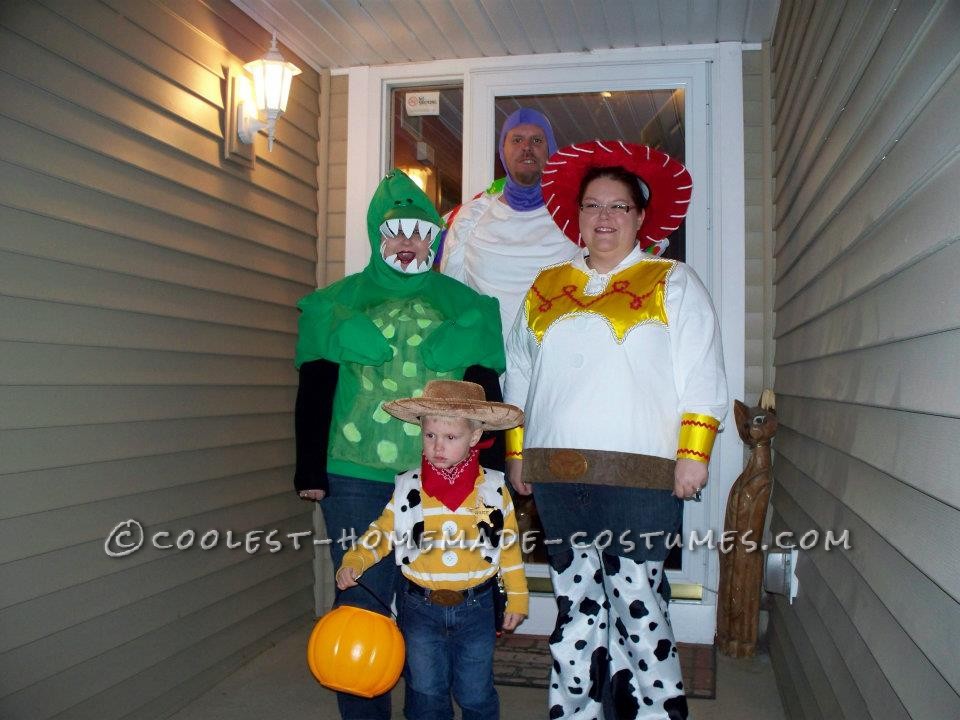 My son wanted to be Woody for Halloween. And as a 3 yr old, he wanted all of us to dress up with him. I was assigned Jessie, Daddy was Buzz Lightyear, and Aunt Shannon was Rex the dinosaur.

Shannon made her Rex costume from a large green sweatshirt, foam visors and foam teeth with googly eyes for his face, and fabric paint (some glow-in-the-dark) for the body. Her “short arms” were made with paper towel rolls, she cut slits for her real arms under the Dino arms, wearing all black to hide them.

I made Jessie’s chaps and Woody’s vest from cow fabric. For Woody, I embellished a store-bought shirt with large buttons and the bandana, and hand painted his (pin-on) belt buckle and sheriff star. The Woody hat was a gift from his grandmother. We got a small holster and pistol set from the Dollar Store. For Jessie, I found yellow prom fabric on clearance at the local fabric store. I glued the yellow satin on the top, using hot glue to trim the yellow in white rope (since you could see the fabric glue through the satin (that was almost horrifying).

After that dried, I went in with red Rick-Rack and made the red “stitching.” Because I wasn’t going to tuck in the shirt, I used fake leather fabric and made a belt at the bottom of the shirt, adding the hand painted belt buckle pin. For Jessie’s cuffs, I used 16 oz Solo cups. I cut the bottoms out, then covered them in the yellow satin. I added more red Rick-Rack for decoration, and tied them on with white yarn. The cups helped the cuffs to flare. For Jessie’s hat, I bought a red “Pimp Hat” from the party store. I removed the feathers and sewed the slant down on the top to make an even cowgirl hat. I punched holes in the material and wove white yarn around the edge. I sewed the chaps onto a pair of old jeans and used Velcro to even it out.

My husband wasn’t sure he wanted to dress up or even be able to join us because of work so his Buzz Lightyear costume is from Target. And honestly, we ran out of time. It took weeks to pull these together. Who knew that a red cowgirl hat would be so hard to find? Thank goodness for the Pimps.

My favorite part of Woody is the cow vest, and of Jessie it’s the solo cup cuffs. I love Rex’s face and short arms.

I won first prize at work for Jessie, and our little Woody got lots of extra candy for bringing the whole crew with him.