My boyfriend looks like Woody so I wanted us to be Woody and Jessie Couple Costume from Toy Story 2. I looked and looked but couldn’t find any costumes that fit well enough or were to my liking so I decided to make ours.

For Woody: For the Vest I bought a vest that I found at a thrift store and bought the felt cow print fabric from a craft store. It took a little while to cut and cover the vest with the fabric, especially since I used a hot glue gun to attach the cow fabric to the vest. I didn’t have a sewing machine. I even covered the inside of the vest with black fabric in case he took it off so you wouldn’t see the ugly maroon color the original vest was. He wore jeans and a belt he already had. I found the yellow shirt at Dillard’s on clearance for 7 dollars. I bought the hat at a Halloween store and glued on the sheriff’s star from a kit I also found there.

For Jessie: For the chaps I used a pair of jeans I didn’t wear anymore. I cut out the front and back but left the waist band and the button so I would have a way to keep them on. I cut the jeans up the insides of both legs.

I laid the same cow print fabric that I made Woody’s vest from over the jeans, cut it accordingly and hot glue it to the jeans. This sounds much easier than it actually was. Haha. I cut a few holes on the inside legs of the chaps and took some small metal fashion eyelets, and glued them down. I then took some leather string and tied the leg pieces together through the metal eyelets. I took some black fringe I bought at the craft store and glued it around the waist of the chaps and some down the sides. I wore black boy shorts under the chaps. For the shirt I used a yellow tank top I already had and cut off the bottom.

For the over shirt I also used a white button up shirt I had, hot glued some red ribbon on the edge of the sleeves, attached a sheriff’s star from the same kit as I used for Woody’s and tied the shirt. I wore cowboy boots I already had. I borrowed the hat from a friend’s daughter.
I also bought western toy guns for both costumes.

This was a lot of fun and we got a lot of compliments on Halloween. Thanks for looking. 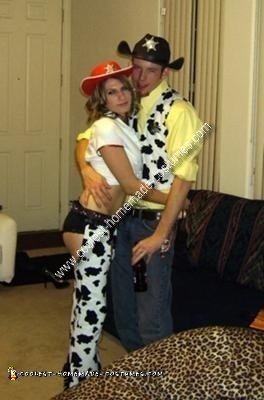 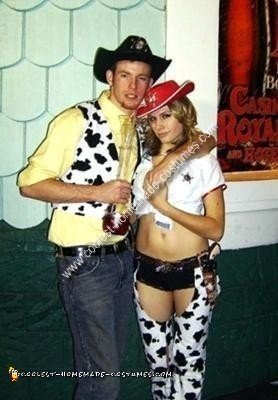 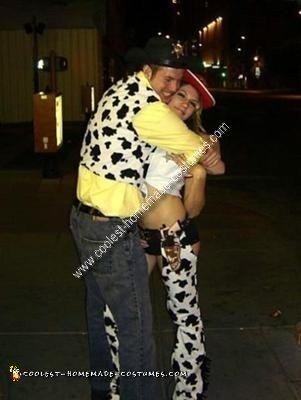