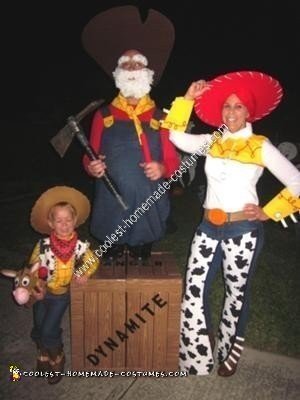 This is how we made these Homemade Toy Story 2 Woody’s Round Up Gang Costumes. For Woody’s shirt and Stinky Pete the Prospector neckershief, I bought bright yellow material and added the checkered board pattern with red fabric pen. I bought denim material for Woody’s pants and Stinky Pete’s Overall and made my own pattern. For Stinky Pete’s overalls buckles, I got posterboard and cut two different shapes and glued yellow felt to it and then glued it to the overalls.

For his red shirt is just a red long sleeve shirt from Old Navy one size smaller. I used yarn for Stinky Pete’s beard and eyebrows and felt for Jessie’s eyebrows and attached it with spirit gum. To make Stinky Pete look plump, I bought a Santa’s belly and used one of my son’s baby pillows for his chest.

As for his hat, I studied the movie and made my own template with a box and glued craft fuse and brown material to it. I also did the same with Jessie’s (me) hat but used felt and an awl to punch the holes through so I can use the cording to lace it on. For Jessie’s wig, I got red yarn and sewed it to a red material (which I made like a cap) and braided it then I made a yellow bow and attached it at the end.

Jessie’s white shirt, I bought from New York and Company but I sowed the same yellow material as mentioned above on the top and the cuffs (to make them stand, I ironed craft fuse to them) and then I glued red cording to the same pattern as the movie on the material. I then attached the white trims and added giant buttons painted silver on the edges. For her jeans, they are store bought but I glued the cowprint material (which I ironed craft fuse to make it stand up) and added the white trim to the ends. The belt is all hand made from the same material as bullseye and added craft fuse to make it sturdy and used the buckle from one of my son’s pretend Toy Story belt.

I used brown boots and Woody’s we gave boots and even added the spurs. Bulleyes was made with material and felt and attached to a stick. The best part was to make Stinky Pete look small (mind you my husband is 6’2″). I used boxes and made my own dimensions to make two separate boxes. I then cut out two holes to fit my husband thighs and used contact paper with a wood grain pattern and adhered it to the box. I drew some lines to make it to look like a crate and then I added the lettering. Afterward I got some children old funny looking boots and disected them into two part…just the tip and the back. I attached it to the box and added black material that slips like a boot on my husband…VOILA you have the illusion that he is short.

My husband later glued and screwed on his shoes in the inside bottom of the box enabling him to be able to walk with them. Now you see Homemade Toy Story 2 Woody’s Round Up Gang Costumes. 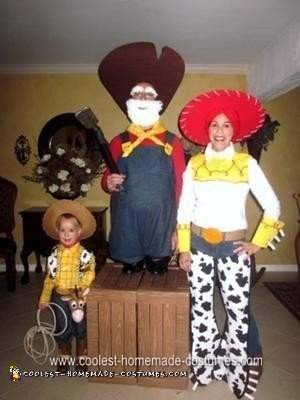 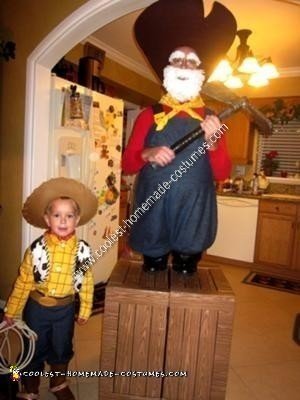 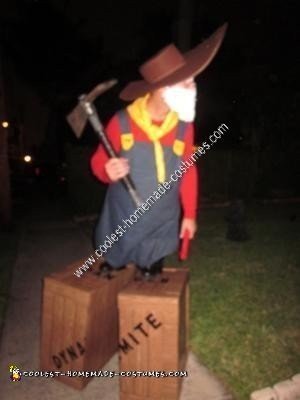