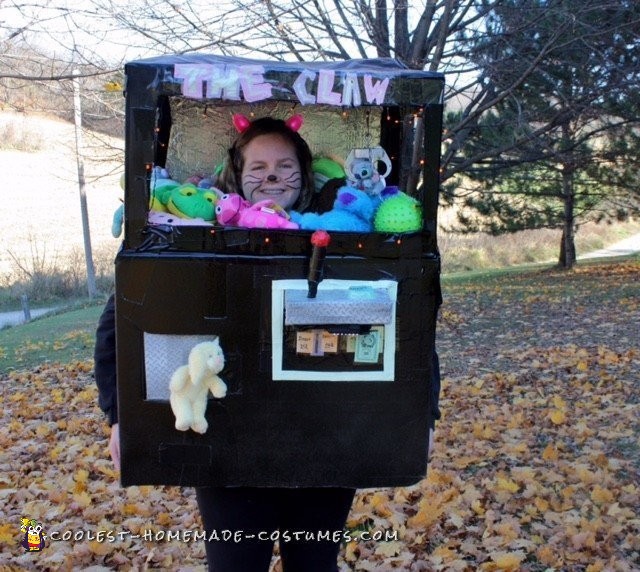 I had the idea to make this costume because wherever I go with my family, I love playing the claw machine games that they have at stores or restaurants. I wanted to make a claw costume where I was one of the stuffed animals in the machine. After the idea, I got to work. First, I needed a box. My mom and I went to a TV and appliance place where they would have big boxes to make my costume out of. The nice man there even went in the dumpster for us to get some stove boxes out! We picked up the two boxes, then went home.

Right away I started cutting the box to the right size I wanted it to be. I cut out three windows and arm holes out of one box, then attached it to the other box using lots and lots of duct tape. Then I cut out a hole for the head and a hole for a prize return. After about three rolls of duct tape, I was finally done attaching the box so that now it was one box.

The next night I spray painted the box black. Then I arranged a bunch of stuffed animals inside. I had so many stuffed animals in my room that I didn’t know which ones to put in the costume! Even though I arranged the stuffed animals, I had to take them out because there was still a lot of work to be done to the costume. The next thing that I did was put aluminum foil in the back to look like a mirror. This was the hardest part because the aluminum foil took a really long time to smooth out. When my parents and I were shopping, we found some lights to put in the costume to brighten it up. We also found some cat ears that lit up pink for me to wear when I went trick-or-treating. I attached the lights to the costume and put the words “the claw” on the front of the costume using duct tape.

After all this work I still didn’t have the actual claw yet, so my dad and I started looking at what to use to make it. We found some clamps, and he cut them to look like the claw that picked up the stuffed animals. Then I started working on making a joystick and a start button. I used a box that I found to put the buttons on. I used a lint roller and a bouncy ball for the joystick, and for the start button I used a cap for something that I found in our junk drawer. This was the most fun part of creating the costume and also the easiest becase I had to look around the house for stuff to use, and putting it on the costume was really fun. I even made the joystick able to move around! Then I made the box look like diamond-plated silver using duct tape and paint. I also made a coin slot and a dollar bill slot using another box, and where the dollar bill slot was I used a piece of monopoly money. Then I attached another light to brighten up the coin and billl slot.

I attached a garbage bag to the top of the costume, and my dad added dowels to support the garbage bag and some lights. After that I made a few touch-ups and added a stuffed animal to the prize return. I also added pillows for my shoulders and adjusted the arm holes. I put some glow-in-the-dark tape around the lettters and edges. Then finally after all that work, I was finished! It was time to go trick-or-treating.

For halloween we took my nephew, Sam, and my neice, Lily trick-or-treating. Right away we started racking up candy like crazy. I got a compliment on my costume from each and every house I went to trick-or-treat at. A few people said that it was the best costume by far that they have seen. Others told all of their friends to come to the door and see the costume. I heard some little kids say, “Look!”, “She’s a claw game!” Some people even gave me extra candy! My nephew was so jealous.

With my costume being so big, I couldn’t reach my left arm with my right, or my right arm with my left. This made it difficult to pick up both handles on my bag of candy if one of them fell down. At least my dad and my nephew were nice enough to put the straps back in my hand! We were all laughing because it was funny to see me desperately try to pick the straps back up.  After a while, though, my costume was starting to get heavy. I was wondering why it was so heavy, because it wasn’t heavy to begin with. Then I took a look at my candy bag and it was almost full, and that was making the costume heavy. I didn’t think that I had so much candy! We stayed out a little while longer then we went home. I ended up having a lot of candy, and I had a great time.