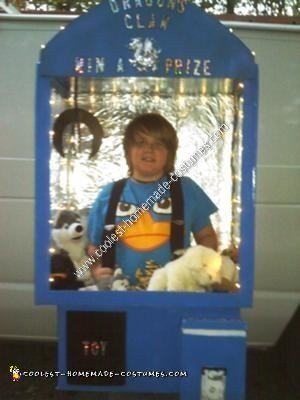 After seeing some pictures of kids who crawled inside of claw machines, my son chose a homemade kid in a claw machine Halloween costume idea. I started by bringing several boxes home from work. We taped two large boxes together and a third small box for the “candy” money. I then cut out the claw machine windows leaving the back of the box solid. Then we spray painted the entire thing the main color.

We then got some battery powered Christmas lights and hot glued them in place. For the back of the claw machine we glued aluminum foil on the back for a mirrored effect. I got a clear shower curtain and glued to the sides but decided to leave the front open.

The controls for the claw were the button style which we made with cardboard. The controls were arrows that pointed left, right, up, down. We put the controls on the lid of the money box but left it able to open. He wanted to be able to put “candy” money inside. We made a claw out of cardboard, painted it and hot glued it to a wooden dowel. Then we cut holes in the back and bottom of the box for the suspenders. We anchored the suspenders in place with wooden dowels and took the metal hooks off, this also prevented the box from ripping.

Then we added the stuffed animals. He put on his Perry shirt because he thought that a little kid might also wear that. I must say that the shirt helped complete the costume.

We were very pleased with how this homemade kid in a claw machine Halloween costume idea turned out! He was the celebrity of the neighborhood. The thing I would do different next time is to add fake legs, Indian style – I thought that would make it look more like a kid sitting in the box. 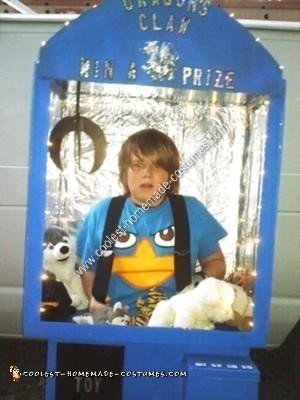 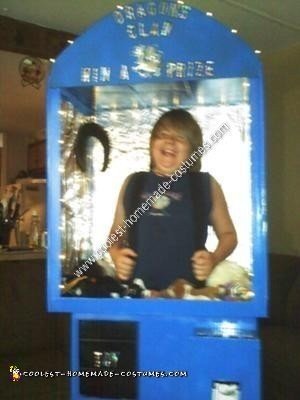 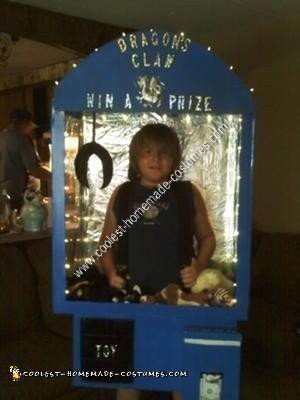