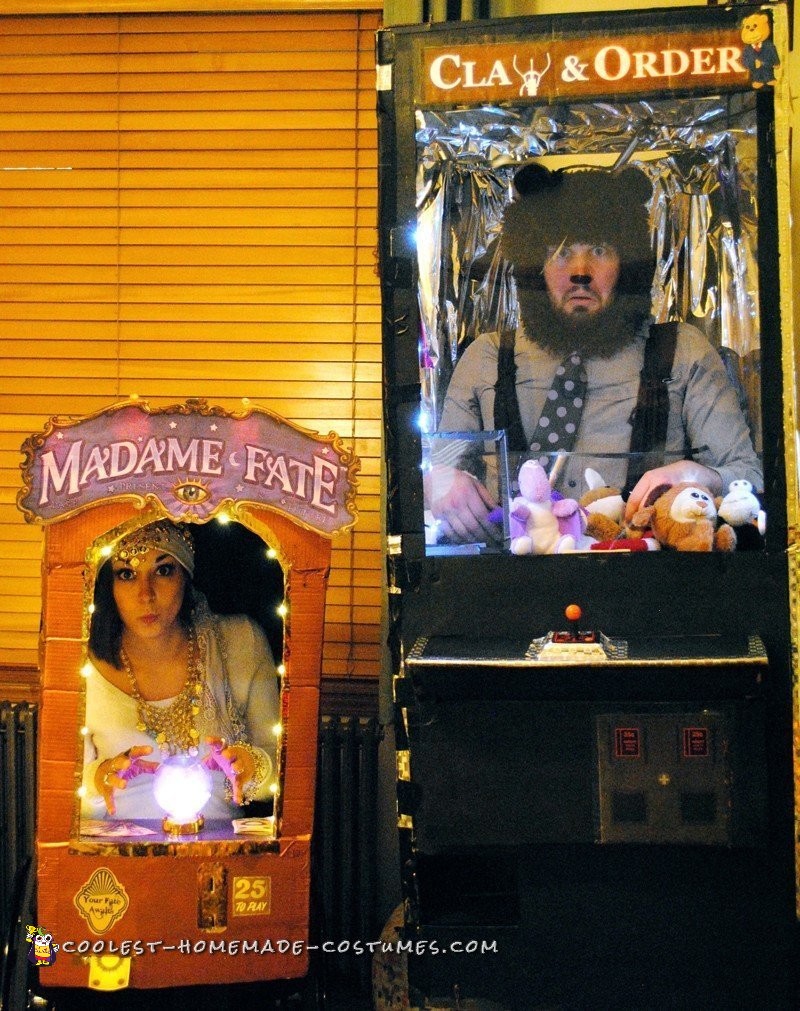 We went to my sister’s house on Halloween night, where the street gets hundreds of Trick or Treaters, all the neighbors are out on their porches blasting Halloween music, it’s the kind of crowded, festive streets you see in the movies.

We had a constant line for hours of children and teenagers (and a few adults) who wanted to play the claw machine. Most of them thought it was a real working claw machine since he created the pulley system to raise and drop the claw.  He let the kids “play” by asking which toy they were going for, guiding the claw to the toy, squeezing the claw and pulling the string to raise.

Most of them did not win a toy (we only had so many stuffed toys), but he still threw candy down the shoot for the kids so everyone was a winner.  He chose who won a toy based on best costumes or their genuine excitement to play.  The very first winner was this tiny little boy whose face lit up with excitement when he won a stuffed toy and he ran around the front yard screaming,  That was the moment we knew we’d never top this interactive arcade game couples costume. Every time there was a winner, the crowd would clap and cheer.

Next to the claw machine, I gave out fortunes with candy through the slot at the bottom of my fortune teller booth.  The kids loved it, I had fun fortunes about Halloween or silly jokes. Even better, I gave out “adult” fortunes of funny or raunchy sayings to the older folks who were all so amused.  Some of the kids thought they had to pay a quarter to play our games and were ecstatic to realize they were free, which was pretty cute.  I think they were all excited to have these fun attractions to add to their Trick or Treating experience. Everyone kept saying we were the best house on the street and took tons of photos of both our costumes. We had so much fun. 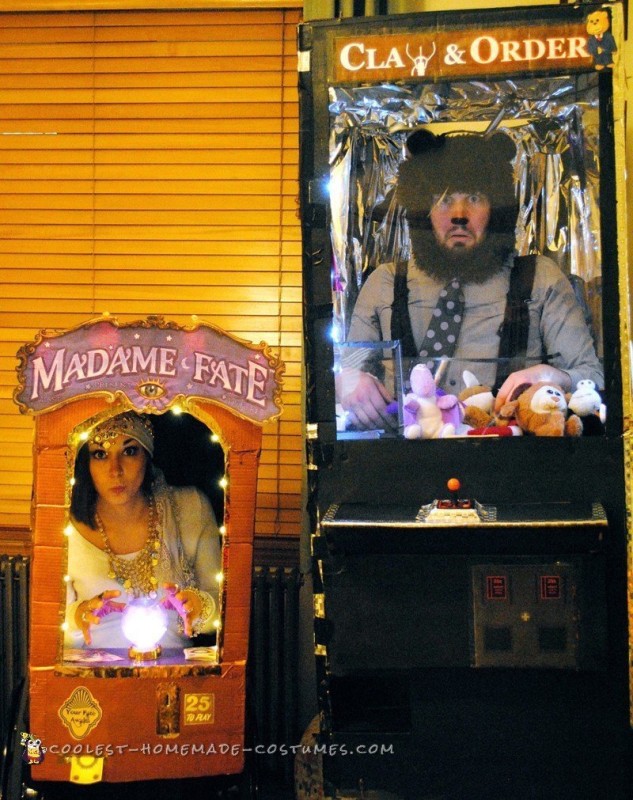 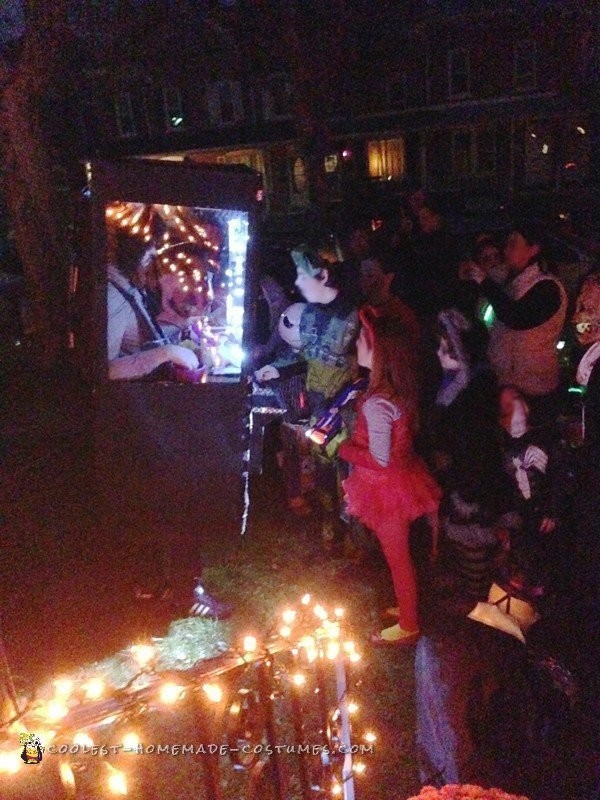 Cardboard and lots and lots of duct tape!  We each started with a big cardboard box and taped on more cardboard to get the correct shape, size and details. We sliced out the windows on 3 sides, spray painted, then began detailing.  We printed out the game title signs, 25 cent signs, tarot cards, etc and glued them to the finished structures.

We used dollar store gold and silver duct tape to line the edges of the boxes and windows and other small details.  The claw machine windows were plexiglass attached by velcro.  Since I actually wanted to be able to breathe, instead of windows I grabbed some old black sheer fabric and stitched it into the box for curtains in the 2 side windows. We each taped a strand of battery powered LED lights to the inside of the box around the front windows’ edges to feel more like an arcade.

The crystal ball was incredibly cheap and easy to make.  I pulled some spider web decoration as thin as possible, then carefully pushed it into a large, clear Christmas ball to create the illusion of smoke. I covered a large color-changing tea light with the gold tape and glued the web-filled ball on top.  My fortune teller costume was simple:  I wore one of my fancy scarfs on my head, a long lacy skirt, gold costume jewelry, a whole bunch of my own rings, and a gold headpiece found on Amazon. 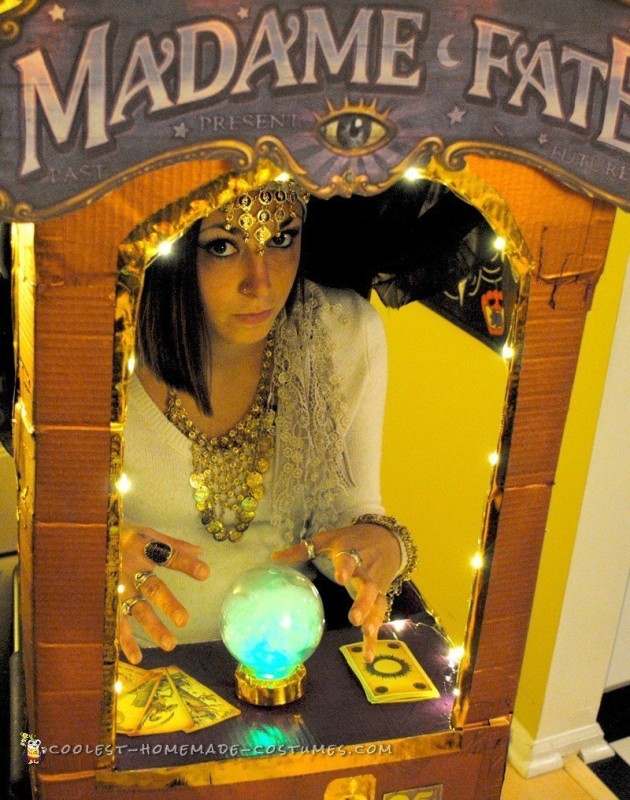 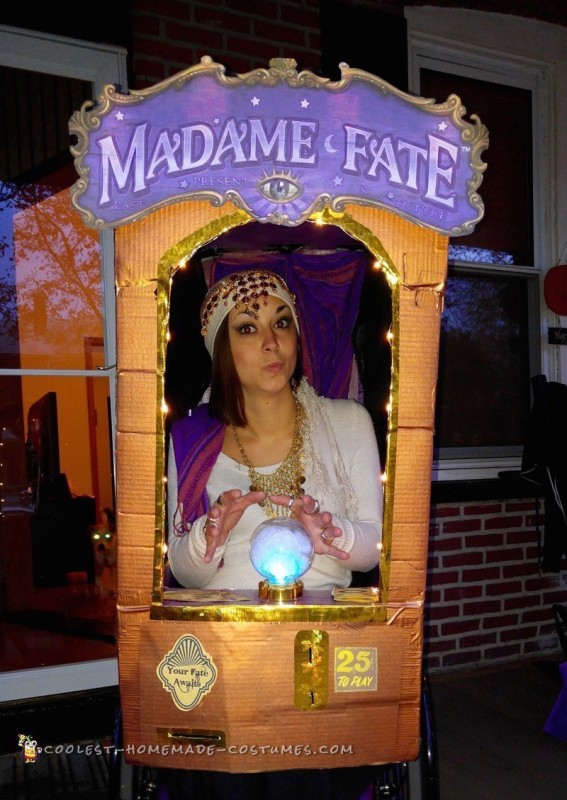 While my fortune booth sat directly on my wheelchair, the claw machine required a harness, which he made with fabric straps attached to a wooden support bar in the middle of the box. He made the claw by cutting up and duct taping a whisk, then attached it to string and created a pulley system so he could manually pull it up and down. The joystick was an old Atari joystick from my childhood.  He covered a thin piece of wood with black fabric to set as the “bottom” of the game lined with more plexiglass where he placed a whole bunch of dollar store stuffed animals.

My mom made a lion costume for me years ago but the head looked like a bear, so we thought it was the perfect stuffed toy bear costume.  Bear head with a suit surrounded by stuffed animals and Claw & Order was complete! 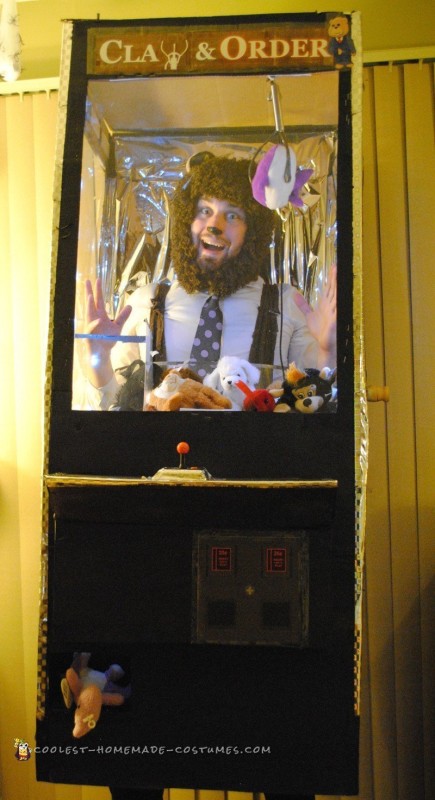 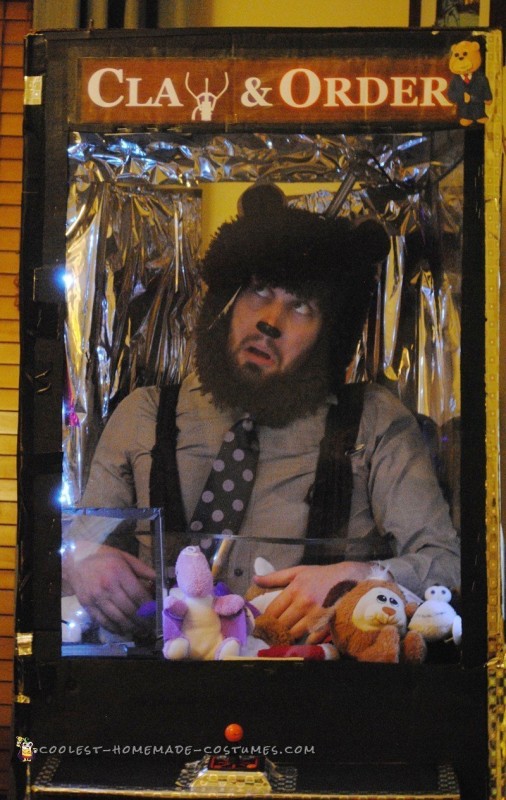 Don’t forget about transporting during your process!

We had a great time making our interactive arcade game couples costume, but when it came time to transport them we knew they’d never fit in our tiny car.  My fortune booth fit in the back seat with the seats down but the claw machine had to be completely cut apart.  His heart and spirits were crushed as he sliced through the sides of his perfectly crafted claw machine, but I kept assuring him duct tape fixes all!

We got to our destination and he spent about 20 minutes putting it back together.  It all worked out and everyone loved it.  He had to do this 2 more times for our many Halloween adventures.  We don’t know how we’ll beat the interactive experience we had with the kids, but we’re already brainstorming for next year!