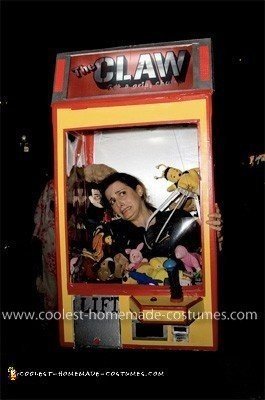 For this Claw Arcade game costume, I put myself inside the game as one of the “stuffed animals.” I built the arcade box with foam core, using clear plastic film to reproduce the glass (the front one didn’t close completely so I could talk/breathe comfortably without claustrophobia setting in).

After having slowly collected a slew of small stuffed animals for weeks prior to Halloween, I attached most of them to the back wall and floor of the box with zip ties so they didn’t move all over the place – leaving a few loose to keep it realistic. I rigged two “overall style” straps I installed inside the box – they were like suspenders in the front, and crisscrossed in the back – I used very long belts that were soft/cloth for this).

In order to put the Claw Arcade Game Costume on, it had to be slipped on over my head, where I would reach my arms up into the oval hole opening and through the shoulder straps.

I constructed a wooden “Claw” looking mechanism and spray painted it silver/chrome – then I rigged it to a string from the top that went through a tube I ran discretely in the corner of the box, hidden from view.

On the other end of the tube, the string had a loop I could smoothly pull, out of sight of the “audience,” to make the Claw go up and down whenever people touched the fake joystick and buttons in the front of the “game.” (those were also made out of spare plastic parts, including a flexible washer hose for the joystick movement).

Part of what made the Claw Arcade Game Costume look so genuine was the illuminated sign I made that sat on top of the game. I named the game “The Claw,”, and printed a fake logo for the game on clear laminate paper – affixed into an angled shadow box and backlit, it truly made it look like a read professional arcade game.

Some of my construction can be seen in this short documentary my friend made: 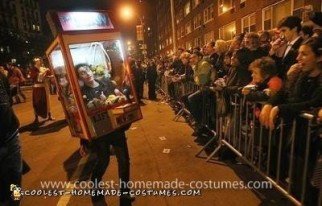 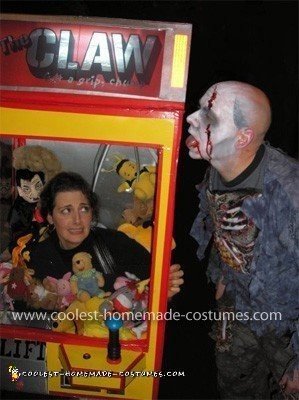