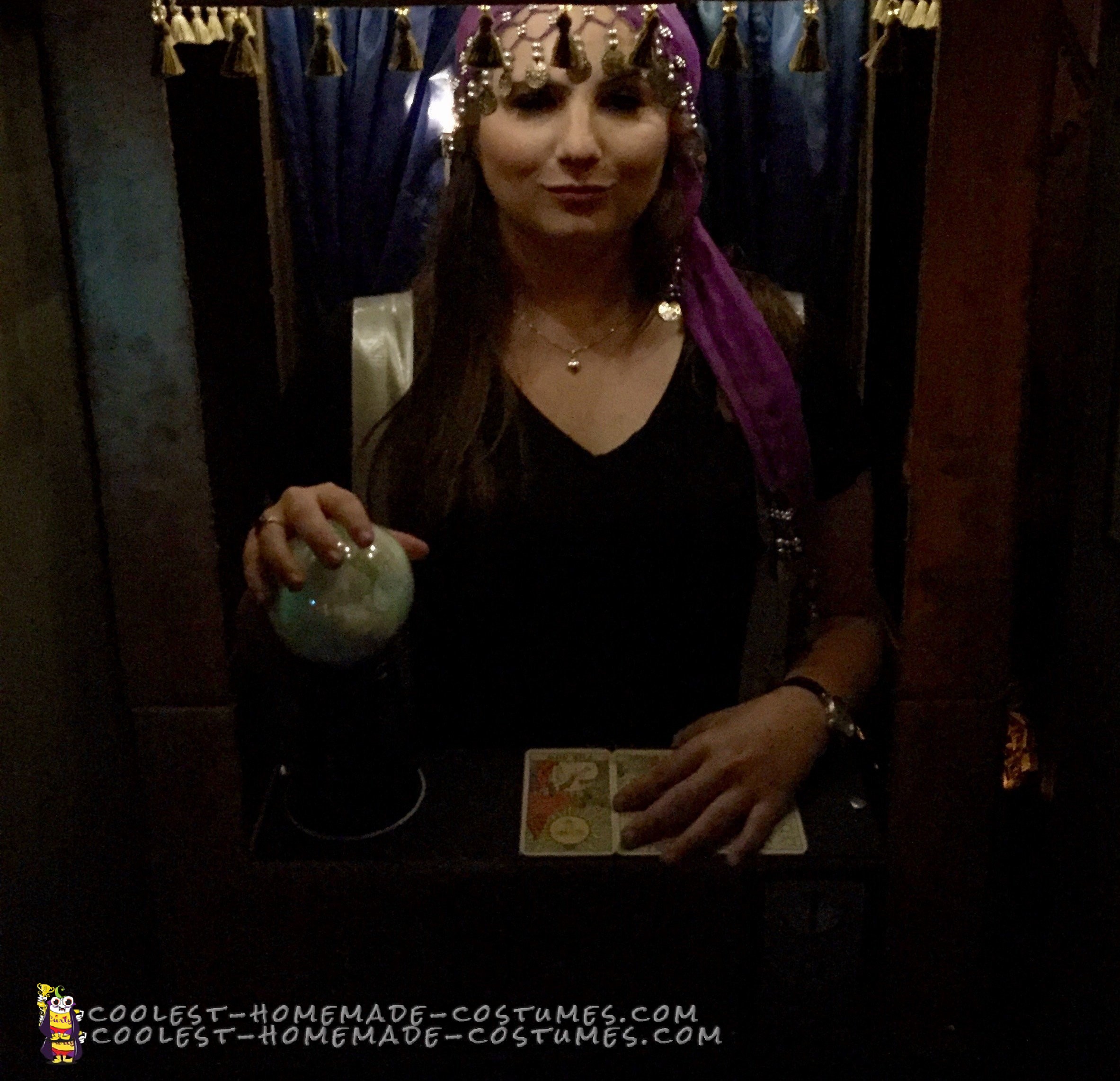 This costume was super fun to wear, but challenging to make! It wouldn’t be that hard now, having gone through the process once, but being the all knowing 24 year olds we are, we felt that we would be perfectly fine waiting until the last minute, and that all we needed was duct tape, a box, fabric, and a bottle of spray paint. Although that is the basics, we needed a lot more to make it really come together.

The first thing after taping up one end, was cut the box with box cutter. We just made the box so that we could have reasonable room inside, while still being able to have room at the top to put the signs. We precisely measured to make sure that all three sides were the same size. The only special difference for the front was that rather then cutting it all the way out, half way down we kept it to fold over, and that became the shelf to keep the tarot cards and crystal ball.

Next we spray painted. At first we thought that we could just cover the box with 1 can of gold paint. Wrong! The brown box was covered in Home Depot logos that showing through. Ultimately the entire box had to primed with a white primer, before 3 coats of gold spay paint was applied.

Then we started with the duct tape, by folding over the tray which ultimately doubled as a support for the entire costume. We also taped a black poster board to the back of the box to give it the illusion that there was a dark room in the back!

Next we worked on the curtains. The fabric that we bought was actually a satin sheet that we purchase (and ultimately washed) from the Salvation Army. The shiny, slinky material really gave it a rich feel, that one might find in a fortune teller’s room. We are awful at sewing, and at this point were stressed and wished we had our moms’ sewing knowledge, but in the end we used stitch witchery to basically do the same thing. So we cut the length we wanted the two panels to be,  ironed the whole thing to get the wrinkles out, then folded about 2 inches over to make ultimately make a loop with the help of the witch stitchery.

For the curtain rod we were going to use an actual curtain rod, however in the interest of keeping the weight down, we used a wooden dowel rod. We cut two small holes in either side of the (box in the top rear), put the rod with the fabric on it through the holes and glue gunned off the ends to keep it in place. While the glue gun was out, we also glue gunned the fancy trim to the top of the 3 openings.

Once the curtains were in, we put the candle sconces in. We attached them to the box using clear packaging tape, spaced to that they would just make the curtains swag ever so slightly.

The lights on the top of the box really gave it the arcade feel and we just used a small strand of battery powered LED lights purchased at Target. We used both electrical and packaging tape to adhere them to the top of the box, and put the battery pack behind the front right post so that we could easily turn the lights on and off.

The coin slot and tarot cards we simply taped print outs from online, while the Esmeralda sign was mod podged onto a scrap piece of cardboard and then added to the box with brass brads that made the box look more like a machine. It was not put directly on the box because there was another name underneath (keep reading!)

To make the straps, we just used duct tape folded over to get a strong and thick strap. We first tried to just tape the straps to the box, but ultimately had to also use a few brads to keep them attached to the box.

To add the curtain to the bottom, we used Velcro strips to lightly attach the measured satin fabric to the box. We only wanted the fabric to go to approximately our knees, as we were going to a party that required us to climb many stairs and we didn’t want to wipe out!

Last, to create the crystal ball, we used a plastic holiday ornament and stuffed spider webbing into it. Then we also stuffed a few glow sticks inside to give it the eerie glow. We cut the top of a black solo cup to fit the end of the Christmas ornament into and then to keep it all together, we used packing taped to tape it into the cup. To adhere it to the box, you guessed it, more packing tape!

Now as I hinted before, it actually is a costume for two! Although I was Esmeralda fortune teller, my boyfriend was the far more famous Zoltar. The sign on the front that I mentioned earlier could be removed so that we both would have our names on the front. We loved the idea of the arcade game, but we knew that the party we were going to, with 7 stories to climb and thousands of people, would be difficult to navigate with two of us in boxes. So we took turns, and in the end, it ultimately allowed us to have bathroom breaks!

The best part of it all though, was the reactions we received once we arrived at the party. The other party goers really got into our costume and we had a constant flow of people in line to have their fortunes told and pictures taken! We loved that everybody got to into it and wanted to interact with character and costume we created! We expected this a little, and even printed out little fortune cards like the actual machines spit out, but we were out in the first 30 minutes!

It was so amazing and so fun to meet so many people who enjoyed our costume and really allowed us to truly be the characters for the evening. I believe this is what makes this costume special. Everybody, young old, wearer and on-looker, can all have fun with this costume. Adults had nostalgia about visiting arcades as kids, and kids had fun getting their fortunes told by an arcade game come to life. And we had an absolute blast telling funny fortunes all night. Not bad for a random idea I got when watching an American Pickers episode on a coin-op arcade! 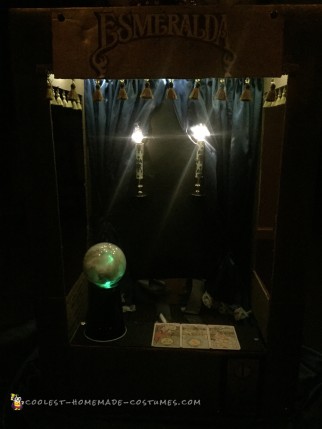 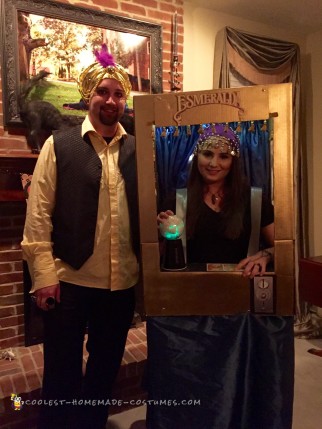 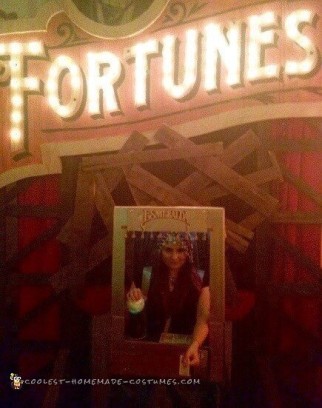