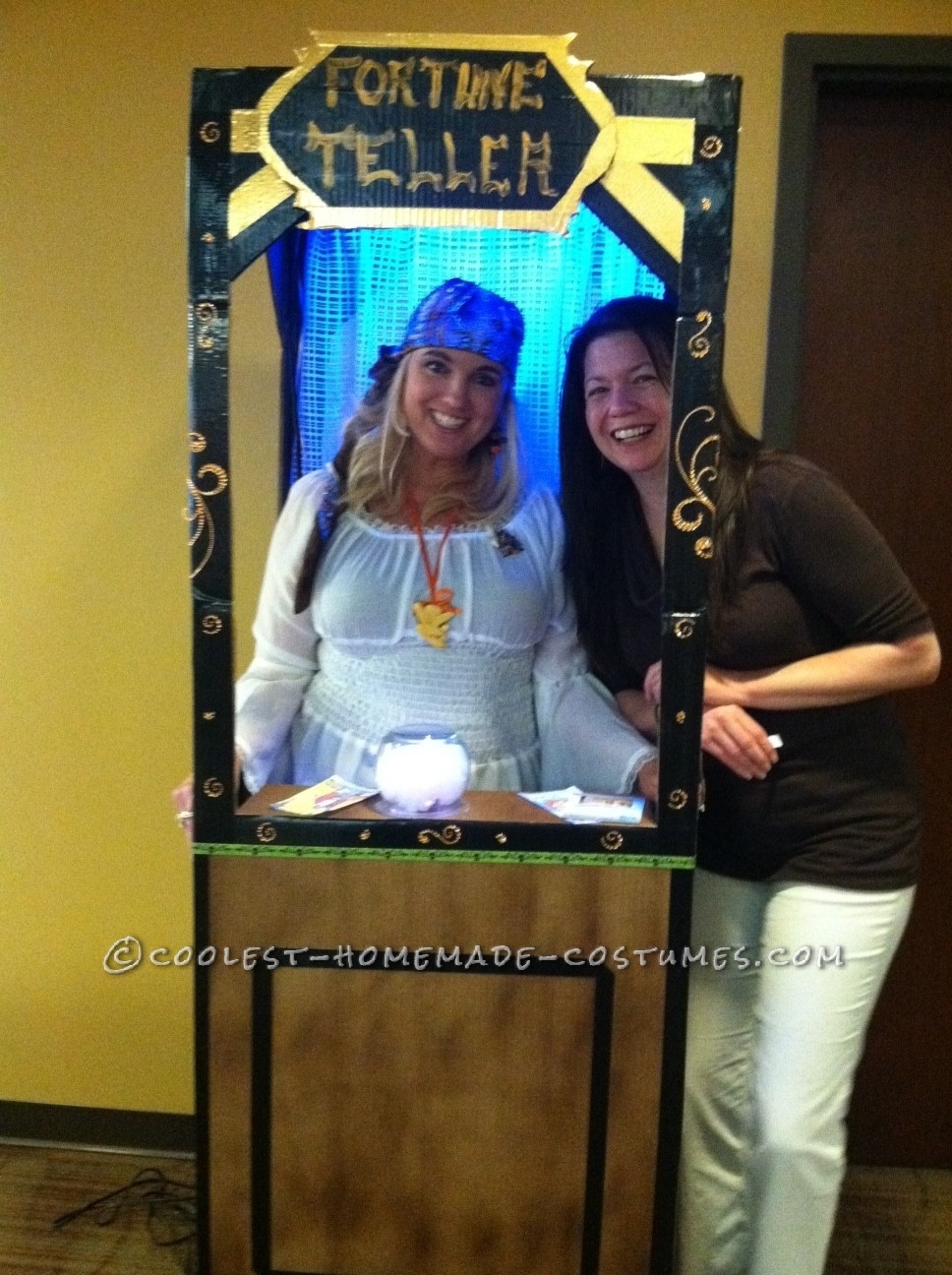 To really appreciate this Homemade Fortune Teller in Booth Costume and the Adventure it was outside of it being an AWESOME  costume, you first have to know that my wonderful loving husband repeatedly assured me there was no way I could make “all that crap ” into a costume.

Okay, so I admit at first glance my gigantic wardrobe box that clearly stated UHAUL on every side, Rolls of Gold and Black “Duck ” tape, precision (not really) box cutter, couple a cans of brown spray paint, and Goodwill skirt, piece of old white curtain, bottle of gold craft paint, strip of green/black felt stickers, might have caused some doubt.  But I had a mental picture of what I wanted or at least what I ‘d accept.

First thing I did was take the wardrobe box out back cut it down one side and flip it so the UHAUL was inside.  Then worked on spray painting it to make the box appear less cardboard and more wood.  It didn’t really look like the paint was heavy enough to do any good at first, but after it dried I was lucky enough to have accidentally created what appeared to be a grainy look.

Next I worked on my Booth Design. I needed a nice big work space with lots of room to spread out so I covered my husbands pool table with plastic and thick cardboard and layed out my gigantic wardrobe box so that i could draw out my booth cut outs.

Over the next week I proceeded to cut, tape, cuss and paint (not necessarily in that order) every side of the Booth. I ‘m 5 ‘8, and my plan was to be able to stand in the booth, BUT I wanted to put a black light in it to give a good glow effect so I needed the top, in order to achieve the height,  I had to ask my “loving and supportive ” husband to assist me while a taped additional bottom panels all the way around the bottom.  Yep, you guessed it, he helped me, but that DID NOT earn me a vote of confidence.

At any rate, I continued on, using the hanging rod from the box to hang the white curtain in the back to cover my door and provide a cool glowing backdrop, I wore a white pirate blouse from a local costume shop and found a GREAT scarf for my head  that glowed in places too.  Some little extras that really set things off were a Dollar store candle holder  that I stuffed with fiberfill and a battery light up flicker candle for my crystal ball.  I also printed off some tarot cards and taped them to the inside of the booth and on the ledge, along with an envelope of preprinted fortunes (found online)  that I would hand out to people that approached.

Now it ‘s done and my husband is AMAZED.  Can ‘t believe it, sure it will win even. HA!  I just have to get it to the office.

It was light weight, but bulky and difficult to transport.  I was sure if it didn’t blow out of the back of the truck on the interstate  (I pulled over twice, had it weighed down with bircko blocks and covered with blankets then tied), that it was going to rip apart!  I made it, but it ‘s a little bent up, so I had to do some extra taping, but none in my office knows that and they LOVE it.

People are stopping me and wanting pictures!  I ‘m feeling pretty good about it and planning to enter the Corporate costume contest at lunch time.  I just have to get back out to the truck and keep it together for the drive!

I make it to Corporate all in one piece, again a little beatup, my mcgiver tape does the trick to reinforce it.  I stick the booth against the wall near a plug for my lite and wait for “go time “.  Finally it ‘s time to put on a show so I turn on my light and step in my booth and assume the hands over the crystal ball position and invite strangers to “step rye up an le ‘ me tell yer fortune “…

I tied for first with Puss n Boots.  See attached

But gosh it was great fun, until I got home and started cleaning up and discovered underneath the two layers of cardboard, and one layer of plastic covering my husband’s BELOVED pool table. I have in my enthusiastic, accidentally, pressed too hard a couple of times while making my booth cutouts and now have TWO one inch cuts in the felt on the recently RE-felted pool table!!!

OMG!  Yeah, NO WAY I AM ADMITTING THIS!!  I ‘ll tell you now, I fixed it.  Completely without his knowledge.  Six months later he notices the cuts in the cover and had a freaking fit.  Fortunately for me by then he ‘d been storing boxes on it, so “I did ‘t do it ”

Cost of Homemade Fortune Tellers Both 70.00
Cost of Gypsy Costume 45.00
Prize for winning 1st place in workplace costume contest 25.00
Cost of repairing (without him knowing) your husband’s POOL TABLE that you stupidly used as a work space (stupid stupid stupid)  – PRICELESS 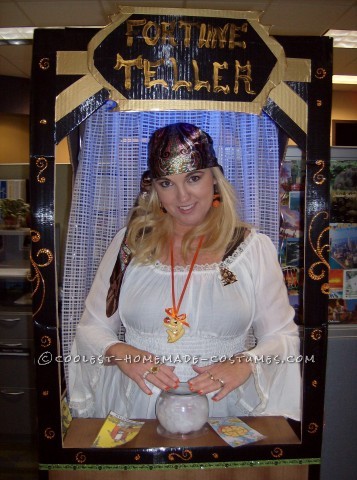 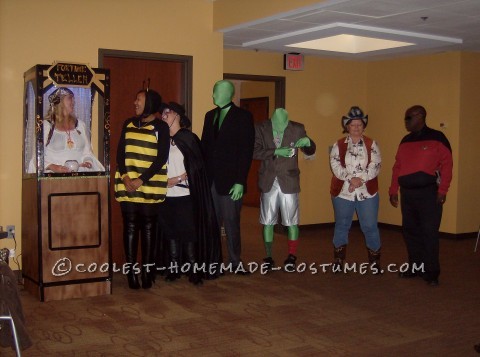 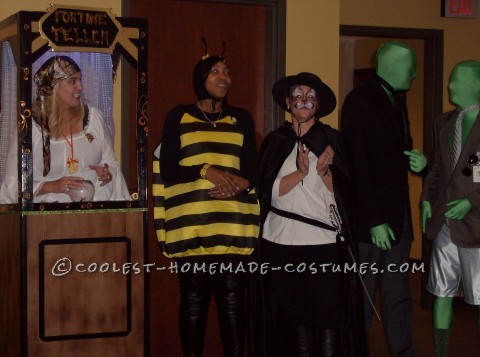