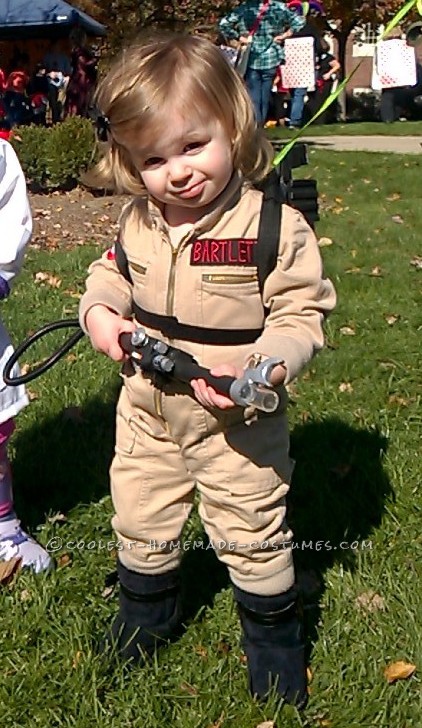 I was born in 1986, the year the animated series “The Real Ghostbusters” premiered, so to say I’ve been a lifelong fan of Ghostbusters would be quite accurate. Last year when my daughter, Jennifer, was born in January, I told friends and family I’m pretty sure I get to pick her first two Halloween costumes, then after that, she will probably have an opinion on that subject. After making her a custom Samus Aran costume last year out of foam hats and foam sheets, I determined I had better go all out this year on a cool Ghostbusters costume for her.

My best friend had purchased a toddler sized proton pack that he intended to give to her, but it was not what he was lead to believe it was. We determined to make it that way though, so we took the shoddy base and hollowed it out to remove some weight, added a lot of pieces to make it more accurate to the films, created proportionate labels and applied them, smoothed out rough edges, added a foam back for comfort and straps, and as a final touch, added animated lights to bring the whole thing to life. It ended up being pretty incredible.

Unbeknownst to me, my friend also made her a little PKE meter that she could clip to her belt when not in use. She loved it though and carried it almost all the time while dressed up. It also lit up with a display screen that changed colors over time and a while light that blinks when (supposedly) ghosts are around according to my friend. He never did tell me how it worked haha.

At one event her mother and I took her to, I made her a Slimer balloon (drew features in Adobe Illustrator, printed them out, then taped them on to the balloon) that we tied to her proton pack, check it out:

I purchased a boys’ 12m Air Force flight suit off eBay for her Ghostbuster jumpsuit. I removed the Air Force patches and applied toddler sized Ghostbsuters ones I got from an etsy store. The name patch was even custom with her last name on it! This was probably the hardest part for me as I’m awful at sewing and I stabbed myself with the needle several times haha.

With the costume all assembled, we took her out in it on two days: The Saturday before Halloween and on Halloween. The Saturday before we went on a trip to the Indianapolis Children’s Museum’s Haunted House with her cousin and it was a lot of fun. The feedback was overwhelmingly positive and she was extra brave in the face of all the ghosts and monsters in the haunted house, probably because she had the scientific gear to deal with them!

Next, we went to the Irvington Indiana Halloween Festival, which was a huge outdoor festival with street vendors and food trucks and stuff. We couldn’t walk five feet without getting stopped for pictures. The reactions were really incredible. Finally, on Halloween, she wore it to visit her grandparents, aunts, and uncles. My favorite reactions had to be from my own parents, who reminisced about the days when I was young and would dress as a Ghostbuster as well.

We took her trick-or-treating at a mall’s indoor trick-or-treat event because it was snowing outside (ew). Lots of passers-by stopped her for pictures and she had a really good time. The best part was when we reached a stage area with a DJ at the center of the mall. Jennifer interrupted her candy quest to dance. The DJ saw her and cut off the song he was playing to play the Ghostbusters theme for her. A lot of people walking by stopped to take pictures or video (got one myself, attached) and it was a really awesome moment. Probably my favorite of this Halloween or any Halloween.

We hope you enjoy her costume and thanks for any and all consideration and appreciation of it! 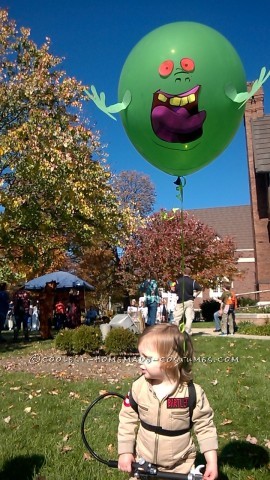 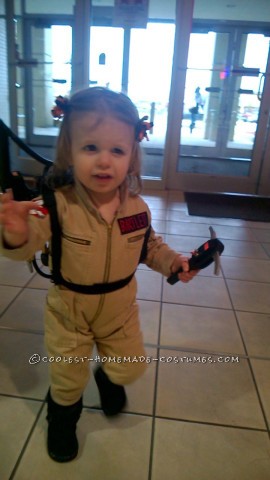 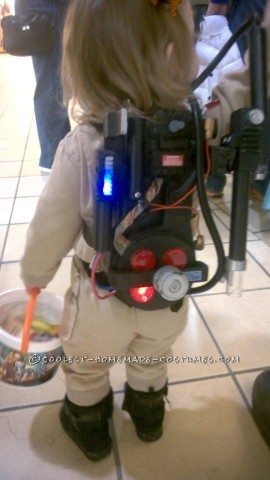 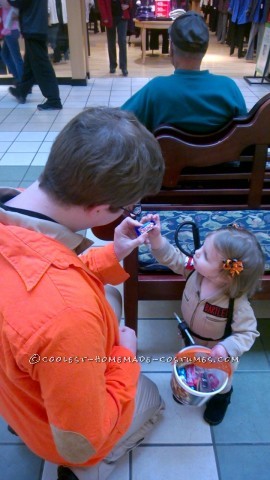