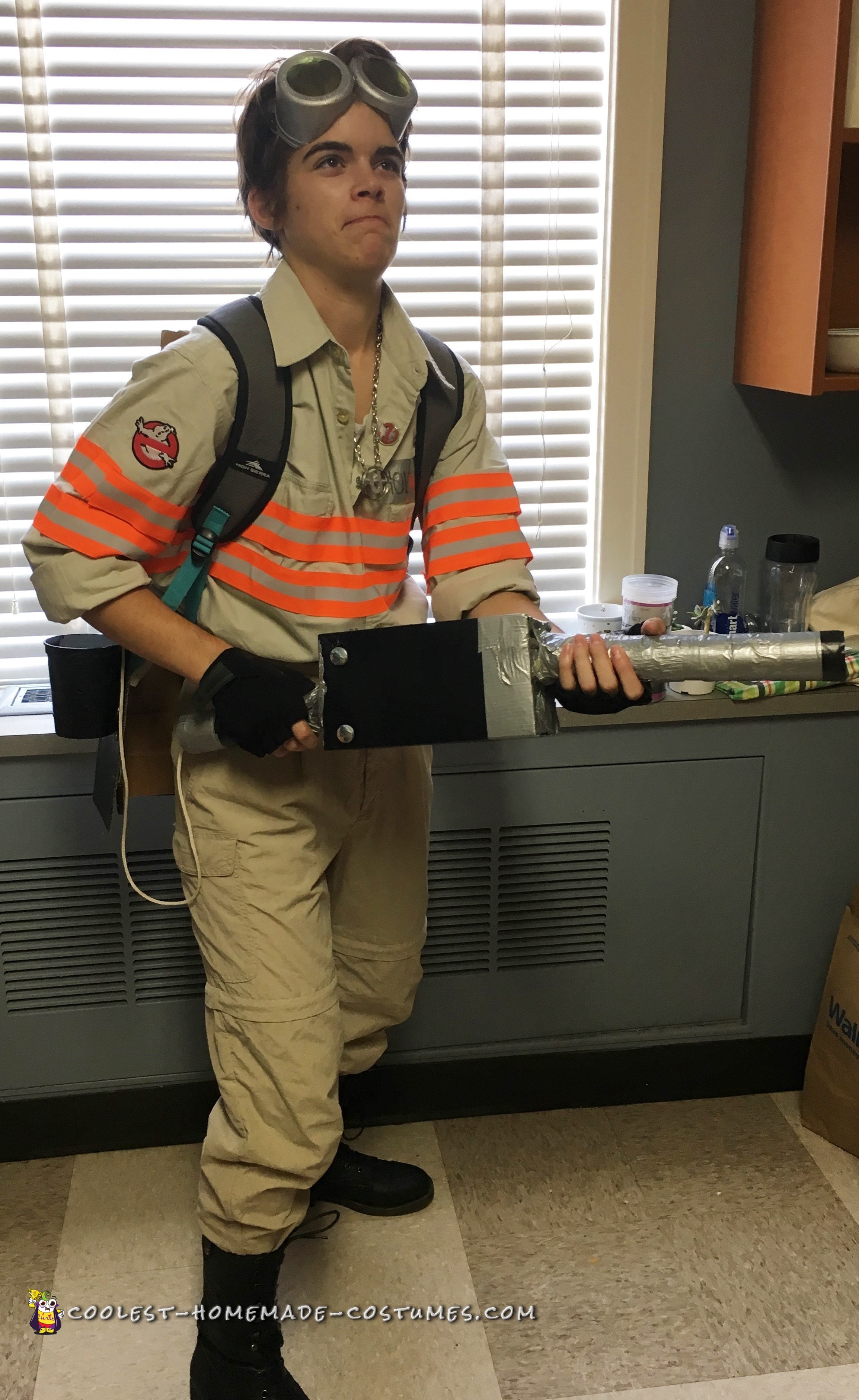 After seeing the new Ghostbusters film, I fell in love with the movie and especially with Kate McKinnon’s character, Jillian Holtzmann. She was so unafraid to be herself and her quirkiness (and let’s be real, her gay vibes) were really inspiring to me as a gay woman in science.

I love to make my costumes from things I can find around the house, at thrift shops, or elsewhere, but for this costume, I went out of my way to avoid buying supplies for it. Holtzmann prided herself on making elaborate inventions and machinery out of scraps she found while scavenging, so I felt it was important to incorporate that aspect of her personality into my costume since it’s a trait we share. For the proton pack, in particular, the vast majority of parts were collected from friends’ recycling bins and from car parts found on the road.

To make the jumpsuit, I tucked a tan long-sleeved button-up shirt from my dad’s closet into a pair of hiking pants I owned. I ordered some reflective ribbon from eBay for $4 and used double-sided tape and hot glue to affix the reflective stripes to the sleeves and chest area of the shirt. I wrote “Holtzmann” in Sharpie on some duct tape and put a strip of packing tape over it to ensure it didn’t get wiped off before attaching it to the shirt. I ironed a patch (that I bought on Amazon for $4) to the right sleeve and attached a Ghostbusters pin (that was provided at the movie theater when I saw the film) to the left lapel. The hiking pants were tucked into black combat boots I already owned. I wore my black weightlifting gloves as well.

To make the goggles, I took two circular Tupperware containers and cut part of the sides off to be able to bridge over my nose, as well as cutting out a circle from the bottom of each to leave room for lenses. I colored the plastic in with silver Sharpie and used a hot glue gun to glue the two containers together, and cut a slit in the lips of each of the containers to fit a black elastic band (from an old binder) through as a strap. I went to my university’s art store and found a yellow sheet of PVC ($1.50) that I cut 2 circles out of, nested them at the bottom of the containers, and hot glued to seal them in place to make the yellow lenses of Holtzmann’s goggles.

To make the necklace, I bought a key ring for $1 and put a screw through the two metal portions of the ring (sandwiching it between the metal rings). I then used metal cutters to cut the top and bottom off of a soda can, flattened out the metal of the can, folded it over and glued it with superglue, and cut out a metal “U” from the sheet. I then hot glued the U to the screw. I bought a chain from Michael’s for $3 and used needle-nose pliers to remove a link from it, and then used the pliers to open two of the links, attach them to the key ring, and seal them shut. I hot glued them to keep the key ring from sliding around.

Finally, to make the proton pack, I took a large piece of cardboard (that had been the packaging from a shipped textbook) and painted it black. I then took two hubcaps that I had found and hot glued one to the cardboard and then one on top of the first one. I glued a road reflector, a red car reflector, and a paper towel tube wrapped in silver duct tape to the cardboard as well before using silver duct tape to affix the piece of cardboard to a backpack.

I painted two tissue boxes black as well as a plastic cup with the bottom cut out. I cut the side out of one of the tissue boxes, added yellow construction paper and some nuts, and colored some stripes with Sharpie before hot gluing it to the cardboard. The plastic cup went on one of the side panels of the cardboard to serve as a holster. A screw was pushed into the cardboard and glued in place and a length of string was tied to it and glued down before being tied to the handle of a Nerf gun that I owned.

This gun was placed inside the cut-out tissue box that had been glued to the cardboard. A large bolt was similarly placed at the top of the cardboard, with some thicker string tied and glued to it. The string was knotted at one end and threaded through the lid of a Gatorade bottle, through a hole that had been burned through with the tip of my glue gun. This lid was taped to a paper towel tube that had been wrapped with silver duct tape and taped into the side of the other painted tissue box.

Several screws were placed on the sides of the tissue box for flair, and on the other side of the box the nozzle was formed by a second paper towel tube that had been duct taped in, colored with a black sharpie, and wrapped with some duct tape and electrical tape. This proton gun could be placed in the aforementioned black plastic cup holster or carried around for effect.

For some finishing touches, I drew the Ghostbusters logo and glued it to the center of the hubcaps, and I found a hot glue stick that had been colored green and used it to drizzle over the hubcaps as green protoplasm (aka the slime in the movie from the ghosts). To top it all off, I will be carrying a can of Pringles with me (as Holtzmann loves them).

My friends were taken aback, to say the least, by the intricate details I had incorporated into the costume, and were impressed by how accurate it looked while still using random parts I found on the street and in my house. My friends who hadn’t seen the movie were equally impressed just due to how elaborate the costume was and because I did it all while being a full-time college student.

Friends who had seen the movie especially admired how I pieced together the costume from parts I’d scavenged because they knew that’s how Holtzmann herself would do it! My family has even said that it looked better than the store-bought costumes they were considering! I’m hoping it will impress those at the Halloween parties I’ll be attending, as well as turn some heads when I wear it to classes on Halloween. 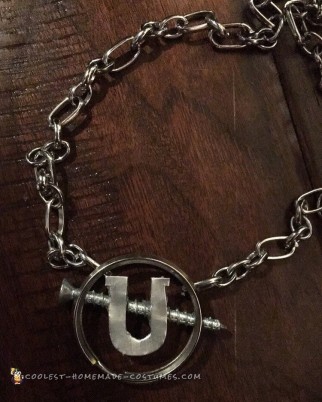 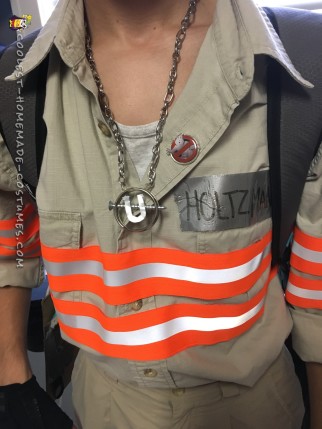 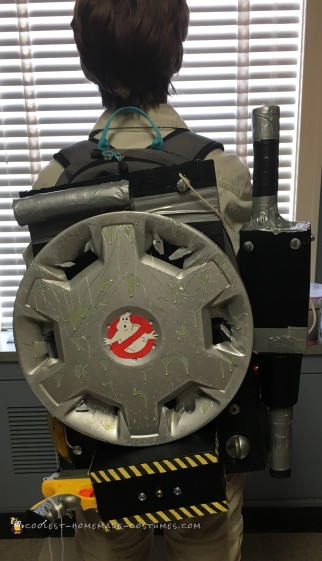 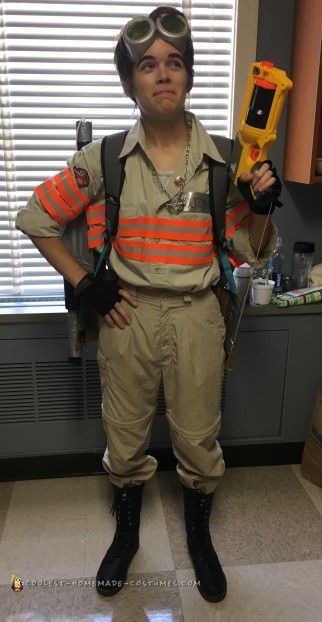 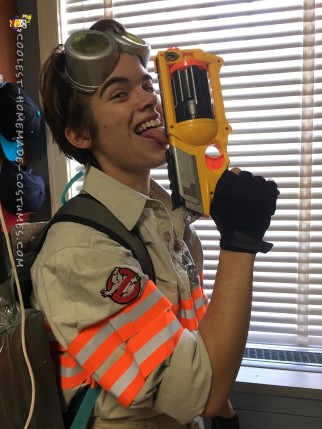