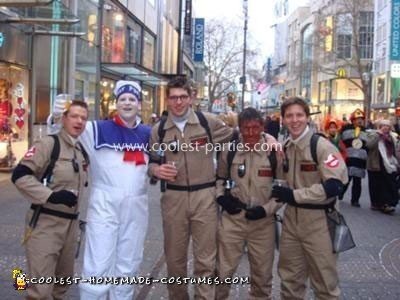 Who you gonna call? – Ghostbusters!!!

This Homemade Ghostbusters Group Costume is a great costume idea for a group of five, especially if one guy has the right size to do the marshmallow-man.

For the Ghostbusters costumes we took four regular worker’s overalls and bought some patches, Ghostbuster logos for the sleeves and one for the back-pocket. And of course badges with the names of the guys. We reactivated some good old army boots and we used old socks as elbow pads. If you’re a bunch of white guys like us, one needs to put on some dark makeup to make a good Winston Zeddemore. That’s pretty much it for the basic costume.

The tricky part was the backpacks. At first we thought about doing handicraft work with old vacuum cleaner tubes or something like that. But then we came up with the marvelous idea of using beer-backpacks. If it’s factious that you have to wear a backpack for the whole time, why not carrying something useful? Now tell me something more useful to carry during a party than beer! We did some handicraft work on the tubes ends to have a handholds, but instead of shooting ghosts we enjoyed our beer.

Now, the marshmallow man is complete homemade. A white overall with filling material, white gloves and homemade collar and hat. Some white makeup, and there you go, and don’t forget to bring some marshmallows with you.

Enjoy the pics and stay Puft! 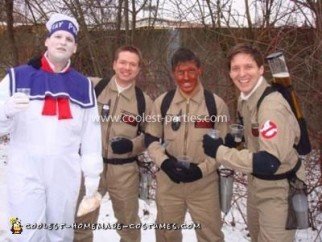 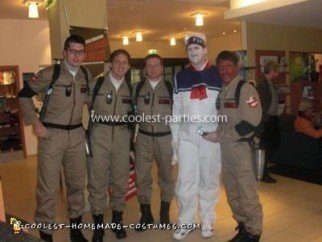 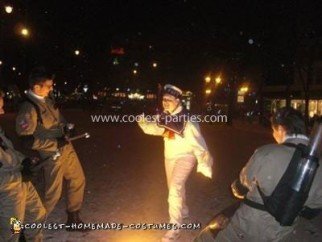