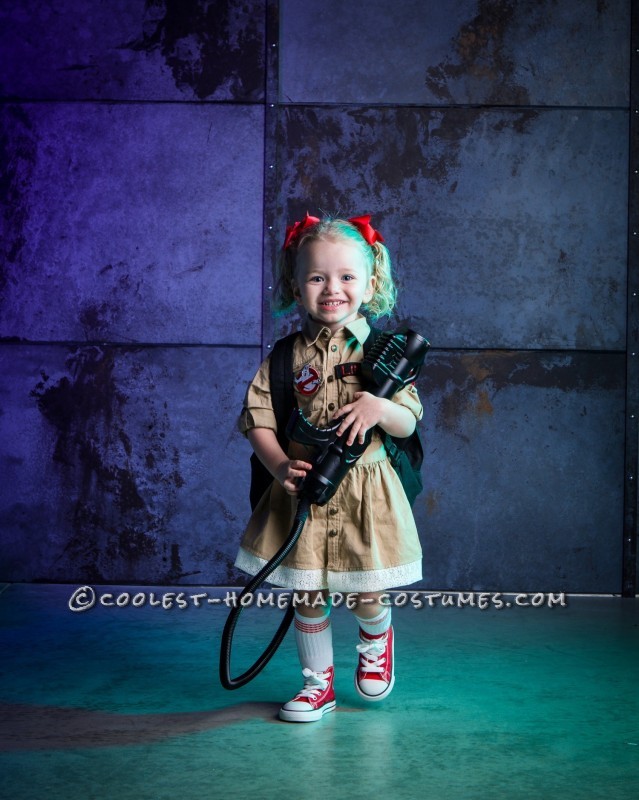 All my friends are dressing their babies up as fuzzy zoo animals or some costume that came in a bag from the store.  That just is not my thing.  This was my daughter’s third Halloween, and her third Halloween being something unique and not baby-y.

In September I had the idea I wanted her to be a Ghostbuster, but a girly one!  In a dress! I searched and searched for a khaki dress and found the perfect one online.  I ordered in it a size 2T, and it was of course too short on my giant baby.  It would have taken too long to ship back and buy another one, as we needed it ready by 10/21 for a community Halloween party.  Luckily my mother-in-law came to the rescue and sewed on some lace at the bottom to add some length to the dress.

I ordered Ghostbuster patches online, and I was so lucky to find smaller ones perfect for a toddler! I bigger one would have taken up her whole chest!

I bought a two dollar black backpack from the thrift store for her proton pack and cut off three inches of strap to make her name tag for her dress.  I used red 3D fabric paint and wrote her nickname “Lina” on the strap (short for Evelina, which didn’t fit).

I also bought an air pump and nerf gun at the thrift store to assemble her proton pack.  I spray painted the once neon gun mat black, and could not believe how well it took! I used the hose from the air pump, along with electrical tape and hot blue to attach the nerf gun, hose and backpack.

My father-in-law went digging in his basement for old cords and gave us red and yellow, which I attached to her proton pack.

For Halloween night I transformed her Cozy Coupe car into Ecto-1 with crate paper and the Ghostbusters logo!  We even had speakers and an iPod in the back playing the theme song as we walked the neighborhood.
I was so obsessed with this costume I made sure to take her to any Halloween event I could find!  We took her to our city’s festival, a downtown event, lunch and desserts on Halloween day, and of course trick-or-treating.

I literally had probably five dozen people tell me it was “the cutest costume they had ever seen!!!” I had to tell everyone how I assembled it, where I got my pieces, etc.  I even had a few offers to buy it!  At our community party, the Ghostbusters theme song started playing and everyone around her was thrilled.  They all made a circle and danced around her like she was a little celeb.

Even men were in love with the costume.  I took her into Jamba Juice and a young guy who looked like he didn’t have kids said it was the best costume he had ever seen.  While trick-or-treating, she received extra candy from several people because they loved her costume so much.
I posted the professional photo on my facebook page and it received 79 likes!  Usually I will get 15-30 for a photo!  I couldn’t believe how many people liked it.

I don’t know how I am going to top myself next year! 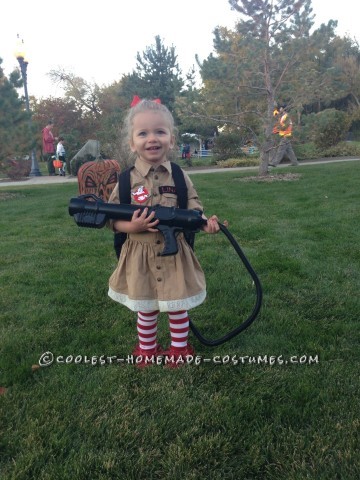 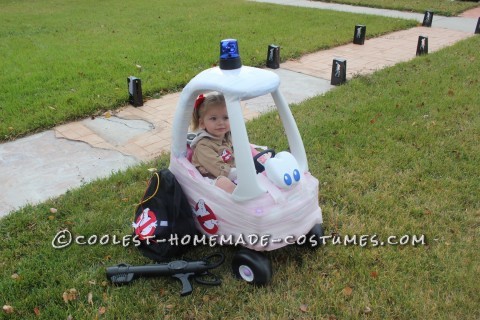 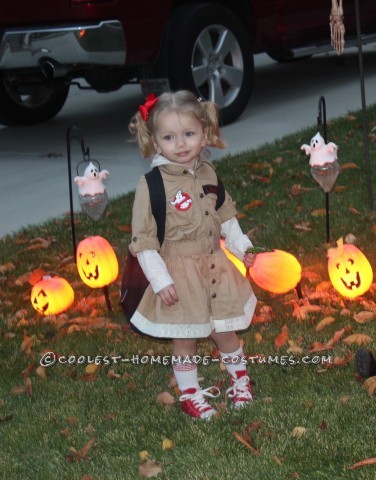 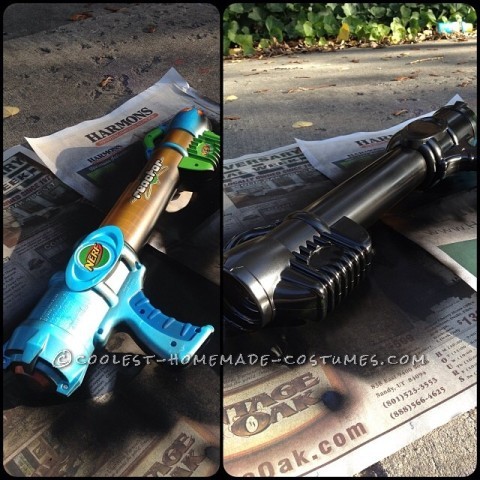