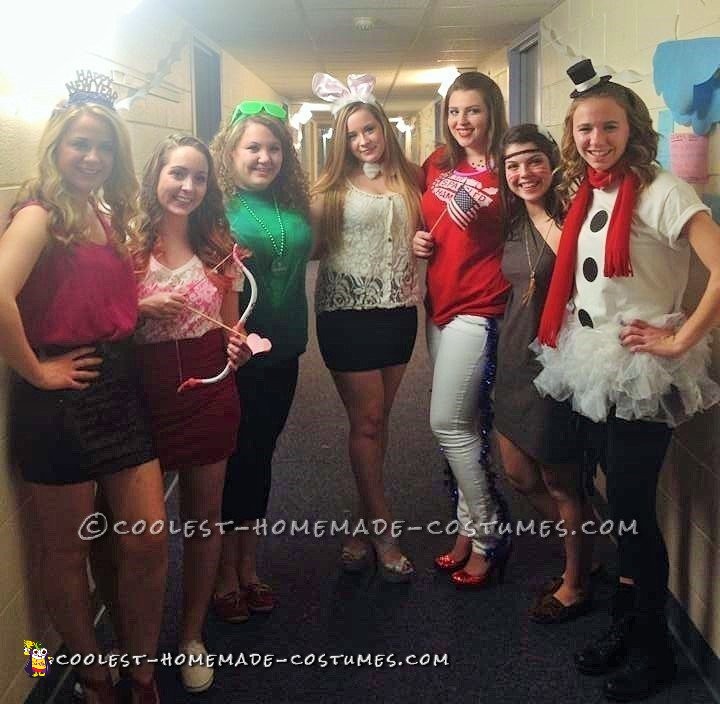 As a group of 7 girls we had a little bit of a hard time finding a group costume that we all liked. Luckily, we thought of dressing as different holidays and it turned out super cute! We tried to use things we already had and only purchased a few things  – it was a super easy group costume!

Valentine’s Day: K wore a white lacy top with a pink bandeau and a red skirt. She painted a toy bow and arrow from the dollar store to match her outfit and had white feather wings to look like cupid. K finished the outfit by spraying the tips of her hair pink and putting lipstick kisses on her cheeks.

St. Patrick’s Day: J got lucky and found a green t-shirt from Walmart that looked like a faux-tuxedo and said “Kiss Me I’m Irish” (she also got to use it again for the real St. Patrick’s Day!). Black pants and green shades finished the leprechaun look.

Easter: G bought a set of rabbit ears, a bow tie, and a fluffy rabbit tail from the costume store and wore a white top. She also painted her face with a pink nose and whiskers to look more like the Easter Bunny.

Fourth of July: C stapled blue sparkly garland down the side of white jeans, found a red shirt that said “Star Spangled Hammered” and red glitter heels that were once worn for a Dorothy costume. To look as patriotic as possible she stuck red, blue, and silver foil stars on her chest where the cut t-shirt draped, wore glowstick necklaces, and carried around a mini American Flag.

Thanksgiving: We probably had the most fun making E’s Native American costume for her Thanksgiving look. She bought an XL Brown tshirt, cut it to be one shouldered, then cut up one side into little strips and strung autumn colored pony beads onto the strips. She wore moccasins, a braided headband, and feather earrings. She drew stripes on her face with eyeliner to look like war paint and on her arms to look like a tribal tattoo.

Christmas: K had a lot of pieces of her costume already in her room: white t-shirt, red scarf, black leggings, and black boots. A piece of felt was cut into circles and pinned on to the t-shirt to look like coal buttons. She had to buy a cute little top-hat and a white tutu to give the costume some dimension and add a girly touch. 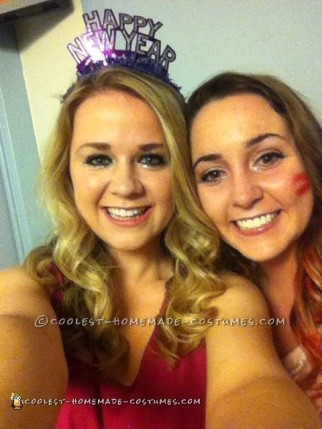 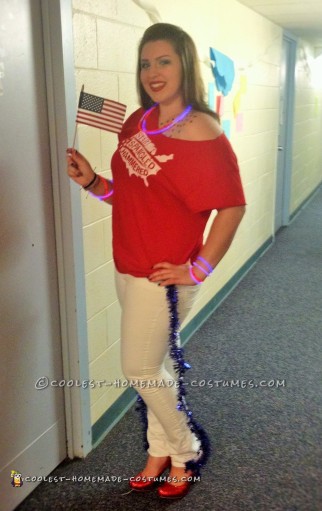 Most Creative Holidays Costume for an All-Girl Group