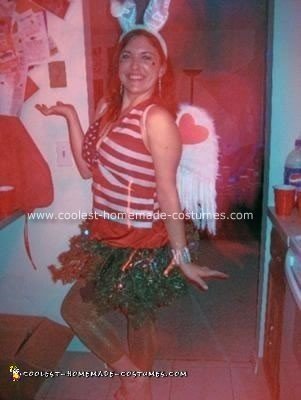 This was my costume from last year, but I just stumbled on this site and think it’s great for people to share ideas. Last year, I wanted to do something super creative and economical instead of buying a standard costume. My criteria began with asking myself, what’s unusual/never been done/very creative, yet cute, something people will get, needs to be feasible to make, and under $50?

I love all holidays (Christmas being my favorite) and was thinking of being a Christmas tree with blinking lights. I’ve seen people be Christmas presents and “God’s gift to men”, and sexy Mrs. Clauses or elves, but I didn’t want to repeat any of those since they’ve been done. I wanted to do the tree, but had to figure out how it could be cute (and not overtly skanky as all the costumes are these days). So I began with the idea of making the main part of the costume a Christmas tree skirt.

Then, I thought it would be cool to be a girl jumping out of a cake instead, but then my idea somehow morphed into being all the holidays. I had an epiphany and thought, how cool would it be to mishmash ALL the popular holidays together. So I sketched up a quick drawing and decided there should be a part or accessory for each holiday.

• “Christmas” – I made the skirt out of a petticoat, garland, and LED Christmas lights (battery operated). I ordered the petticoat from ebay for around $30 including shipping (that was the most expensive piece of my costume, couldn’t really find one cheap anywhere). Then I bought the garland and lights at Walmart. I put the petticoat on and went about snipping pieces of garland and safety pinning them onto the petticoat in layers, working from the bottom up. Then, I wrapped the lights around (had to kind of stuff the battery box into the “thistles”). I decorated it with Christmas tree decorations I use on my regular tree. I also bought mini candy canes and even put some of those on (was a hit giving them out at work) and added tinsel. I even had a shoutout to Hannakuh, had a little blue dreidle-type ornament on my skirt.

• “Thanksgiving” – I bobby pinned/hair-tied feathers into random strands of my hair (cheap, quick, and easy, but they did fall out throughout the night).

• “Valentine’s Day”- I bought angel wings and cut out red construction paper hearts to tape to them (equates to cupid). I also wore a heart sticker on my cheek.

• “4th of July” – I bought about a yard of patriotic flag-looking fabric at Walmart and cut it/safety pinned it strategically onto a red halter I own. I also wore a few red white & blue star stickers.

“Birthday” – I made a bracelet out of birthday cake candles and clear packaging tape.

• “New Year’s” – I bought metallic noise makers at the dollar store (6-pack) and walked around with one when showing off my costume (and handed out the others at midnight during our party.)

• “St. Patrick’s Day” – I made a shamrock necklace out of stickers

• “Halloween” – I didn’t really incorporate a literal representation of Halloween into the costume (i.e. something black and orange) since the costume itself was for Halloween. You could probably wear black and orange striped tights to hit that mark, or wear a Halloween ornament on the skirt (or cheesy earrings of some type, like dangling skeletons)

I topped the costume off with fake eyelashes just for fun. I also wore gold leggings to keep warmer, add more flare, and make it less skanky (could go with Christmas too).

The costume was a hit, as some people got it, others had to guess. I won “Most Creative” costume at work, which is pretty neat, considering I work at a marketing agency full of creatives. At my Halloween party, I controlled the lights to blink or stay on, and it looked really cool in combination with the glowing of my wings and white stripes in my top, under the black light.