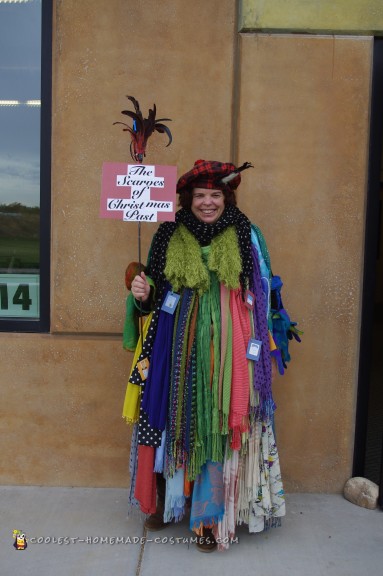 I love creating an original Halloween costume for our school Halloween Parade every year. As a teacher, I’ve received dozens of scarves as gifts throughout the years and I wanted to use them in some fun way as a costume.

I came up with “The Scarves of Christmas Past” for a costume based on The Christmas Story by Charles Dickens and his Ghosts of Christmas Past. Designing it cost me nothing and it was easy to put together. Plus, it was a blast looking through all of the scarves that I’ve received over the years. 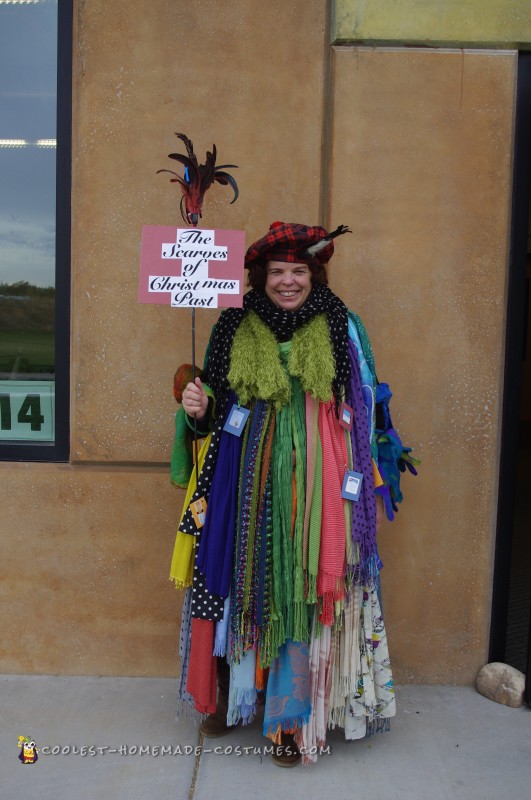 I chose two slender belts to loop my scarves around (photo 2). 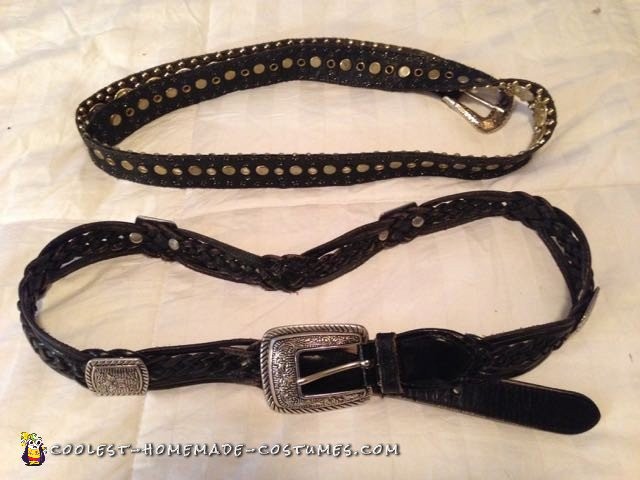 Looping the Scarves Around the Belts

I continued to wrap my scarves around one of the belts until it was completely filled up, saving enough room so that I could hook it around my waist. I tried to put like colors together (all the blues, then greens, etc.) but you don’t need to do this if you don’t want to bother with that.

I repeated the same process with the second belt. I now had one belt with scarves to go around my waist, and another that went over shoulders. 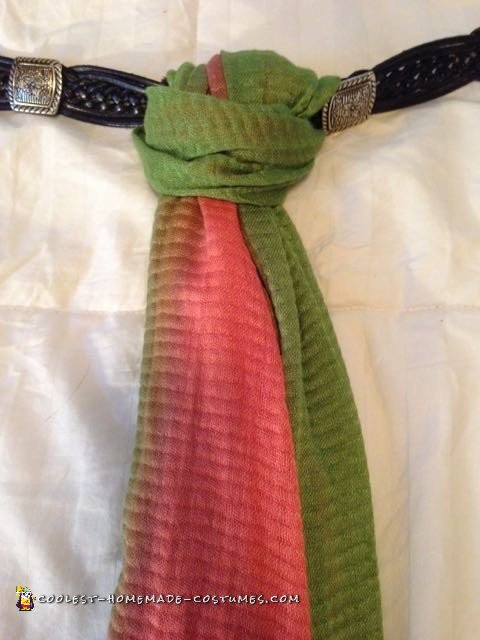 A belt with one scarf looped around it. 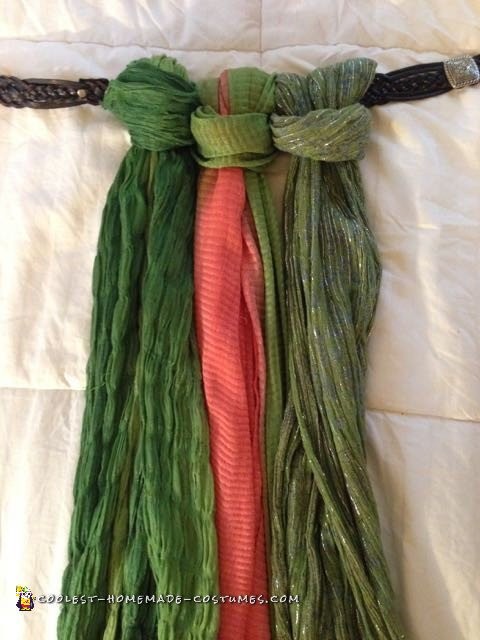 I randomly added holiday gift labels to scarves using parents’ and friends’ names. I couldn’t remember who exactly had given me which scarf, so I just added labels here and there, with the names of friends and family members on each label, along with my name. 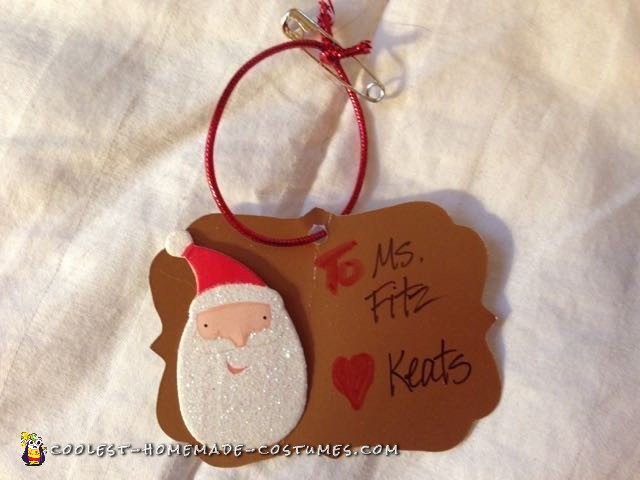 With both belts of scarves in place, I then wrapped a scarf on both of my lower arms and two more around my neck, added the Scottish tam, and the sign.

I made the sign out of construction paper and stapled it to an old cat toy. I printed the message “The Scarves of Christmas Past” and glued one to both sides of the sign. 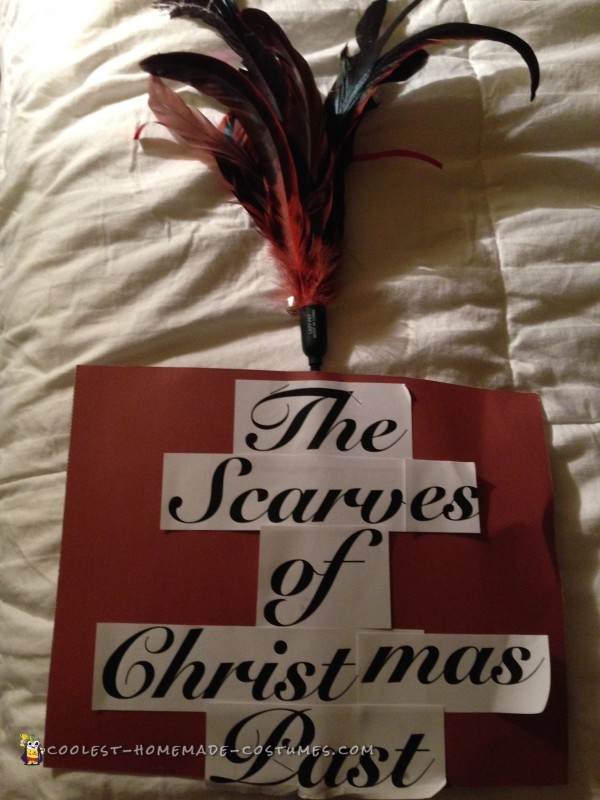 The costume is a tiny bit on the heavy side, but it’s really cozy for cool-weather parades! The kids in school loved it, and I know all those scarf lovers out there were dying to try the idea out using their own scarves. 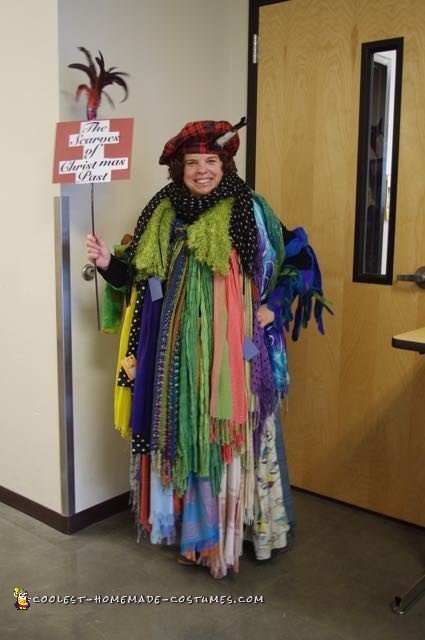