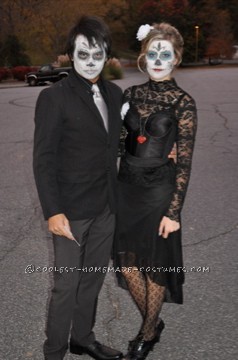 I came up with the idea for a Day of the Dead costume last year when my friend who lives in México and is a photographer did a photo shoot with the Day of the Dead theme. This last-minute Dia de los Muertos couples costume is one of the cheapest costumes I have ever made, and it was tons of fun! Pretty much everything that is needed for this costume is something you probably already own. Me and my boyfriend are both broke college students, so this costume was perfect for us. In total I only had to buy a black lace shirt (that I found at Goodwill for $3), fake flowers, face paint, and I invested in some bright purple fake eyelashes (but that could be optional). The total cost of the costume (for both of us) was about $14!

Here is what you will need, but there is a lot of room for creativity with this costume, and you can definitely work with whatever you already have:

The most difficult part of the costume was the face painting. I began by putting a base layer of white on each of our faces, but I left a circle clear around our eyes. Next I painted our noses black, and I painted the circle around his eyes black. I chose to use a thick, bright, creamy eyeshadow around my eyes to go with the fake purple eyelashes. Then, once the paint was dry I used black liquid eyeliner to add details on the face. My inspiration for the designs came from images of Day of the Dead candy skulls that can easily be found online. I recommend using a better quality face paint or acrylic paint rather that the really cheap stuff that is sold at Halloween, because we just bought the cheap stuff and had to be conscious about not smearing our makeup the whole night.

We got complements on our costume all night long, and it was great to represent a costume from the wonderful Day of the Dead celebration. 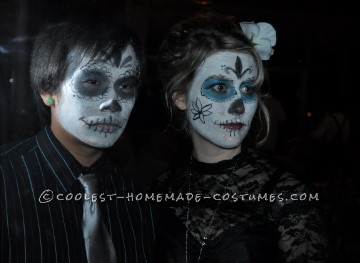 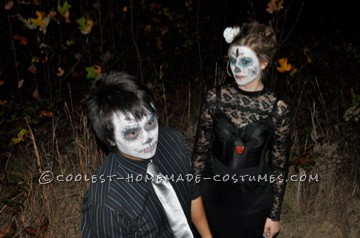 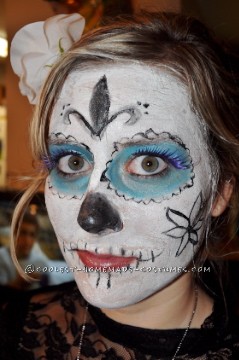