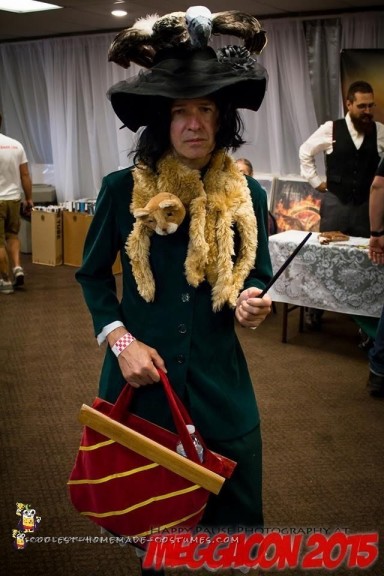 I started this costume with a trip to Value World used clothing to search for the 2 piece woman’s suit. I found a jacket and a matching skirt to fit me. I also picked up 2 big stuffed Easter bunnies and a Teddy Bear to use to create my dead cat collar. After gutting the used animals and some creative sewing I came up with the cat. It would have been easier to go to Joann for something that would have been easier to work with but the bunnies were cheap supplies.

So next I went to E-bay for cheap supplies. I ordered the lace gloves(not shown in this picture) and floppy black hat from E-bay.  I picked up a half yard of tulle from Joanne and topped the hat with it. I attached the tulle with some thread and added a black flower.

The Vulture body was made from a pair of used brown denim pants from Value World for fabric and the stuffing from the bunnies. I cut and sewed the basic shape of a Vulture body from the pants and stuffed it. I wanted it to look real so I chose to order real Pigeon wings and Roster wings from E-bay. Yes you can find real wings for sale. So I used the Pigeon wings for the Vulture and extended them with the primary feather from the Rooster wings using hot glue. I used the rest of the Rooster feathers to cover the body of the Vulture in feathers. I did not like the color of the feathers so I just painted them after I made the body. I attached the wings to the body with hot glue and coat hanger wire for support. I did need to trim some of the bone off with a hacksaw.  I plan to attach the Vulture to the hat with safety pins in order to remove the bird for later storage. Velcro did not hold.

The Vulture head was carved from a green foam brick from Michaels. I drew out the shape on a piece of paper and used it as a template for the head. I just found some pictures online to use as a guide for my drawings, after a failed attempt at freehand. It was easy to carve with a sharp knife. I covered the carved head with Mod Podge for strength and painted it with acrylic paints. The eyes were taken from a small Teddy Bear.

The black wig I had from a previous costume. It required a hair cut to work but since it was matted anyway, it worked out.

The purse I made from a zippered throw pillow cover I found at Value World and some misc wood and yellow ribbon from home. Cheap large red purses and black floppy hats etc can be found at used clothing stores like Value World but not this time.

The shoes are vintage boots I have from another costume.

The total cost was less than $50. Time to create about 4 weeks. This included shopping, crafting and working a job. Skill level is moderate.

My wife is creating a Hogwarts student outfit for herself. We will have a ‘Reddikulus’ couples costume for the next comic con. Harry Potter Severus Snape Boggart costume was a huge hit at the comic con. I even received an honorable mention the first time I entered a contest. 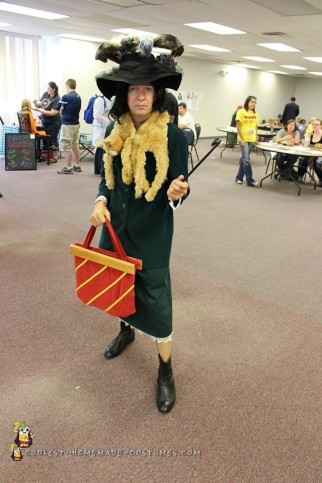