We ended up remaking parts of this Harry Potter baby costume a couple times due to the baby having growth spurts. By the time Halloween was here, he needed a new hat and a bigger robe!

The funniest part about making the costume was that it was constructed using lots of yarn and we have cats in the house. More than once, the cat would take off with the yarn and the hat would go flying.

We received that best compliments from this costume. I was suprised at how many people knew right away who he was supposed to be. We had one adult male ask to take a photo with “Baby Harry” and many teenaged girls oogling over him.

The robe: Using a pattern found on pinterest for a baby cloak, we sewed the robe. The most frustrating part about this was that when sewing the maroon lining of the sleeves, we accidentally sewed the sleeves shut. The Hogwarts emblem was bought off of Etsy and ironed on. The latch closure was bought at Jo-Ann fabrics and sewn on.

The hat, scarf and booties: Both the booties and the hat did have to be remade because my son grew so much over the course of the month before Halloween. They were croqueted with love by the baby’s grandmother. She also made black attachable hair out of yarn, since my son is bald.

Onesie:  White onesie with “LOVE” patch on the front. The “O” is the deathly hallows symbol. The patch was purchased off of Etsy.

Harry’s scar: Drawn on with eyeliner.

Misc. accessories: Hedwig, Harry’s owl, was a beanie baby keychain purchased at Jo-Ann Fabrics, his wand was made out of pipe cleaners, his glasses were found at an antique store and purchased for $4, his Snitch was made out of a ball with cardboard wings attached and spray painted gold. 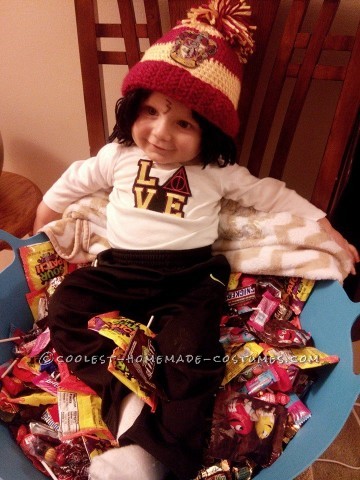 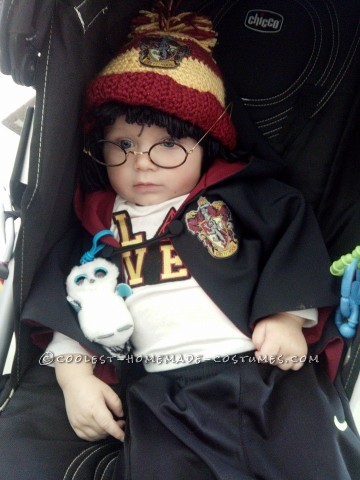