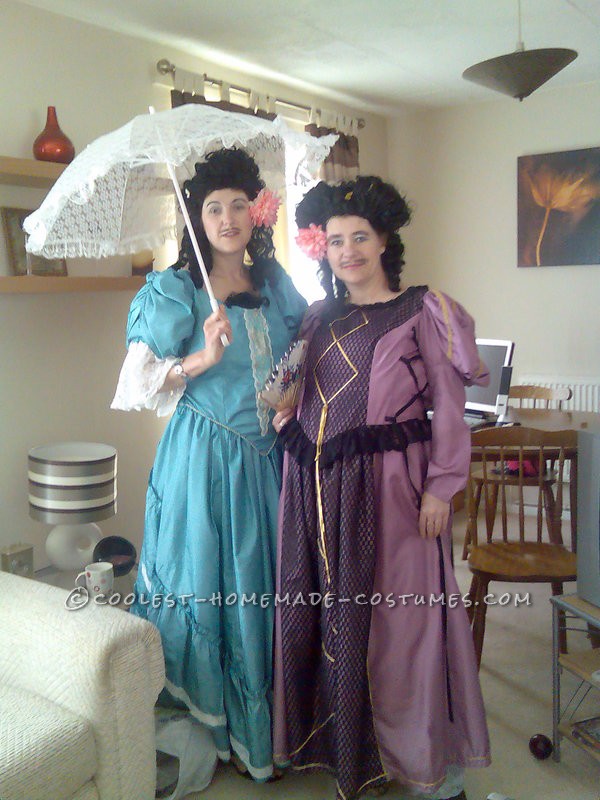 It took a while to create this rubbish Transvestites from Little Britain: Emily Howard and Florence Couple Costume for a TV Show fancy dress party. We thought long and hard about how to create it and make it as funny as possible. Obviously, we had a little help from the Little Britain show but it still required a little extra thought.

We sourced the dresses from charity shops….old bridesmaid dresses (rather large sized). We bought black curly wigs,  parousels, lace tights, fancy knicker bockers, black fur for eye brows and mustaches, plastic flowers and draw string handbags.We even used pillows to create the effect of having large stomachs and bottoms. Looking for the dresses in charity shops was such a scream, even the shop assistants joined in laughing at use when we tried out the proposed costumes.

In effect we were women trying to dress like men dressed as woman…yes I know confusing but hilarious. Getting the fancy dress was funny but getting ready on the night was extremely funny….we cried with laughter especially when put on the eye brows and mustaches. It must have taken us hours to get ready because we laughed so much. The taxi ride to the party was no different…people stared at us and shouted  I’m a lady’…. it was so funny.

On arrival at the venue our friends didn’t recognize us but when they did the howled with laughter. We were so convincing that an acquaintance said to a close friend ‘ aren’t those too men good looking..they have really achieved looking like woman although they are men’. After picking herself up off the floor after falling over with laughing so much my friend informed him that we were woman. What a result we achieved what we set out to do….convince people we were men dressed as woman.