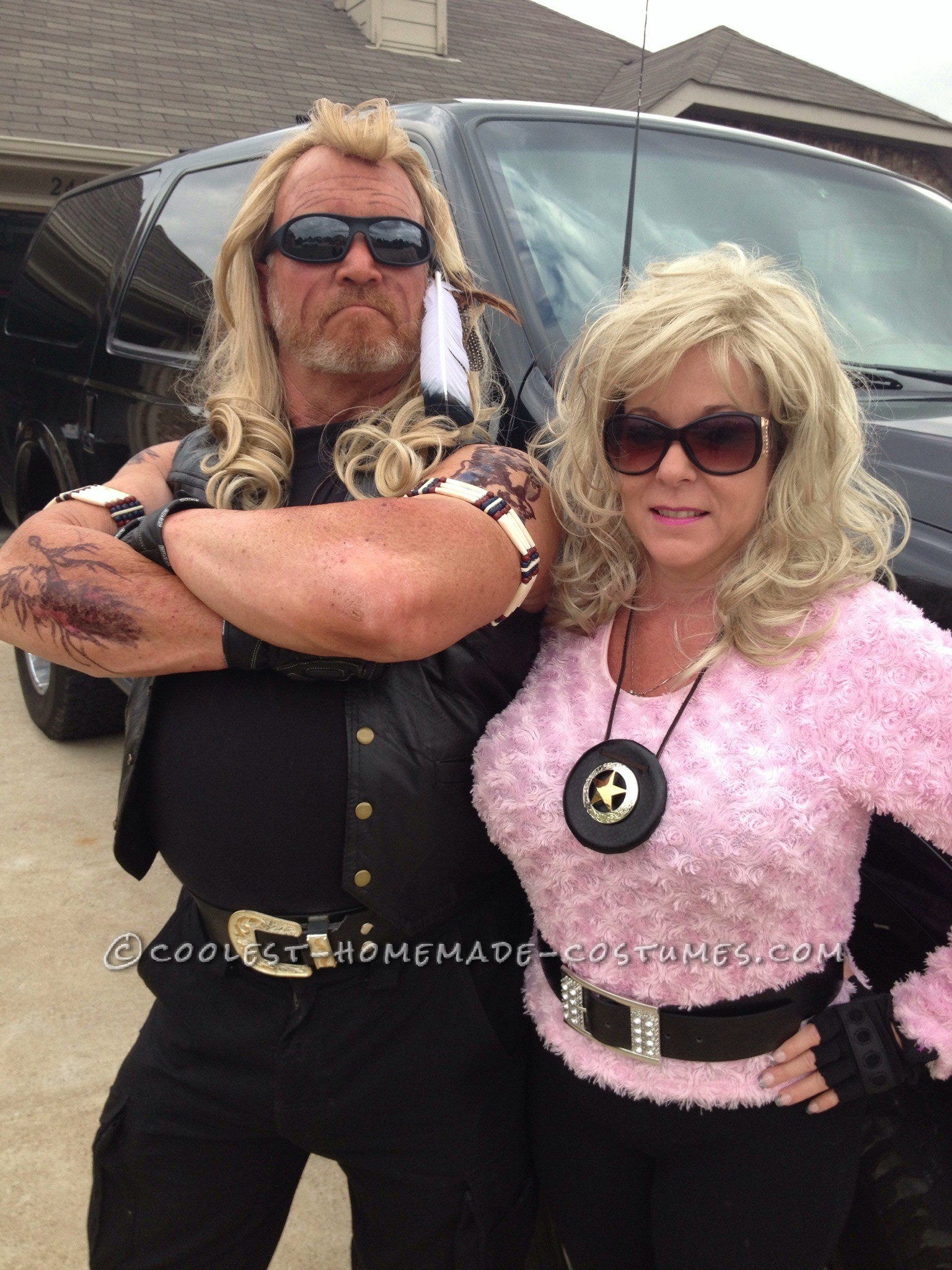 This Halloween 2013 my boyfriend and I were invited to a white trash themed Halloween party. We knew everyone there would be dressed up alike, overalls, pregnant women with numerous babies, cigarettes, rotten teeth.  For the last four years we have dressed up like pirates, think Pirates of the Caribbean. We rent our costumes from an actual theatrical production costume shop and then accessorize, accessorize, accessorize.  We always look phenomenal.  But this year we were ready for a change and looked forward to putting our white trash characters together.

I don’t remember exactly how we came to the decision to go as Dog the Bounty Hunter and Beth, but as soon as the words came out, we knew these had to be our 2013 Halloween personas!  My boyfriend is extremely creative by nature. He, of course, started watching as much of Dog’s shows as he could find so as to get his movements, expressions, walk, etc., down to a T.

I knew my costume was going to be pretty simple to put together. We went to the second hand store here in town and found a perfect pink sweater. I decided I was going to wear Capri workout pants and high heels. While shopping one day, I bought the largest bra I could find, 42-DDD and a bunch of balloons.  Boy, did we have fun trying to get the biggest boobs possible!! Yes, it was going to look cartoonish on me as I’m only 4’11”, but we also knew that they had to be over-the-top big!!

After observing Dog for several days, my boyfriend decided on a black vest and black pants. He had some nice boots that he added boot tips and heel rands to. He searched eBay and found arm bands that look identical to some Dog wears, so of course, he bought them.  We found some real handcuffs, and yes, we had to have those.

He studied all the different tattoos that Dog adorns. As I mentioned, my boyfriend is very creative and artistic. His goal was to have drawn out tattoos and have them temporarily applied, but he ran out of time. The night of the party as we were getting dressed, he sat down with Sharpies, yes, Sharpies, and drew them on both arms.  Yes, even his right arm which means he had to draw with his left hand.  Amazing.

We had fun searching and finding our wigs. Real wigs…not those from your local party store.  Of course his was a long, blond woman’s wig that he took scissors to to cut out Dog’s receding hairline!

So it’s the night of the party, and it’s an hour and a half long drive. We knew we didn’t want to drive all that way with long wigs and big boobs!   We stopped at a convenience store as we got off the highway. Keep in mind this is a small, country town. We put on all the finishing touches in the parking lot. The clerks and customers LOVED us.  They’d walk by acting like they weren’t looking but smiling. As we finished the final product, clerks were asking for our picture.

My boyfriend borrowed his brother’s huge black Excursion which sounded like an airplane taking off, and it was the final touch for Dog and Beth 2013.  We come flying onto the property dirt spinning everywhere.  Tracy (my boyfriend) throws the truck in park and gets out running asking for the guy whose house this was.  Nobody knew for a couple seconds what the hell was happening!!

We entered the party, and as expected, most were dressed as we thought, and there were some AWESOME costumes.  Of course, for some reason, all the guys were so intrigued by Beth!! And everyone loved Dog.  But this was not surprising as each year, everyone has come to expect us to be “over the top” in preparing for and carrying out our Halloween dress up fun.

We went out the following night in my city.  There were two activities set up for the kids, one in downtown and a carnival setting over by the lake. We hit both, of course. A friend of mine a few days later told me she saw me at the downtown activity but did not recognize me!!!  Mission accomplished, I guess. One lady stopped her truck in the street to get a picture of us.

At the carnival by the lake, we were astonished and amazed by how many adults either spoke to us, hollered at us and wanted their picture taken with us!!  We do think there was a couple that thought we were the real Dog and Beth!!  Kids were not interested in us at all, which we found interesting. We returned to the hotel we were staying at and were sitting at the bar.  Again, several people came up to us wanting their picture taken. Our bar tab said “Dog/Bounty Hunter” so the bartender knew whose tab was whose!! As we got up to end our evening, I turned around and a table of about five was right behind us, and the lady said, “Okay.  Now I know y’all aren’t real.  I see your boobs now!!!”

What a great Halloween this year.  We’re doing it again tomorrow night on Halloween when we go to the Arboretum gardens to hear a concert. They have a costume contest, so we’ll see how well we do.

We’re already thinking and planning for next year!!! 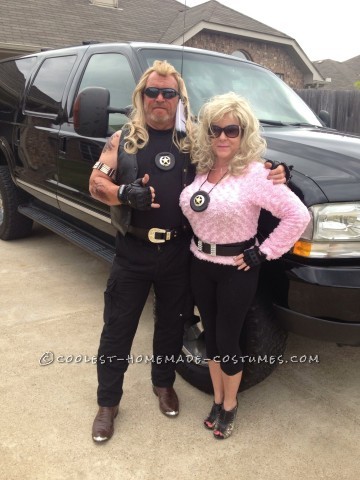