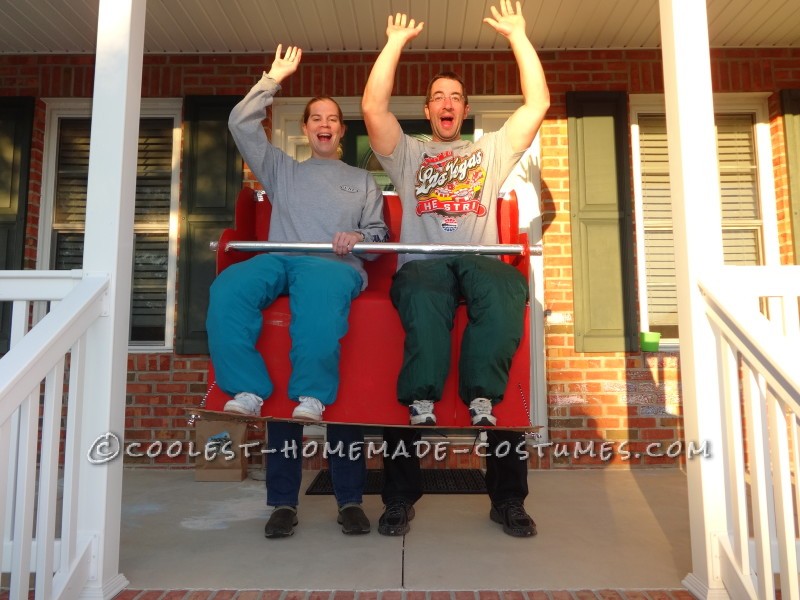 My husband and I saw this Roller Coaster costume mentioned on a website somewhere. I thought it sounded really clever and original, so we went for it. My husband ended up constructing it and his vision ending up being far better than I’d even imagined.

He constructed the main “carnival ride” part of the costume out of an extra-large cardboard box. He used lots of glue and even paracord to make sure the foot part of the ride stayed upright and secure. The kids and I help paint it red and glued the letters on the back. Next, we went to the local Goodwill store as a family and picked out some pants that we thought looked really “touristy”. We found some cheesy parachute pants. Then, we decided it would be funny if we were wearing little kids shoes.

We came home from Goodwill and all stuffed the pants together using newspaper. It was fun to see the kid’s excitement in doing that. My husband used his ingenuity to get the pants and shoes to all stay together. He drilled holes in the shoes and the foot part of the cardboard box, then ran paracord through the shoes, pants and cardboard to make sure it all stayed put. After that we trimmed the carnival seat in silver to make it look a little more authentic. We cut holds out of the main part of the seat so we could stand through it to make it look like we were on the ride. It was really fun to make, especially since it was a family affair. We named the ride “Rebel Yell” after the ride at Kings Dominion, and as an ode to living in Virginia.

We wore the costume to our church’s Halloween party and it was a huge hit!! Lots of people were commenting on how funny it was and we won the best couple costume of the evening. 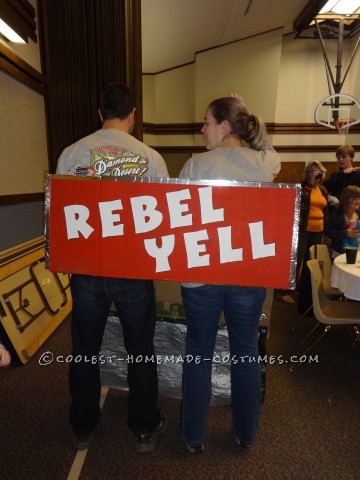