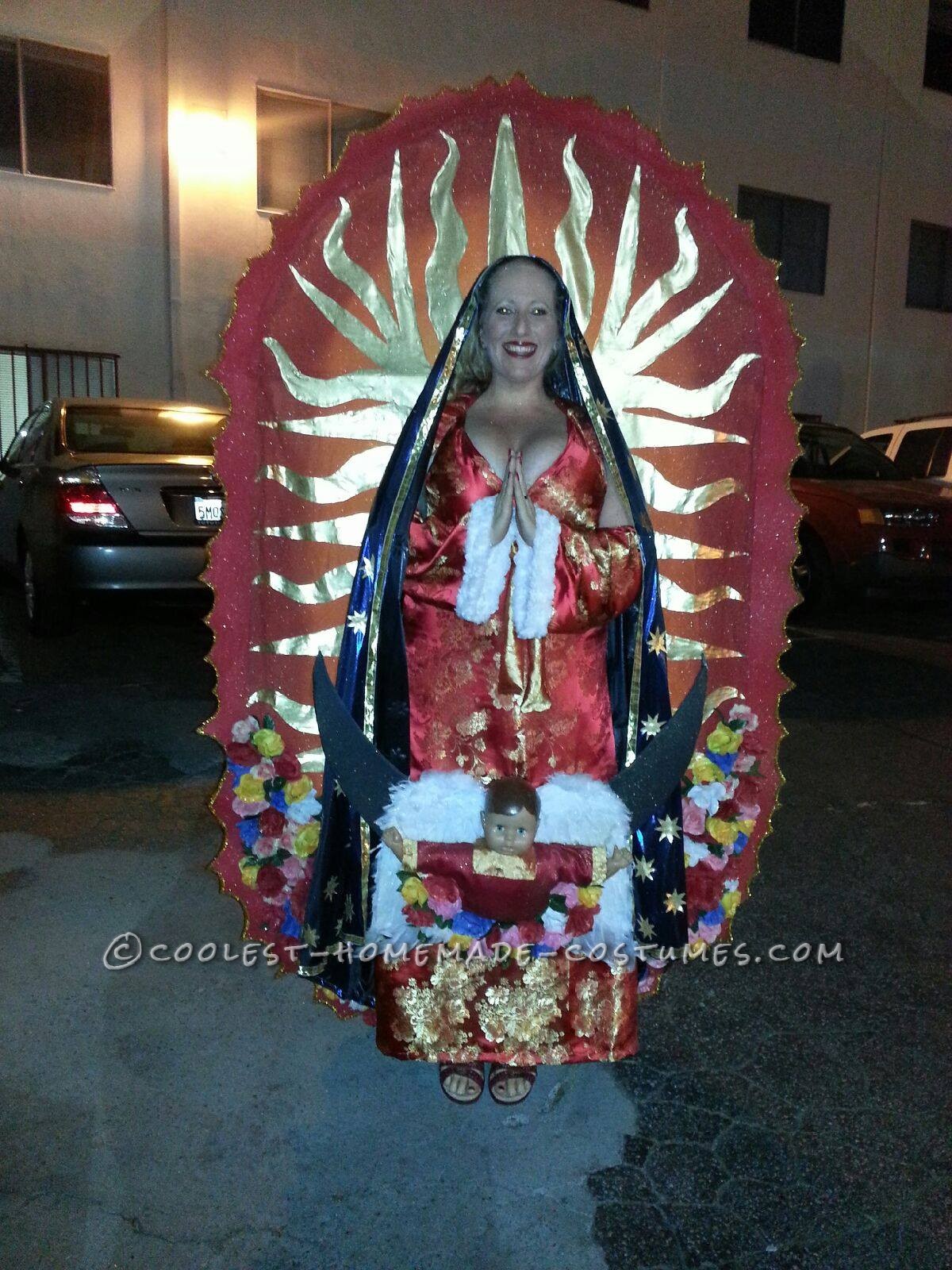 I had dreamed of making this costume for many years but never was able to figure out to go about making the rays of sunshine radiating  from the virgin.  One day I saw a little girl hula hooping and it hit me.  A hula hoop would be the perfect light weight frame to build a backdrop off of.  I bought one and the rest is history.  The whole plan just fell into place.  It took me three months of almost daily crafting to make it happen but I’m pretty damn happy with the final product.

I knew I had to go big because we were going to West Hollywood’s big Halloween street party and let me tell you those drag queens take their costumes pretty damn seriously.  Also I knew I would need to triple the glitter levels because those ladies sure do love to sparkle.  The finished product was unbelievably well received and I had hundreds of people photographing me.  As for the process of making this epic piece, as I said, it all started with a hula hoop.  The frame was built with the hula hoop, PVC pipe and an old backpack (see picture)  I then bought some cheap light weight material and spray painted the colors.  Then I added the rays and using stiffened felt and glittery gold pipe cleaners I made the flames around the edge.

I then bought every fake rose the 99 cent store had to offer and went to town with a glue gun. Added more glitter and was on to the veil.  For the veil I hand cut out over 200 stars and glued then on to a fabulous piece of metallic blue material, added a gold ribbon edge and attached a comb and added more glitter (noticing a trend?) and moved on to the lil angel.  For the lil dude I bought a doll at the swap meet and chopped him in half, painted his hair,made him a shirt and gave him some wings.  This got attached to a crescent moon made from foam board (gotta keep this thing light as I have to wear it all night).  I added a bunch more 99 cent store roses and a bunch…more glitter!  Then I made a dress out of the closest material I could find to the color and pattern of the original drawings.  Added some white fur to the cuffs (just like the og) and made a belt that doubled as a waist strap for the backdrop.  Then I glued the angel/crescent moon creation to the front of the dress.  Then I added one last layer of glitter and my creation was complete!!!!   I am so stoked on how it turned out.  I hope you like it as much as me!!!!!! 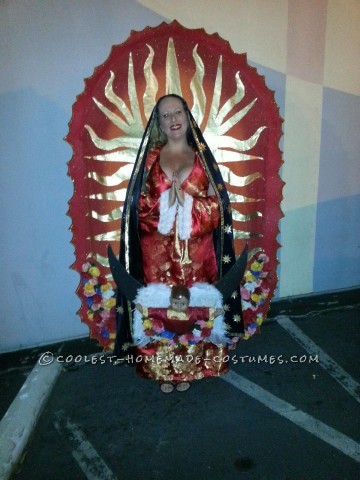 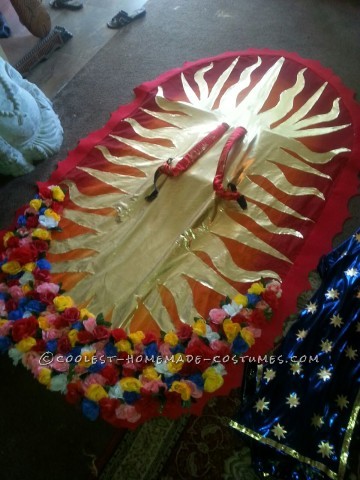 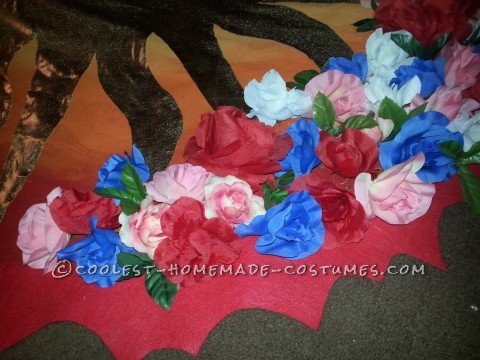 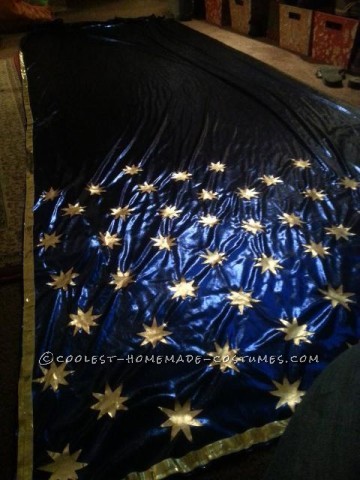 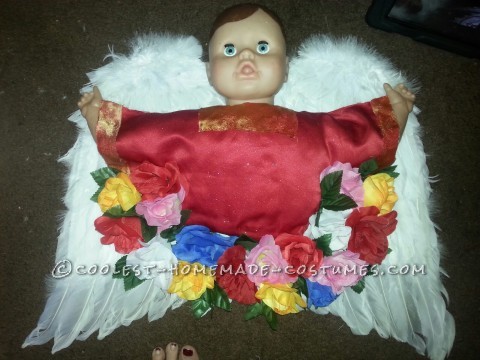 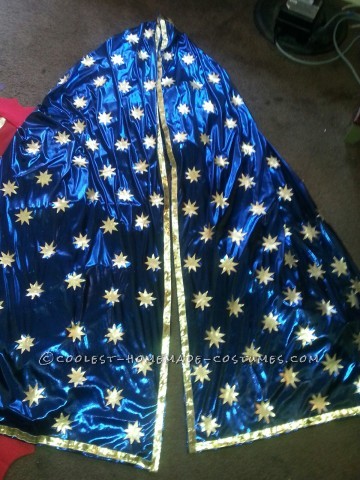 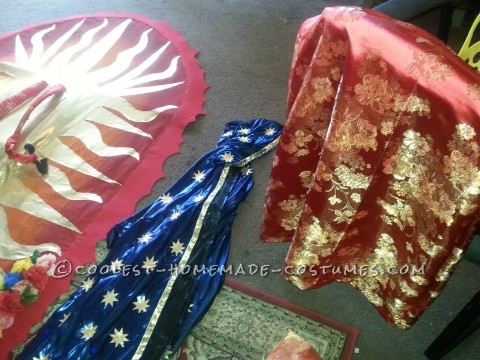 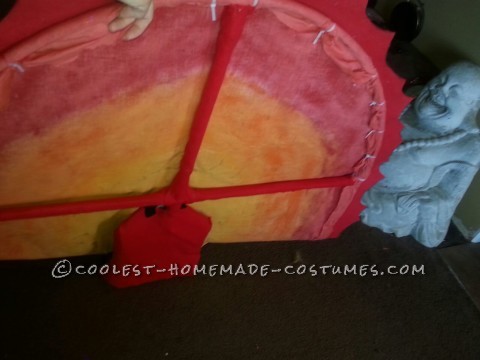 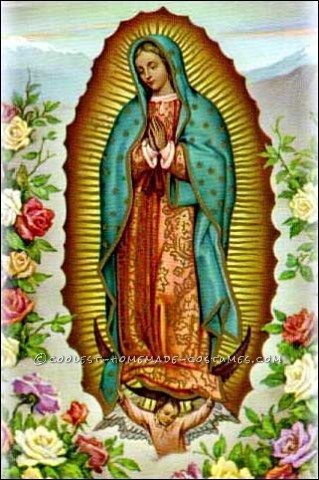