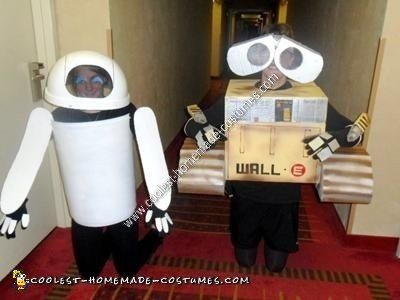 To start, it helps to understand the costume if you have seen the Pixar movie, “WALL-E.” My girlfriend and I are in love with that movie so we decided to make costumes of the two main robots WALL-E and EVE.

For WALL-E’s costume, the only materials that you need are 1. Cardboard, 2. Hot glue gun, 3. Black gloves & Panty hose, 3. Spray paint, and 4. Screen Mesh (I used old leftover screen from a pool screen cover). All in all I spent roughly $20 bucks on my costume… the kicker was I spent around 10 hours making it (even though it was made of cardboard- I can still be a perfectionist).

I started by folding the cardboard into a box. I almost completely cut out the bottom of the box so that it would allow my body to fit through. I then cut out a hole in the top so that my head would fit through. Then I continued to cut to more holes, on on either side for arm slots. So now there are a total of four holes, one VERY large at the bottom, one medium on top, and two relatively small on either side. Only the front and back of the costume is hole-less.

Then I created the tread wheels on either side. Although the pictures don’t show it, if you look at the costume from the side, you’ll see little gears I made to make it look like the tread was actually following wheels. I folded cardboard on itself and glued it into position for arms. I also inserted to smaller cardboard pieces folded on themselves to make it look like the arm was extendable (which it was slightly). I then hot glued six individual cardboard rectangles for the fingers onto the gloves I bought.

For the head, I created a 2-inch thick or so circle that fit around my head snugly. I then created 3D cardboard eyes that looked like WALL-E’s and then glued the two together. Then you cut squares of the screen mesh to fit around the eye holes so that people aren’t staring directly at your eyes but more at the costume. Keep in mind, that the entire outfit simply requires LOTS of hot glue, but otherwise the outfit becomes EXTREMELY stable.

As for clothing underneath, I wore short black pants, and a black t-shirt. I wore one pair of panty-hose underneath so that my legs were black and cut the other pair in half so that I could use them as sleeves underneath my black t-shirt.

Finally, I coated Wall-E in yellow paint. Then spray painted the wheels, head, and fingers silver. And then I had bought a rust type spray paint that turned out fantastic! The pictures don’t do it justice. And I spray painted sections of the entire outfit with rust. And with a black sharpie I hand drew out all of the lines, and name W A L L – and with a red sharpie made the “E”. And voila, WALL-E is created.

As you can tell already, most of the materials were usable for both of the outfits and cut the cost down. Eve’s costume was just a little bit more expensive, around $24 but took SIGNIFICANTLY less time.

First, ideally you find a WHITE trash can. Unfortunately, our local depot store only had a brown one so we made do. You start by cutting out the bottom of the trash can so that your body will fit within (there’s no other way to put this… but this outfit helps if you’re skinny and/or young). We also cut two semi-circles around opposite eachother at the top of the outfit so that arms can rest easy. The swivel head of the trash can needs to have a large oval/circle cut out of the front were the face will go. The rest of the swivel head then needs to be either hot glued in place, or what we did was we put small holes within the swivel head top and used safety-ties to keep it from moving.

Then you glue a large cut-out of screen mesh to the front of the head. Inside the swivel head we glued an old hat that fit my girlfriend’s head perfectly and glued entirely to the swivel top. Now the entire piece acts just like a helmet. For a cheap and easy set of eyes, we actually found old painters tape and just cut them like crescent moons to act as Eve’s eyes on the screen mesh, the crescent makes it look like she’s laughing and I thought that was appropriate.

For the arms we cut out long ovals and also cut out strips of cardboard to look like fingers. Those, just as the WALL-E fingers were made, were also glued to a pair of gloves. Easiest part here is that everything is simply spray painted white. And voila, EVE is created.

Note: We had an extremely fun night, but be careful where you go. A house party or trick or treating and you’ll get tons of laughs and compliments as we did. Even if people don’t know who you are they appreciate the outfit…

PROBLEM: If you are around young drunk kids (as unfortunately, we were), for some reason tons of people kept bashing on top of my girlfriends helmet- ie her head! And also we had quite a few people punch and kick my cardboard box for WALL-E. This of course is just a testament to be mindful of your surroundings… it was after-all, the Florida vs. Georgia game and there were a LOT of drunk fans where we were. But on a positive note, despite all the hits and bumps/bruises, the costume made it out perfectly fine. Yay HOT GLUE GUNS!!

I hope you enjoyed our homemade Wall E and Eve Halloween costumes. I’ll make sure to post every year… I haven’t bought a costume from a store in several years, this is so much more fun, unique, and I got TONS of compliments. 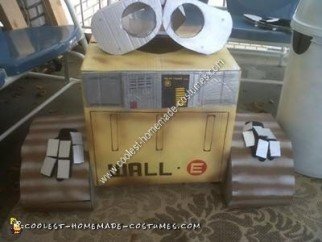 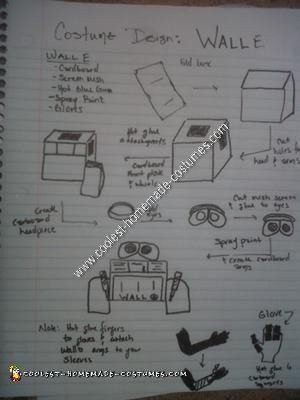 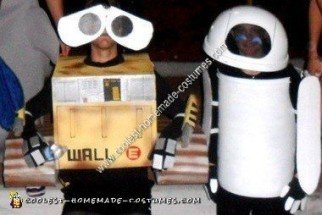