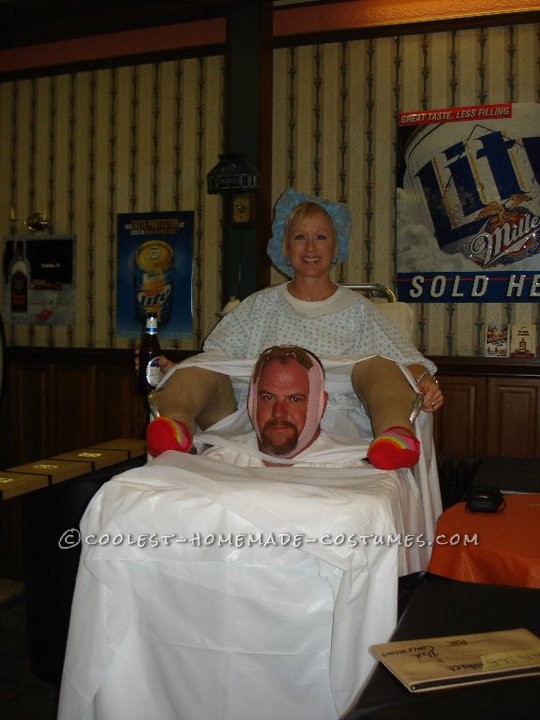 For Halloween 2010, my husband and I constructed what can only be described as a “contraption”, so it appeared that I was giving birth and he was the baby!  We started with a rolling cart used to hold folding chairs and an old funeral home gurney.  We put a base across the bottom of the folding chair cart so that we could both sit on stools, I was sitting on a bar stool type stool and my husband was sitting in front of me on a milk crate.

We then cut the legs off the gurney and attached it to the top of the cart with zip ties, a LOT of zip ties. I then had to construct my “legs”.  For the bottom part of the leg, I used a wire hanger, then stuck a roll of paper towels on each leg, with a tennis ball for the knee cap.  I used a roll of socks for each foot and covered the whole thing with a pair of pantyhose.  I then stuffed thighs with stuffing and added slippers to her “feet”.  The legs were then attached with more zip ties.  We had to figure out the approximate height for the illusion to look real, and started draping the contraption with white plastic tablecloths that would look like sheets.

I had acquired a patient drape and a cap from a doctor’s office.  We had to transport the whole thing on my husband’s trailer, driving it through town.  We had a friend of ours “wheel” us into the party wearing a white lab coat, as if he were the doctor.  Once inside, we were a big hit.  I then “gave birth” to several other people throughout the course of the night because everyone wanted their picture taken! 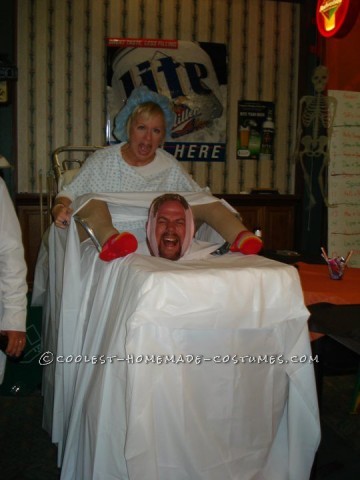 Fun and Interactive Doctor’s Costume for a Single Woman