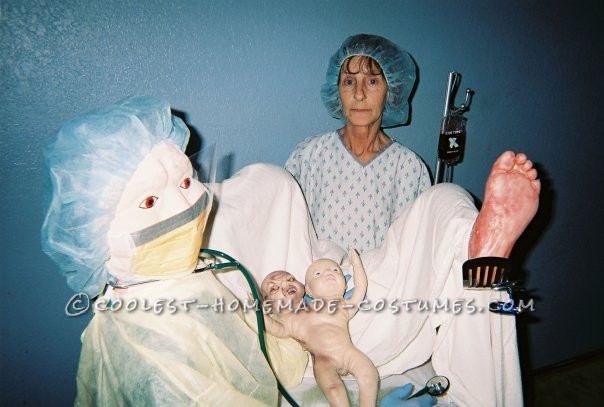 I originally created this Woman Giving Birth to a 2-Headed baby costume in 2004 and it was just made on a thin piece of plywood and I had to carry it by side handles. It was very hard to handle and hard to keep level, but in spite of the trouble, I entered 2 contest and won $250 grand prizes at both places.

So when Halloween 2009 came, I was drawing a total blank as to what to create and it was getting close to the night. Finally asked my retired engineer roommate to modify my costume and make it more stable and level.So he attached my delivery table to a simple portable clothes rack with wheels that I bought at the Dollar General store for $10. I bought 4 $1 white shower curtains from the Dollar Tree  to cover my table to the floor so you couldn’t see the wheels or my real legs underneath.I used the blow up legs from another costume and just taped it securely to the table top in front of the hole that my body comes through to look like legs in stirrups, I wanted to leave both feet exposed, but after looking everywhere possible for a left&right foot, couldn’t be found. So I draped a king size white sheet over both legs and left one foot exposed,(for effect), placed that exposed foot in a bent silver kitchen spatula and attached a small led light on it so that it shown on the 2 headed baby like a spotlight. I used the top half of the blow up doll(from other costume) to make a Dr that I attached to the end of my delivery table and just made him legs with stuffed panty hose,put him in a pair of scrubs,and I had a female friend put on scrubs and come along as my nurse, Voila, the costume then became a $1000 winner!!!.In total it cost me less that $25 to make…I am sure I will rebuild it again ,maybe even better and win $2000 next time! I have a fantastic idea for a good one this year,so wish me Luck until I get it created.. 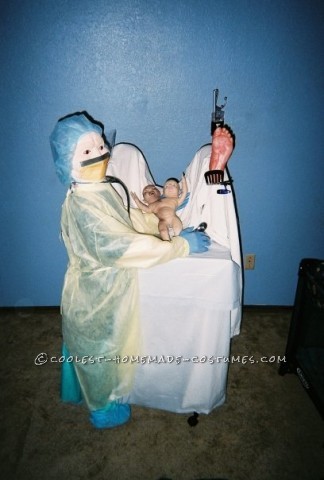 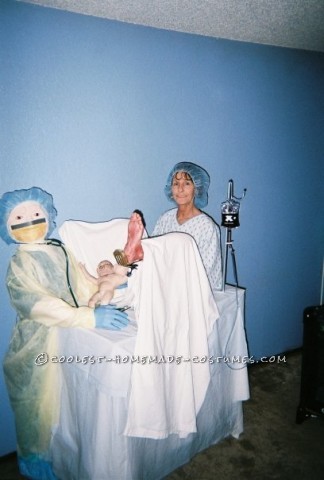