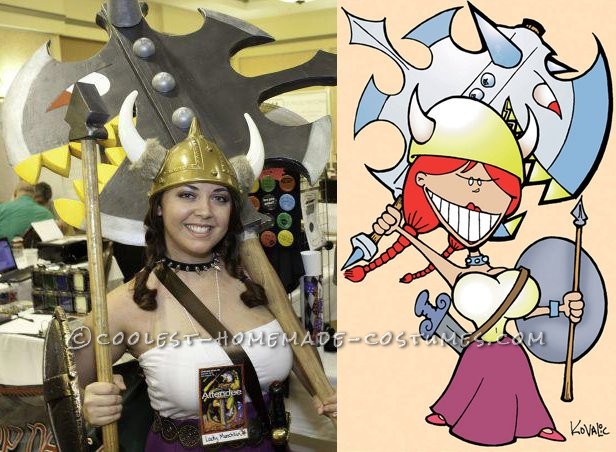 I had to make a costume that was game or anime related that hadn’t been done before, so I decided to go with one of my favorite card games, Munchkin from Steve Jackson Games. The best part was the axe that took the most of my time, effort, and money. How much? I don’t even want to know!

I had never made something like this before, so I asked my friends if someone could help. One did! We started with a basic cardboard outline and then added pink insulation boards to each side of the cardboard with a very long “screw” all the way down the center and sticking out about 5 inches past the edge so I could affix a handle to it later.

Once the glue was dry we… Well… I had a lot of stuff that kept me from my beloved axe, so my friend said he would add everything to it so all I would have to do was paint it! He had about 2 – 3 weeks for this. When I told him I needed it, a week before the deadline, I found out he hadn’t done anything at all to it. So, I went to pick it up and the sleepless nights started.

First I needed to rent a sander. This was fun since I had never used one before! I sanded down the edges to give the axe some nice blades. The teeth I had to sand down by hand. I cut the large rectangles that go along each side down the center a plastered them with papier-mâché . I would have used papier-mâché for the whole axe, but I had no time for such an undertaking. I affixed the “bolts” I made out of simple styrofoam balls cut in half and the pre-made cones. Then I sprayed away with dark silver paint. I was then able to paint the eyes, teeth, and the blades a lighter shade of silver.

Days from the deadline I went to Canton, Texas to visit family. While there I went to their huge flea market open once a month. I found the PERFECT handle amidst many axe handles! My dad was kind enough to put it on the axe body. It was perfect and very strong. I was then able to add the bottom spike to the handle.
The spear point and the spike on the axe handle were each made from simple Styrofoam, papier-mâché, paint, and a broom stick for the spear! I had to use a ribbon to keep the sword on and the choker I had for years.

The rest of the costume was simple. The hat and shield were perfect. I did paint the shield with the last of the silver I had, but it didn’t seem to be enough. It still looked gold. The skirt I made from a dress and the tube top was actually a tank top folded over. The shoes were the only pink shoes I could find. They were almost 2 sizes too big, so I was walking around with socks shoved into the toes so they would stay on!

The only things I didn’t make by hand were the shoes, hat, shield, belt, choker and sword. I didn’t sew the clothes, but they did take some altering.

Description of the included photos: 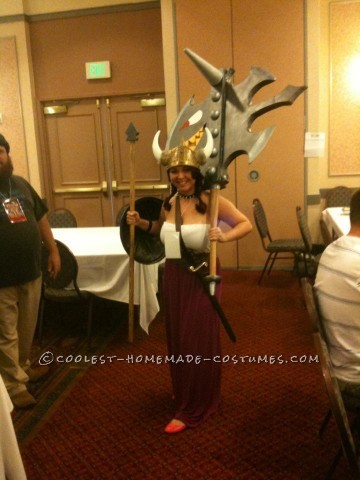 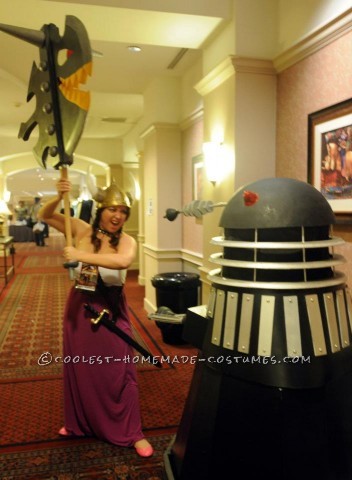