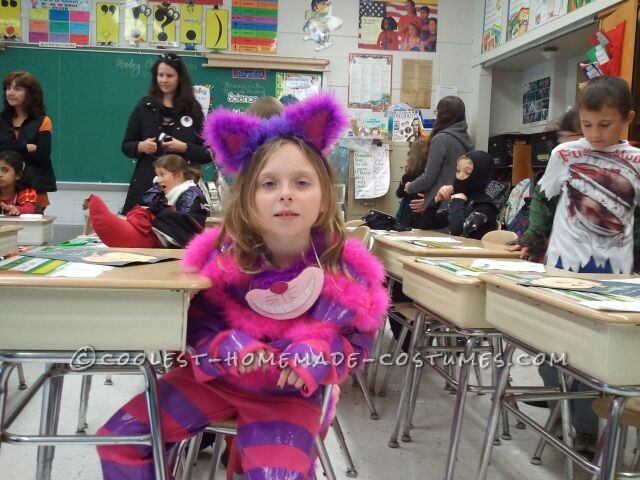 My daughter wanted to be the Cheshire Cat from Alice in Wonderland in the worst way, but the costumes were not what I would want my daughter to wear, some were a little too racey for a young girl.  I decided to create my own costume, and this is the beautiful result of my efforts and her dream!   I had a lot of fun making this costume.  And it was awesome to see the twinkle in my daughter’s eyes each time she got to wear it.

For the BODY, I purchased a pink sweat shirt and sweat pants from Target and turned them inside out since they had images on them, plus the inside material was fleecy which made it look more like fur.  I then proceeded to tape purple duct tape stripes across the shirt and pants.  It takes a bit of doing since the duct tape doesn’t want to adhere to the fleecy material very well.  I then purchased hot pink and purple boa strips from the fabric store.  I cut the strips to size and hot glued them in-between the purple stripes and around the neck and shoulders to make it look furry and add some dimension.  I did this to both the front and back of the shirt.

For the FEET, we purchased fuzzy purple slippers from Walmart .

For the EARS, I took a head band that had purple tulle already on it and made ears out of stiff felt and glued them to the head band.  Then I glued some purple boa around the ears.

For the MOUTH, I copied a page from the Alice in Wonderland book we have and blew it up to the size I wanted.  I then traced it onto a stiff piece of pink felt.  I cut the teeth from a piece of white felt and glued it on, and then I drew the lines for the teeth and whiskers with black marker.  I then cut the shape of the nose from a pink piece of felt and glued that on as well.  I punched a small hole on both sides and ran a thin piece of elastic through it and tied knots on both ends after fitting it to her face.

For the TAIL, I cut a piece of the purple boa and pinned it from the inside of the pants.

Voila, the Cheshire Cat came to life!  Everyone loved it and couldn’t believe that it was homemade. 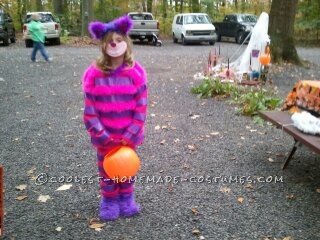