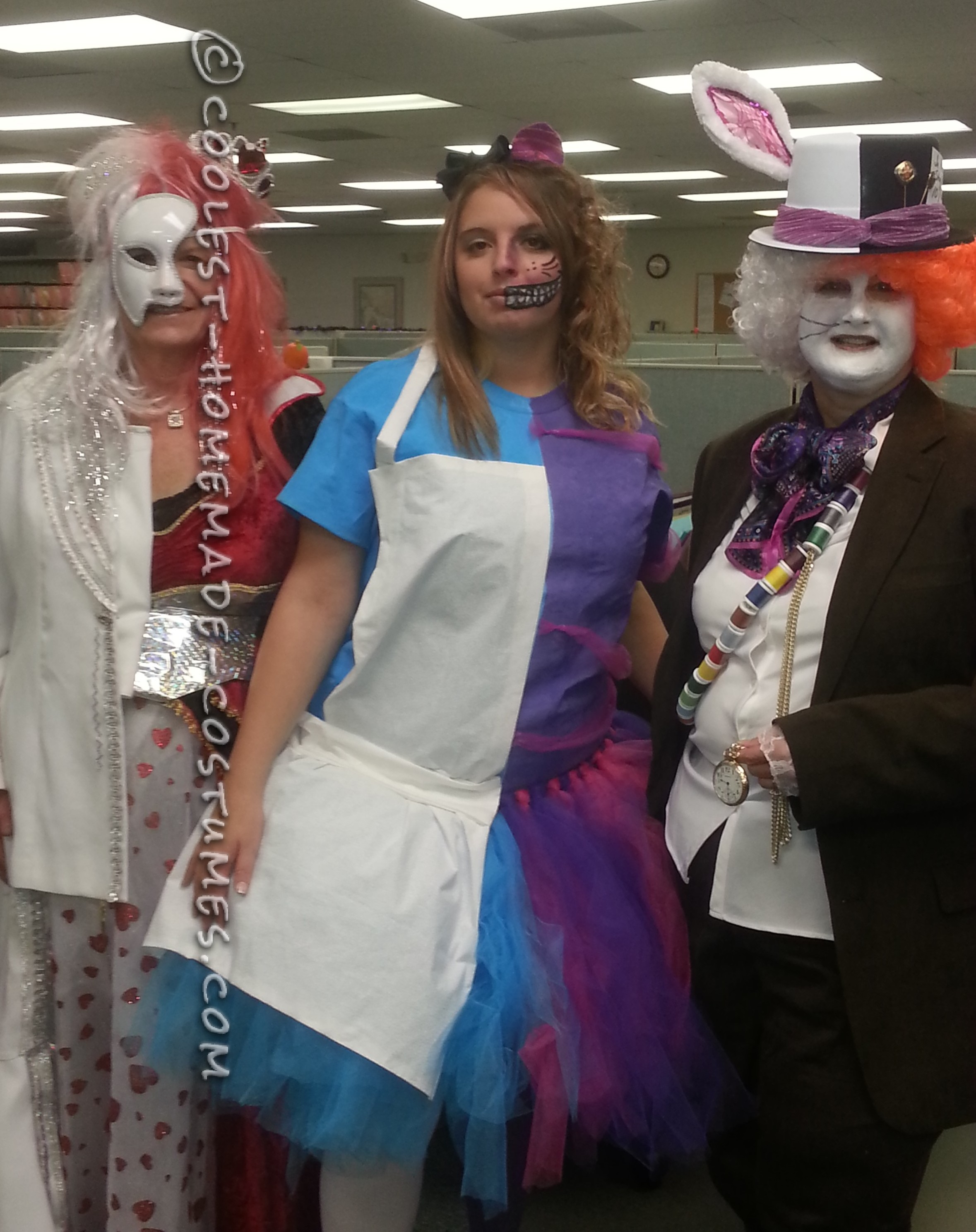 Hi there! At my job, we are BIG on Halloween every year. Everyone dresses up and the groups of people are always different. This year, it was groups of three and it was picked at random by drawing numbers! For the past three years, my group has always won, so I knew we had to do something really unique to stand out. We decided on Alice in Wonderland but with a tWisT! We did “2face”. So, each of us was two characters! I, Elizabeth was Alice and Cheshire the Cat. Tracey was The Crazy Rabbit and Mad Hatter, and Linda was the White Queen and Queen of Hearts.

All of our costumes were completely homemade, except the skirt for the queen of hearts. Linda and Tracey spent time looking through various thrift stores for the perfect pieces to use as the base of their costumes! For me, it was time to make a tutu!

Alice & Cheshire (Elizabeth): I started by 100 yards of blue tulle, 50 yards of purple and 50 yards of pink. I wanted a full and puffy tutu. I looped three strips of tulle together each time on a piece of elastic I measured to fit my waist. After a few evenings of working on the tutu, it was time to start my top. I just bought a plain white shirt from Michaels and a large bottle of purple and blue craft paint. I was very skeptical of the paint working out for the t-shirt, but I thought I should give it a try. I started with the front. I placed a strip of painters tape down the middle to section off the sides for Alice and Cheshire. So I began to paint away, I used cheap sponge brushes to apply the paint. This process took about a week as well as I had to allow time for each side to dry before shifting the tape for the other half and flipping it over to do the back.

As a finishing touch on the top, I added a few “pink strips”. I did this by adding some extra pink tulle. My next step was to make the apron for my Alice side of the costume. I bought 3/4th yards of a nice white fabric. I liked that it had a little subtle floral print on it. I free-handedly cut enough to cover the Alice side of the tutu. Using hot glue, I added pleats to the front and made a sash. Once I hot glued the sash and apron together, I then glued that to the tutu (on the blue side) itself. I then made the top half of the apron by cutting a piece about 3/4th the length of the shirt. I hot glued the edges back, then glued the top of the apron to the blue side of the shirt. So, for the legs, I got a pair of white tights and died one leg purple and left the other one white for Alice.

I took a black $ store head band and added a large black bow (on the Alice side) and a purple and pink cat ear (on the Cheshire side). For my hair, I added some foam curls to one half and straightened the other; you can see this step in my photos. My favorite part was doing the make up, I have never worked with any kind of make for Halloween. I applied some base make up and did my normal everyday make up on the Alice side of my face, that was the easy part. For the Cheshire side, I used an eye liner crayon (elf brand) to draw the outline of the mouth on my face. I filled the outline in with white Halloween makeup. I used a q-tip to help near the black lines.

While that dried, I went on to do my nose and eyes. I used the eye liner and added a small black line just above my nostril, hot pink eye shadow on the tip of my nose and then I used purple eye shadows on the side of my nose up to my eye. I used black shadow and liner along with different shades of purple and did a smoky eye type look. Back to my mouth, I used the black liner to draw in outlines making teeth! Once I completed that, I added some whiskers, again with the liner and I was done! Done until I looked at my nails. I decided to paint my nails purple on one hand and a pretty nude color on the other for Alice.

All that was left to do was to put it all on and show it off! I had a blast trying to get this all together and trying to figure out how I would even do it in the first place. I got tons of compliments and was an awesome piece of my group! We won second place to the group who dressed as kiss! Four years in a row now my group has won in the Halloween Contest!

White Queen and Queen of Hearts (Linda): Well, my adventure started at Sacks 5th  Avenue Thrift Store in search of the right dress I could cut in half to be Queen of Hearts on one side and the White Queen on the other. I am not a seamstress , so I went to the fabric store and bought a bottle of liquid mending , peel and stick strips, and strips of Velcro. Finally, I found the right outfit and started the transformation, but soon would find out that it wasn’t as easy as I first thought. I racked my brain on what to do for the Queen of Hearts side and finally broke down and ordered a cut outfit on sale through Amazon (has everything you need under the sun, and then some, I love Amazon). So, I had a $40 costume I had to cut in half and attach to another dress and make it into one!

I bought glitter and faux diamond strips to glam out my White Queen side ( I even had rhinestone diamond  buttons). I found a goody white haired wig at the Party Store and sprayed half with red hair dye. Countless hours of Gorilla Glue heaven (used when the liquid tape and adhesive strips didn’t do the trick) trying to attach my two sides to combine into one costume. After adding all of the faux diamonds and strips of glitter on my white side, it weighed about 10 lbs.! I had two extra layers to conceal the red skirt I had on for the Queen of Hearts. Finally made it to the contest and met up with my two partners in crime to parade ourselves with the other contestants and justice prevails; we won 2nd Place! I was pleasantly surprised after the ordeal I had been through trying to get my half and half together.

Mad Hatter and the White Rabbit (Tracey): I was the Mad Hatter and the White Rabbit from Alice in Wonderland. First, I bought two cheap plastic party hats (about $2 each), one black, the other white. I cut each in half and stacked them together. I used a pink scarf as a band on the hats to hold them together. I bought a head band with bunny ears. I cut a hole on one side of the hat and pulled one bunny ear through. I folded the other ear down and left it under the hat. Then I bought a white curly wig and sprayed half of it orange for the Mad Hatter. I wore a man’s coat with a white shirt and brown capris.  The bunny ears came with a white tail and I pinned it to the back of the coat and a lace glove that I wore on my left hand just to add a little flare, Johnny Depp style. I used one crazy sock and dark shoe for the Mad Hatter and a white sock and white shoe for the White Rabbit. I used a long scarf and tied it into a bow. To finish off the look, I made a string with spools of thread from my sewing kit for the Mad Hatter and an old pocket watch from my jewelry box for the White Rabbit. Makeup was easy using white all over my face with orange eye shadow around my left eye and pink on my right eye. I used black eyeliner to add whiskers for the rabbit. Total cost was around $25.

We each had a great time working together and winning of course! 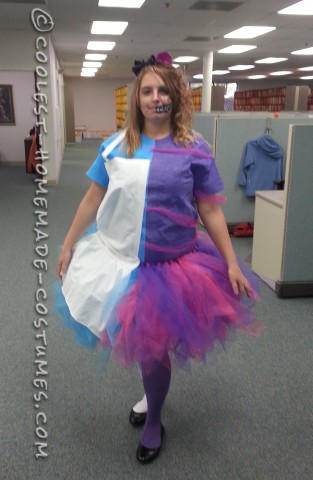 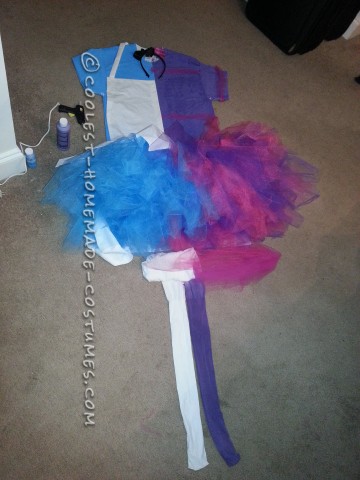 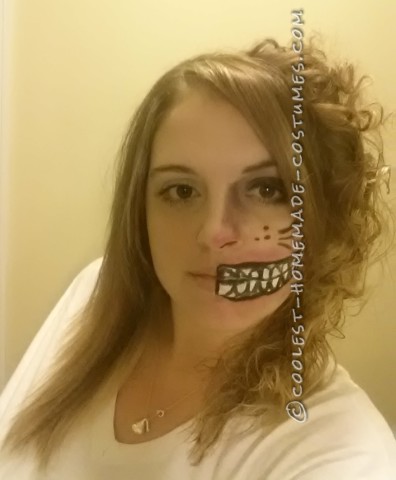