This is what you need for this Alice in Wonderland Costume :

The hat was a St. Patrick’s Day hat I had from a few years back…. Covered the top of the hat in the bright pink felt and rapped purple ribbon around it. Hot glued rabbit ears we had taken off a headband, then glued on the big bow which we made out of white felt and glued black felt circles to it and secured it with a bunch of the red roses in the middle. On the side of the hat is a piece of cardboard and we wrote “In this style 10/20” which is what the mad hatter had on his hat from the storybook. (We also had to glue a round container into of the original hat to make it stiff and not droopy.)

The shirt is a white dress shirt with a built in black vest with silver stripes we purchase years ago. All we did was glue a red bow to the left sleeve and red heart down the back of the shirt.

Just cut the material from an old pair of alice in wonderland scrubs.

As worn by the white rabbit from the storybook……..
We took some white felt and cut it to shape. Hot glued red and black cut outs of hearts to it and also some smaller red hearts and black spades to outline the bottom curve. Then black felt lines were glued to outline and box off all the hearts. Also attached one purple and one pink ribbon to the top of chest piece and ran them down the back of the shirt and secured it to the tutus to look like suspenders from the back.

Small Styrofoam plate with a computer print out of a clock glued to the middle, then outlined in yellow foam and red pipe cleaners.

We bought some platform boots at a flea market. Covered one boot in layers of pink and purple felt stripes (to mimic the Cheshire cat’s stripes) and the other in layers of black and red felt stripes (to mimic the colors of the red queen). Glue green paper grass to the front of the boots. Then we glued mini playing cards to the boots as well as many other things that went with the alice theme (clocks, tea pots, the bottle with a ‘drink me’ note, a piece of cake that says ‘eat me’, an up-side-down flamingo, red roses, white roses that we painted partially red, blue caterpillar we made out of blue craft balls, and red mushrooms made out of clay) 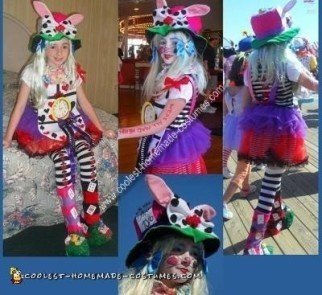 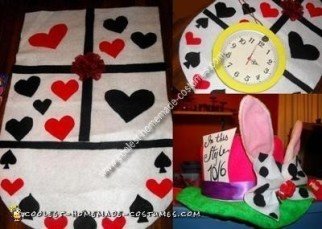 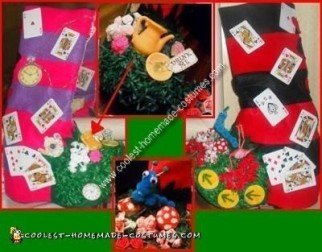