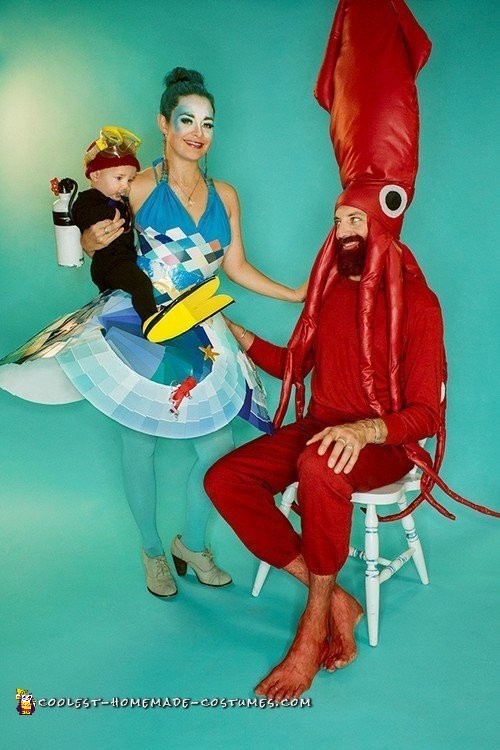 I’m not sure where this trait came from, but I am a bit obsessed with costumes. I will spend time that I don’t have to hand craft extravagant costumes that will be worn for an hour or so. Why? I’m not sure. I just can’t seem to help myself. Being that this is Archie’s first Halloween, I decided it should be a good one.

I love all things Wes Anderson, Life Aquatic, The Beatles Yellow Submarine and of course, Jacques Cousteau. It seemed only appropriate that “Adventure Baby” (our nickname for Archie) be dressed as a mini scuba diver. I chose to go as an abstract representation of The Ocean, and Dad is a fantastic Giant Squid.

For The Baby Scuba Diver costume, Josh dismantled a spigot head for the oxygen tank regulator which I then taped to the top of my well used Sigg Bottle.  We also taped a section of flexible black tubing from the top of the Sigg Bottle lid to the handle of a pacifier. Josh fashioned the chest harness out of old climber’s webbing that he had stored for projects not like this. The swim fins were made from spray painted cardboard, yellow foam, and electrical tape. I made custom paper footbeds for comfort and ease of entry. Before he was born, his Aunt Lexi made the amazing Jacques Cousteau / Team Zissou red stocking cap. The scuba goggles were ones that we already had kicking around. Surprisingly- they weren’t crazy big. Shockingly, the crux of the outfit was finding a plain long sleeved black onesie without any logo junk on it. I had to special order that online.

The Ocean dress was fairly time consuming and complex. I got the idea to “procure” a bunch of sea colored paint swatches from several hardware stores. (Feeling bad- I called a paint store in advance, asking about the possibility of using out-of-date, discarded paint swatches, being that I required so many. This wasn’t a possibility- they don’t keep old ones, but I was assured that I could take as many as I needed.)

My first attempt was to roll up individual paper waves from each swatch- then staple them onto my blue dress. For one thing- this didn’t read as very “oceany” – and I quickly realized that this dress was not only going to be terribly uncomfortable, but also a pill to get into. Redirect, so I concocted the brilliant idea to make a sturdy and removable cardboard corset armature that I could adhere my swatches too. I wove some ribbon into the bodice so I could tie it in the back. It worked brilliantly.

Using a million or so staples, I created then attached large gradient waves of swatches to the armature. I then hot glued felt lining to the inside where the dress would touch my body. (So I didn’t die). I painted my hair blue with some temporary hair paint- and had my sister do my face paint. She did a spectacular job. I finished off the costume with a crown made from starts that I cut from more paint swatches and hot glued to glow sticks. Its a good thing that the paper dress is removable- because its impossible to sit or ride in a car. I had to stand all night long while waiting to get judged. It was worth it.

The Giant Squid was made from 2 yards of red vinyl table cloth material with a fuzzy fleece backing. I hand drew a pattern onto several brown paper bags, and used those to cut out my shapes. I decided against hand stitching – because I wanted to use the costume this year. So, I employed the help from my sweet mother in law and her sewing machine. She agreed and spent two days helping me piece this monster together. One of the challenges was turning the skinny legs inside out after stitching. An ingenious solution- we placed a long strip of electrical tape along the inside of the leg before stitching two pieces together. When the tape is pulled out- it turns out the leg gradually and perfectly – a real time saver.

To make the legs curly- I taped old socks around long segments of wire and inserted them into each leg before they were stitched to the head piece. Getting that head to stand up by itself was its own hurdle. I ended up cutting out a long piece of cardboard and reinforcing it with stiff plastic tubing and wire. I gave it some volume with buffalo snow. The rest of the costume consisted of red hair spray in Josh’s beard, face paint on his feet, red sweat pants and a red turtle neck. On a side note- Josh couldn’t really stand up in a building with this costume on. Without the squid head he stands 6’7″ tall. And the full size of the head is 36″. It was a spectacle!

After Halloween, I will be removing the stiff armature from the head of the Giant Squid, stuffing it with soft pillow fill, adding four additional tentacles, and transitioning this costume into a giant pillow toy to hang in Archie’s bedroom. 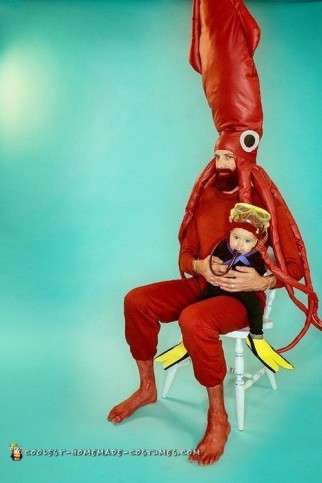 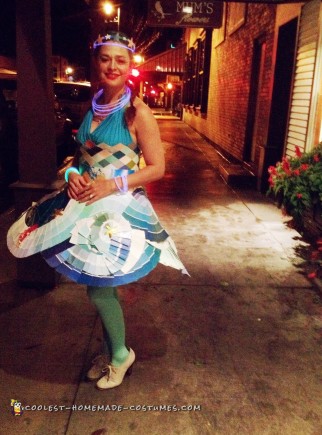