This year my son 7 year old son Aiden wanted to a Jellyfish costume. His class is currently studying sea creatures and he loves reading about jellyfish & starfish.

First, I used a clear bubble umbrella for the frame of the jelly. I covered the frame with rolled up bubble wrap, spiraled from top to bottom. Next, I covered the bubble wrap with a blue iridescent blue fabric. This part was a little tricky, I pinned the fabric with safety pins first, then when I got the placement of the fabric complete I used a glue gun to secure the fabric to the umbrella.

People really enjoyed this Jellyfish costume, especially at night when it was all lit up. The challenge was that the costume was a little on the heavy side so we helped him carrying it when needed. The scuba diver part of the costume was made from two water bottles painted silver with reflective and electrical tape, electrical cord tubing was attached to the top of the water bottles with a piece of pipe insulation for the mouth piece complete with a pacifier for the mouth piece.

The belt was made from a nylon strap with clip together attachments, weights were made from a scouring towel from the dollar store, and a light up jellyfish was attached to the belt in a mesh bag.

Final touch, fins made from foam & duct tape, and a scuba mask. Aiden loved wearing this Jellyfish costume & wears all the scuba stuff around the house still. This costume won a prize in the most creative costume category. 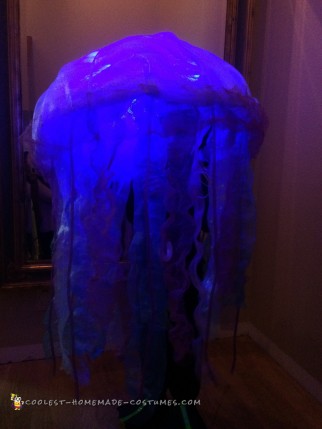 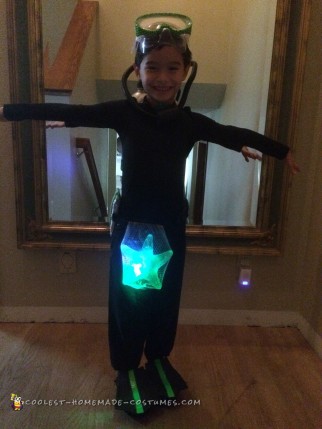 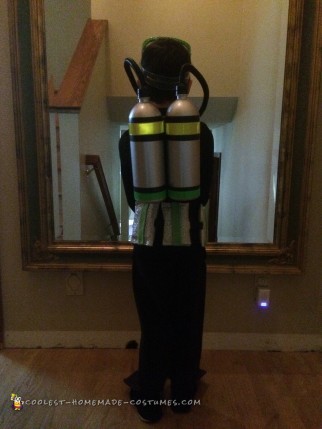 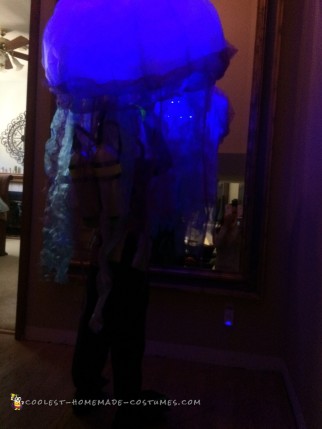