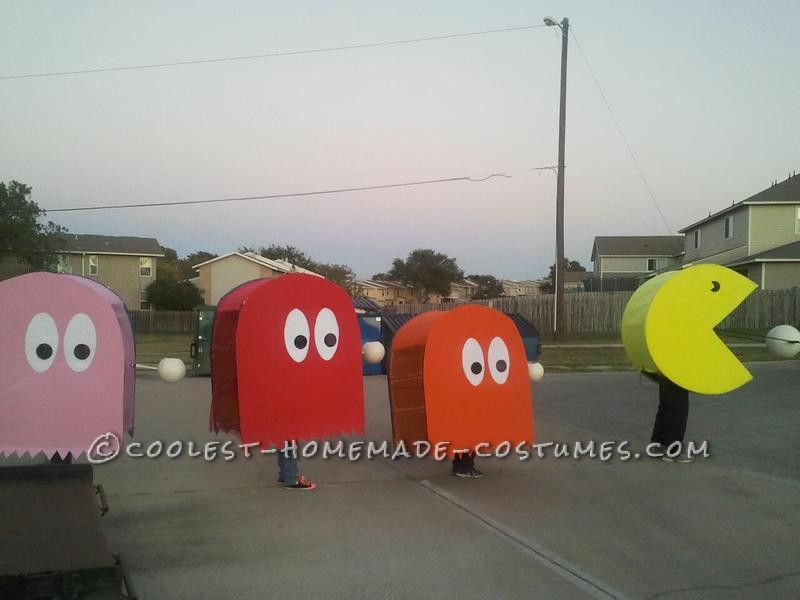 In mid September I was in the van with the kids and brought up the fact that we need to do another family costume. In 2009 we did the Incredibles and 2010 we did Tetris. Several ideas came about, but we finally agreed on a Pacman family Halloween costume.  We discussed ideas and began searching Google images as we were still heading down the road.

As we went through many pictures, only one design looked like something I wanted to do. The next day I went and walked the aisles of Home Depot and Lowe’s like a mad scientist pondering all the possibilities. As I stood in the wood aisle testing the pliability of wood, I would get asked if I needed help. I would bounce my idea off of them just to see what they would think. From that point on is when I decided to go ahead and dive into it.

The set as the sit waiting for the next morning at work.

My original plan was to do the Pac-Man and then make the ghosts in a similar manner. I started with a whole bunch of 3/4″ square dowels,  two 14 foot strips of flat lattice, some Gorilla glue, brad nails for my stapler, and a 8 ft sheet of Styrofoam insulation. I made a center point and basically made it like a spoke wheel. At first I really messed it up and then went out and got me a square/triangle.

From that point on, things really began to fit in place. Once I completed one side, I moved to making the other only to find I messed up by a 1/2 inch. No matter, some minor cutting and gluing and I was able to make two near identical sides. I then made a hole in the center of the spoke area and used a round dowel to start the connection of the two sides while adding more square dowels to connect both sides all the way around. I then made a bit of a ruck frame in the middle and attached some ruck straps and butt strap from an Army surplus store.

With the round dowel in the middle, I had intentions of using it as a pivot point to make a functioning mouth, however, after 3 days of scrapping through ideas, and the fact we were already in October, I gave up that idea and went with a static open mouth. I cut two 4 ft circle out of the Styrofoam and used Great Stuff expanding foam to hold them up under the lattice and against the frame. I also used the foam to make a large pile to make a pocket for my mobile speaker. I then found some cheap yellow fabric and hot glued it to the lattice.

I glued some mesh material inside the mouth and used black duck tape to hide the mess of the glue. As for the power pellet hanging out front, when I made the 8 prong spoke, all of them were about 24″ long, except for the two up front, in which I left them at their original 36″. I then papier-mâchéd a 15″ toy ball, took the ball out and used two more dowels, and glued it to the 36″ dowels. At first I thought it would be to heavy, but it managed to work out. 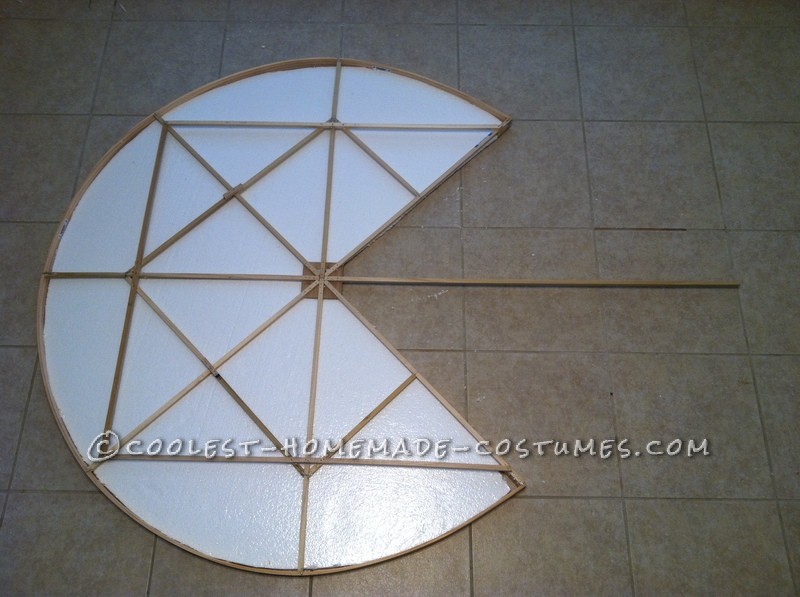 One side of Pac-Man Frame

As for the ghosts, I started to use the same wood as the Pac-Man, however, it was splitting and breaking, so I went with the idea of CPVC that I saw Matthew Varas use. I made some minor adjustments to the measurements and made them a bit shorter, but a bit wider. I also used a 10″ toy ball in papier-mâché to make the pellets in front of them, as intentions for trick-or-treat baskets. On the inside I made a small frame from some 1 1/4″ wood and the leftover lattice and attached some more ruck sack parts from the Army Store.

I used cotton fabric for the solid colors and color matching tulle for the front and back. Though it did not really conceal them, it still gave the image of a solid color and allowed them to see and get plenty of air. As for the sides, I received some large cardboard pieces from Lowe’s and hot glued the fabric to the back side of them so that the glue was not exposed. I then used some white felt as the eyes with some crafting glue. As for the pupils of the eyes, I actually cut holes all the way through and used the same mesh material I had in the Pac-Man. My intentions for this was to allow for some side vision for the kids, but it ended up being too low for them to see out of. I then used Great Stuff expanding foam to attach the cardboard to the frame. Once I made one ghost, the other two were done in no time flat. 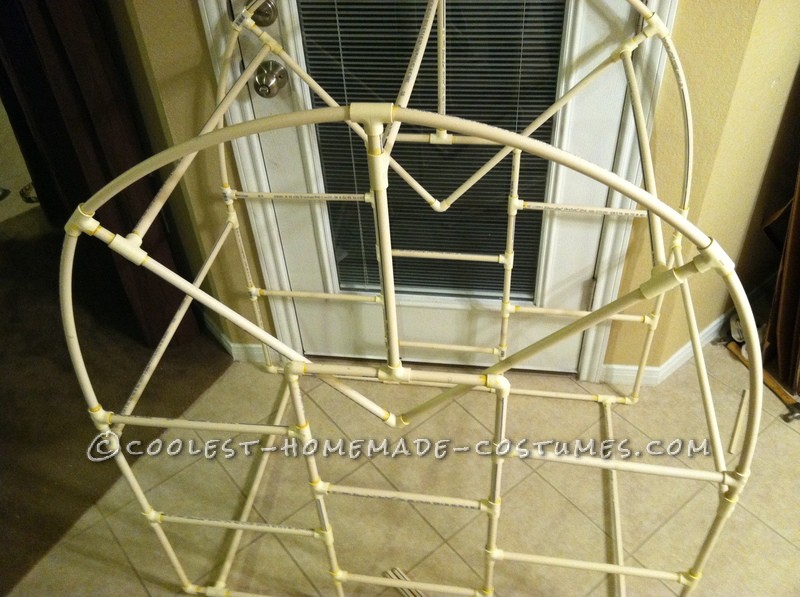 As for transporting them, that became a new nightmare. They were so big that only one ghost could fit in my van. So, we rented a Uhaul van to transport the other three. They were the hit of the town as we actually wore them four times. Once on Saturday with just the Pac-Man and Blinky. Then on Sunday as a full set. On Halloween day I had some co-workers wear the ghosts in the morning for a company function. I ended up winning a four day pass. That evening we went trick-or-treating and think we got to feel what it must be like to be famous. People were constantly taking our pictures. Next year I think we are going to do something similar, but not quite as big.