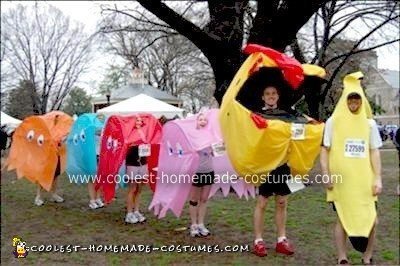 It was four days before the big day and Tim and I were still struggling to fit half a hula-hoop into an elbow joint of PVC that was oozing with bathroom caulk and epoxy. How were we going to make four identical Ms. Pac-man ghosts to win the group costume contest? Our vision was to recreate the famous 1980’s arcade game: four colored ghosts chasing Ms. Pac-man who would chase a banana.

Tim is an IT network administrator and I work in Marketing with enterprise CRM software. He was logistics and I was concepts, both technically savvy. In this case, we couldn’t exactly Google the specifications for these costumes that had to be lightweight, look like cartoon ghosts and a yellow round sphere for Ms. Pac-man. We tried many materials for the frame: coat hangers, fencepost wire, wood; we even tried to cast our own metal into grooves in Tim’s backyard. It was a constant struggle to find the materials that would work, and we were forced to think more creatively and use our resourcefulness to bring the idea to life.

The final Homemade Pacman Group Halloween Costume consisted of colored plastic table cloths hung over two half hula hoops mounted into a rectangle PVC frame that a person wore on their shoulders using two wide bed sheet strips and stabilized by a rope at the front and the back that connected to a belt with two carabineers. It was a great feat of engineering.

Besides the materials, it’s not easy trying to convince your friends to be burdened by a 4’ x 3’ costume worn on the shoulders, and connected to your other teammates by little white squares and fishing line (the white dots in the game), was going to be easy. Or that halfway through the day they were to don the reserve blue costumes and be chased by Ms. Pac-man to remain true to the game-like conditions. And of course, someone had to be Ms. Pac-man.

So there we were, a colorful cast of characters, six of us tethered together, unable to see much from our periphery. It was legendary. Kids oohed and squealed at the “dragon” or “teletubbies,” adults chuckled at the memories of their teenage arcade game.

Was it by portraying an American pop culture icon, touching the Judges hearts with a moment of nostalgia, or changing mid-way into blue coverings, these costumes themselves a tortuous joyful construction that won 1st prize for us? I believe that it was the simple determination of our costumed friends that we would see this idea through to the finish with some of the most hard-to-create and hard-to-walk-in costumes the judges had ever seen.