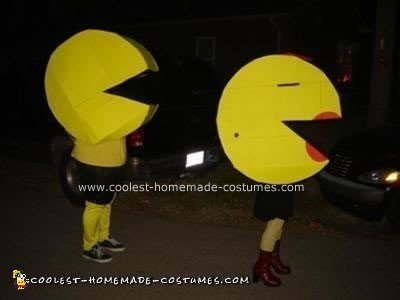 Working at GameStop Chad brought me several large cardboard boxes. We went to Wal-Mart and he picked out the perfect “Pac-Man” shade of yellow paint and we bought an over-sized red Christmas bow. I guess that is one good thing having all the Christmas stuff out in October!

I borrowed a hula-hoop and traced out 4 large circles. I cut a pie slice out of each of the circles for the open mouth; it was very important to Chad that the mouth be open and not to just be painted black. I also cut a little slit in the underside of the mouths so we could see where we were going.

Then using packaging tape I taped cardboard in between the circles. I used wide masking tape for added security on the outside. I left a good size opening at the bottom and the costume rested nicely on our heads. Chad helped me paint and I added the little touches to Ms. Pac-Man, the lipstick, eye and beauty mark. I poked a little hole in the top of the costume to attach the red bow.

We went to the local costume store and bought yellow hose for the both of us. Chad wore his Pac Attack shirt and black shorts underneath the costume while I wore a yellow tank top and black skirt with my red boots. We went to three Halloween parties to show off our costumes and we where the hit at all three! 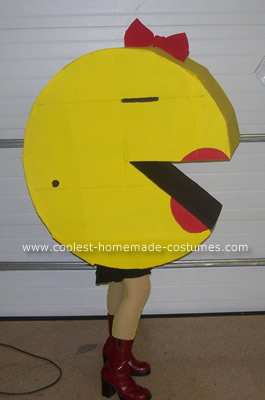 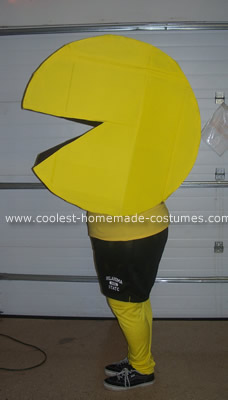 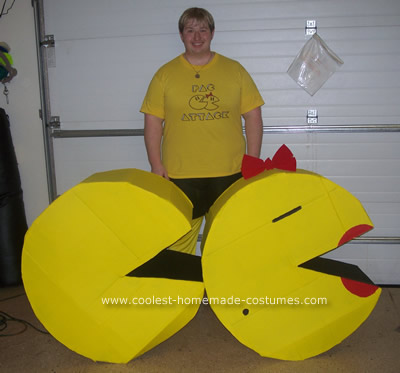