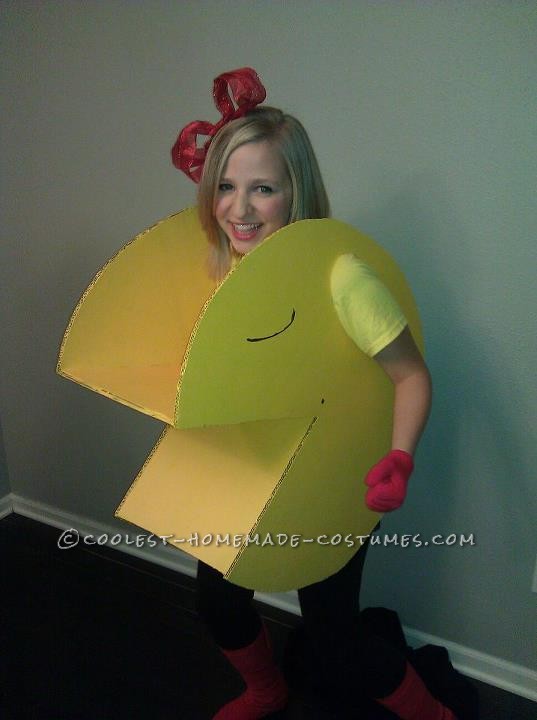 It was mid-October of last year when I had finally decided not to dress up for the upcoming Halloween. I had no plans, so why bother? Then I received an invitation to a Halloween party complete with a costume contest. I’m not usually one to let competition go to waste, so I had to come up with something quickly. I was rummaging through ideas in my head, thinking of my favorite characters and past costumes that I could adapt. I don’t know what struck the idea, but I eventually had the idea to bring my favorite video game character to life: Ms. Pac-Man!

The materials I used included cardboard, an xacto knife, paint and brushes, mod podge, red gloves, red boots, a yellow t-shirt, and red ribbon. I constructed it by cutting out two cirlces with V’s cut into them with an xacto knife, as well as a large rectangle that would fold and fit into the mouth area. The rest of the cardboard part of the costume was opened. I folded the rectangle and glued it’s edges along the V cut-outs of the two side pieces to create a 3D costume that I could fit into  (there are also arm holes cut into the side pieces). Once the pieces were glued together with the modpodge, I painted it yellow. I later added to slits for the eyes and a beauty mark with paint. I completed the easy Ms. Pac-Man costume with red gloves, red boots, and a red bow in my hair.

The costume was a hit! I won the costume contest, beating an Angry Bird and some gruesome looking zombies. Several people that I ran into for months after the party couldn’t remember my actual name, but instead called me Ms. Pac-Man, which I proudly answered to! Hopefully I will have a chance to use this costume again because people loved it and it was so much fun! Perhaps I can requisition a few ghosts as an entourage in the future. 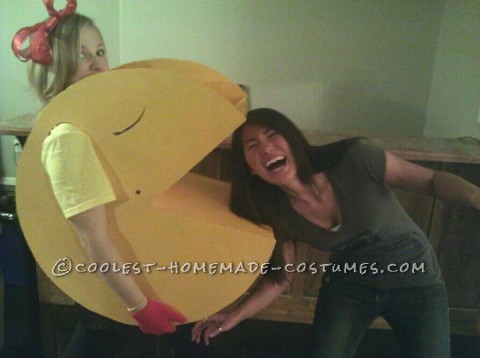