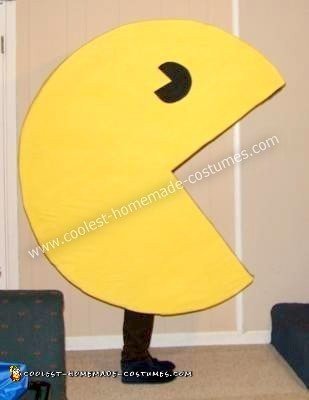 I used to love to play Pac-Man on my Atari when I was a kid in the 1980s, so that was my Homemade Pac Man Halloween Costume this year. After looking at pictures and instructions on various web sites, including this one, I decided to use cardboard and duct tape to make my Pac-Man’s body. I had several large cardboard boxes left over from various items that I had bought over the summer large enough to make my Pac-Man 50 inches in diameter and 19 inches wide.

I opened the boxes at the seams to lie flat and, using a homemade compass of string and a pencil, drew the 50 inch diameter circle. After cutting it out with a box cutter, I used it as a template to trace the other circle so that they would match as evenly as possible. I then cut a wedge out of both circles to make the opening for the mouth. (Top and bottom of the mouth were 25 inches in length.)

The long box that I used for the rounded side of Pac-Man happened to be 19 inches wide once I opened it up at the seams. It was thin cardboard, so I easily rolled it starting at the short ends so that it would gently curve to fit the circles. Now I was ready to fit the three main pieces together using lots of duct tape.

Since I needed an opening at the bottom in order to fit into the costume, I left almost 2 feet of space and then added another rounded piece of cardboard from the corner of the bottom part of the mouth working back. The second circle and cardboard for the top and bottom of the mouth were then added to finish the structure of the body. I taped both sides of all the edges for extra support.

To give Pac-Man his bright yellow finish, I used 5 yards of flannel cloth. Unfortunately, when I got it home and laid it out on the cardboard, I could see through it to the duct tape and the printing on the boxes that I had used. (I should have faced the plain insides of the boxes out and used brown tape or bought a thicker fabric.)

Using scrap white paper and Modge Podge, I covered Pac-Man’s entire body so that nothing would show through the flannel. After allowing the body to dry, I laid the flannel flat on top of one of the circles and roughly cut around it to leave 1 to 2 inches extra hanging down to glue over the side so that the edges wouldn’t show.

Using fabric glue (and Modge Podge when it ran out), I applied it to the body with a paint brush and smoothed out the flannel as I went along. I had to cut slits in the cloth that hung down over the edges before gluing it so that it would lie flat. After it dried, I turned Pac-Man over and applied the flannel to the other circle in the same way.

To apply the flannel to the rounded side of Pac-Man, I used the finished edge of the flannel (not a cut edge) and glued it to the very edge of the circle, going all the way around. I then cut off the extra and finished gluing it to the form. To make a window so that I could see out of the costume, I cut a rectangle about 9 ½ x 9 inches in the roof of the mouth and taped a black plastic canvas on the inside using duct tape. (I could see through the canvas just fine, but people had trouble seeing me on the inside of the costume.) I used black felt to cover the rest of the roof and the bottom of the mouth. Black felt was also used to make Pac-Man’s eyes.

After drying overnight, Pac-Man was ready to go! I wore black pants and black shoes so that I wouldn’t draw attention away from the rest of the costume. It was not very heavy to wear, and I alternated balancing him on top of my head and holding him up with my arms, especially when walking. All together, I spent about $30 and 20 hours to make this Homemade Pac Man Halloween Costume.