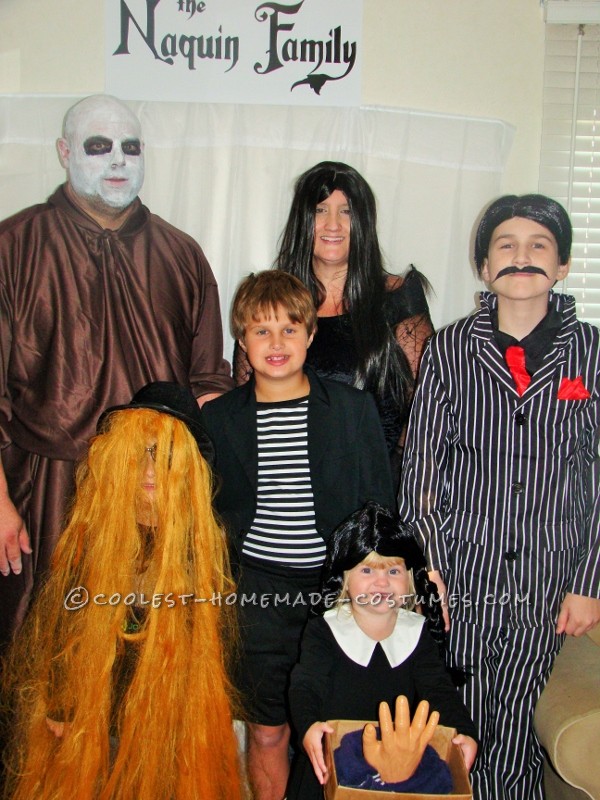 As a family, we have been dressing up for four years now. We were the Flintstones last year and right after Halloween ended, my husband suggested to the kids that we dress as the Addams Family next year. Our eleven year old that has been saying for the last few years that he was getting too old to continue to dress-up, was excited to do it because he loves the theme song. Our youngest son was “who? or what is the Addams Family?” since he was only four at the time and has no idea of who they were. I asked if they all wanted to do it and showed them a picture of who we all could be.

My husband who is partly bald (isn’t bald sexy) :) always wants to be the bald character (he was Mr. Slate for our Flintstones costumes), so he said he would be Uncle Fester, which leaves our oldest son as my husband. (see I told you; kooky, spooky, ooky ;) lol!) He was Fred when we were The Flintstones.

I immediately started thinking about what we could do. I found a black velvet dress at Goodwill that would work for our daughter as Wednesday Addams, but it was a size 4. I was going to see if my mother could sew it (since I don’t sew too “well”) and hot-glue almost everything I make. Just call me the “Hot Glue Queen”! Now, there is an idea for a costume! However, I went back with her to get it, and it was gone. Okay, now on to Plan B. I did still have 11 months to do everything, so it was okay. Lol! Walmart marked their Halloween costumes down after a month, and I happened to find a monk costume within all the picked over costumes.

Yippee! One costume down for Uncle Fester, but I had to store it for a year. The “scary” part would be to remember where I stored it when it came time for Halloween this year! ;) Thankfully, I did. :)

Yippee #2, When August rolled around, I started to search for the rest of the costumes, since I had four to purchase or make (Morticia- me, Gomez-our oldest son, Pugsley- our second oldest son, and Wednesday- our daughter since the Goodwill dress was a no-go. I was making our youngest boy’s Cousin It costume. I was able to purchase Gomez at Party City which was a Gangster costume because it is cheaper than a regular pin-striped suit at any department store in the mall. I also could not find one at any consignment stores either, so Thank you Party City.

Pugsley was a black and white striped t-shirt matched with a pair of black shorts, socks, and shoes we already owned. The jacket was from his costume that he wore last year. Thank you for leftovers. ;) You would think that a black and white t-shirt would be easy to find, but between eBay, Etsy, and many, many stores, it proved to be the hardest of all to where I was about to make it with either a plain white shirt and black paint or electrical/duct tape. A friend suggested the local prison, I didn’t think that was the best idea! During the last few weeks, I gave it one more try, and I was able to locate one.

Yippee #3, Wednesday and Morticia was found on-line and did not require much effort. For some reason, women and girl clothes are not that hard to find! Hmmmm?! I wonder why?

Yippee #4,  I started making Cousin It with yarn, but after cutting over a couple of hundred pieces of yarn, I realized it would take a lot more, and I should have started cutting after last Halloween, lol! I started to look for another way to do it, and I was going to do it with half pieces of hula skirts, but you don’t find hula skirts that easily this time of the year. I had an idea to go to a supply store in our home town that carries wigs, and they had braid wigs that worked well. I only needed six that I hot-glued inside a black derby hat, and we finished off the look with a black pair of glasses.

Yippee #5, My husband finished off his Uncle Fester costume with some black and white face paint purchased from Wal-Mart.

Everyone we saw loved our costumes, and we had fun dressing up. It was a little crazy trying to get the pictures with everyone in it, but I think we were able to capture a few for you all to enjoy.

Yippee #6, Now, if anyone would enjoy coming help us clean up the hair from Cousin It’s costume because after several days, we continue to find it in several places throughout our home, lol! Happy Halloween Everyone. Hope it was a safe and blessed one. 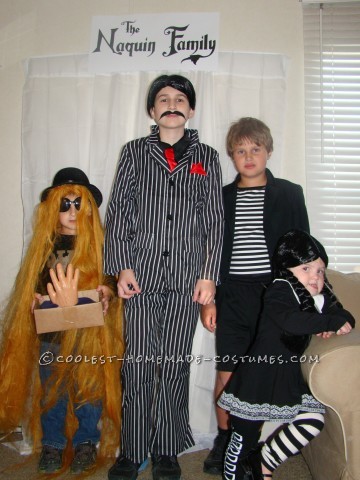 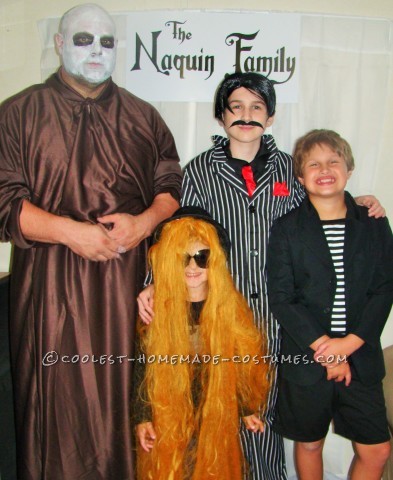 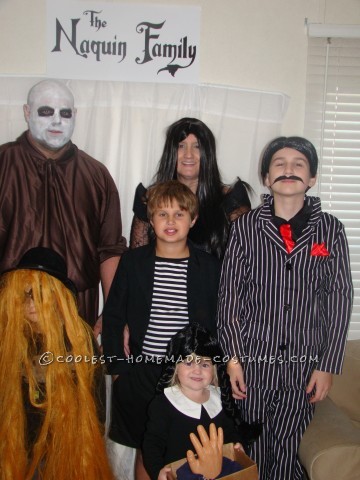 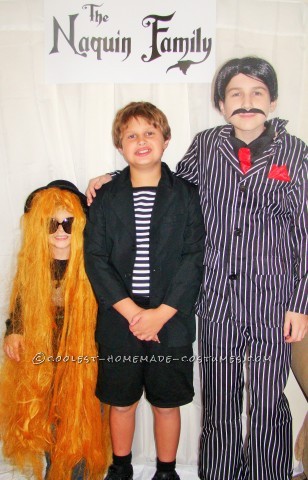